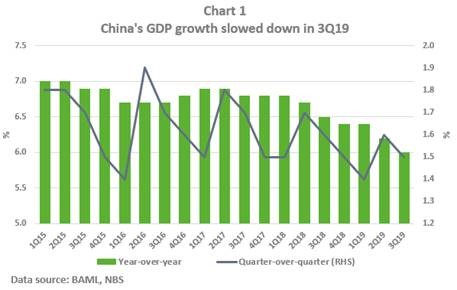 Despite that, PBOC unexpectedly kept the third fixing of the 1yr LPR unchanged at 4.20% and also left the 5yr LPR fixing unchanged at 4.85%. That to certain extent suggests PBOC is biased towards slowing the pace of monetary easing amid the emergence of the phase-one trade deal.

In the CNY IRS market, PBOC's bias is being priced. Bear-steepening of the curve, which already started in August, saw the magnitude accelerating after the phase-one trade deal emerged on 11 Oct. At time of writing, the 5-year vs 1-year spread has reached 27bp, the widest level since late-July (chart 2). 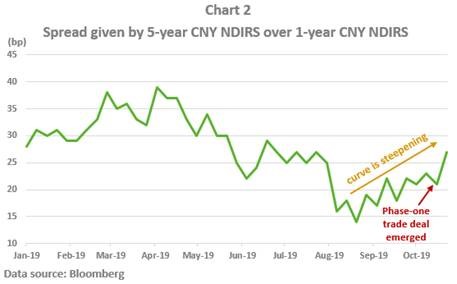 Admittedly, hope is rising for an official signing of the phase-one trade deal in November, but we think it’s still too early to extrapolate a recovery trend down the road. On the contrary, we think growth headwinds will likely persist in the near term. Trade growth will remain suppressed without at least a partial removal of existing US tariffs.

In our view, bear-steepening of the IRS curve could last till Trump and Xi sign the written phase-one trade deal at APEC in mid-November. However, it will unlikely last any longer after APEC because markets sooner or later will know that just a phase-one trade deal is far from enough to stabilize China's economic growth. We expect PBOC will opt for further monetary easing in late-4Q in order to support the growth.

As far as trading strategy is concerned, we are looking to build an IRS curve flattening trade when 5-year vs 1-year spread enters the 35-40bp region.