PBOC on 15 April injected CNY100bn of liquidity into the banking system via the 1-year medium-term lending facility (MLF) at a rate of 2.95%, 20bp lower than the previous operation conducted in mid-March. This move was regarded as a partial rollover of the CNY200bn MLF which fell due on 17 April. On top of this MLF injection, the first batch of 50bp targeted RRR cut also came into effect on the same day, releasing another CNY200bn into the interbank market. Post the withdrawal as a result of the MLF falling due on 17 April, last week saw a net increase in liquidity by CNY100bln.

Doubtless, a 20bp cut in the MLF rate was a bit unexpectedly aggressive. However, a partial rather than total rollover of the CNY200bn MLF falling due on 17 April reflected PBOC's unwillingness to allow the system to be equipped with too much liquidity.

In the interbank market, funding costs have been trending downward further since the 1-year MLF liquidity injection at a lower rate was announced. Year-to-date, the PBOC has cut the 7-day reverse repo rate and MLF rate by 30bp (chart 1). However, in the same period, interbank 7-day repo rate and SHIBOR in the same tenor have fallen by 140bp and 110bp respectively. Given the pressing need for a recovery of the economy which has already been badly hurt by the COVID-19 outbreak, PBOC has been working very hard to bring the funding costs lower. For the sake of the economy, PBOC has to reduce the borrowing costs not only for business entities and individuals, but also for the central government which, in order to support the growth, has already decided to have a substantial increase in infrastructure investment via debt financing. Chart 2 shows just in Q1 government bond and government-guaranteed bond issuances have increased 65% y/y and 246% y/y respectively. 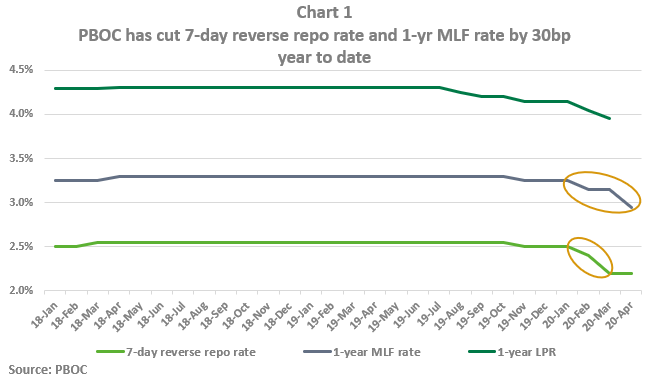 With regards to the yield curve, what we have seen recently is a continued steepening running from 1-year to the very long end (chart 3). In the CGB sector, 1-year and 10-year yields since the beginning of the year have come off by 110bp and 65bp respectively. PBOC's consistent efforts to bring the key financial market interest rates downwards, combined with the expectations of increased supply of long-term government debt as a result of expanding government fiscal spending, continues to attract market participants to move down along the yield curve to the front end. Probably, it is hard for this trend to reverse till the government officially announces the time schedule of the planned special government bond issuance. 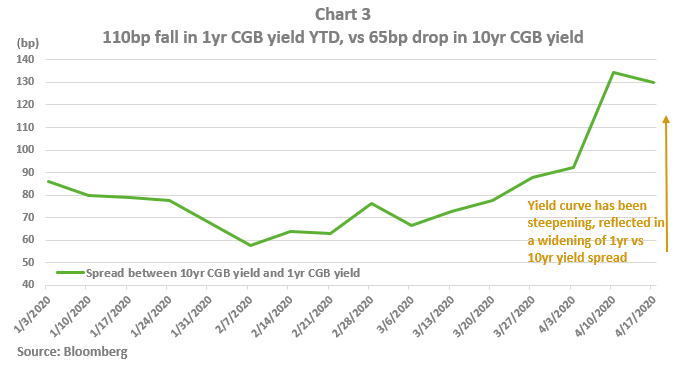