In the Q3 monetary policy report released in the middle of this month, PBOC suggested that the less dovish stance in monetary policy that we have seen since August may continue in the coming months, given the challenging CPI inflation outlook. To avoid public misinterpretation of being "less dovish" as a signal of a shift towards tightening, PBOC on 18 November resumed the 7-day reverse repo to inject liquidity and lowered the reverse repo rate by 5bp to 2.5%, the first reverse repo rate cut in this easing cycle (chart 1). The cut aimed to lower the wholesale funding cost and then to translate into a lower corporate borrowing cost. The magnitude of the cut was small, suggesting PBOC is constrained by the accelerating CPI inflation which reached as high as 3.8% y/y in October. 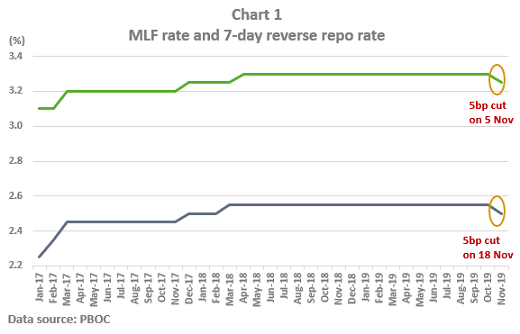 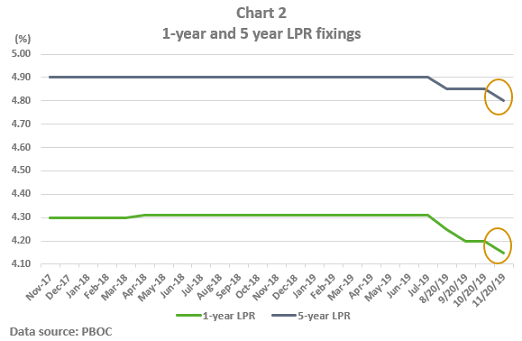 Both medium-term lending facility (MLF) rate and 7-day reverse repo rate were already cut, so we don't expect any further loosening moves at least till the Central Economic Work Conference (CEWC) in December. Now the risks are that policymakers may choose to wait until food price inflation peaks around Lunar New Year in Jan 2020.

In regard to trading strategy, 5-year vs 1-year onshore non-deliverable CNY IRS spread topped out at 32bp (chart 3), shy of the lower end of our targeted entry area 35-40bp before going tighter. The spread, currently at 26bp, may widen out again if CPI inflation pressure accelerates at a much faster pace over the next few months. 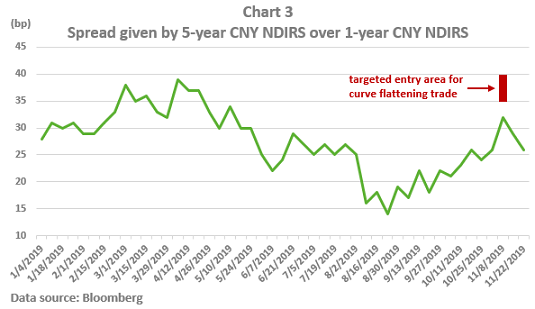