ESG funds soaked up inflows again in March, and the Swiss bond market was the biggest sponge.

Swiss ESG bonds have received positive inflows in each of the last 12 months except one. But this momentum accelerated in February, when the Swiss stock exchange (SIX) launched 20 new ESG bond indices, all based on the Swiss Bond Index. SIX also introduced a filter system allowing investors to search for green, sustainability or sustainability-linked bonds.

As global interest in ethical fixed income soars, SIX is aiming to take a lead in ESG comparability and quantification.

Switzerland has been positioning itself in the ESG bond market for some time, but there is plenty more room for growth. The European Investment Bank listed the first green bond on SIX in 2014. In 2019, Raiffeisen Schweiz - a cooperative of 246 Swiss banks - followed with the first sustainability bond.

Swiss fund managers, companies and cantons are all getting a piece of the action now with launches of funds, and corporate and municipal bonds.

The Swiss government has committed to halving greenhouse gas emissions by 2030. The country’s energy production is nearly carbon-free already. But there is plenty more potential to reduce emissions in sectors such as housing, transport and financial services - green bonds will play a key role.

Furthermore, Switzerland started supporting the Task Force on Climate-related Financial Disclosures (TCFD) in January, and plans to make the recommendations legally binding, alongside laws to prevent greenwashing - labelling funds as more ethical than they are - in 2021.


The biggest challenges to the ethical bond sector have been a lack of standardized definitions and of effective data. Problems like these in the wider ESG investing industry have left the door open for fund managers to greenwash.

SIX has moved quickly to tackle these challenges and tap into burgeoning demand at a time when the EU has just launched a voluntary green bond standard, but is looking to include it in legislation.

Meanwhile, Netherlands, Germany, Italy, Sweden and France now have sovereign green bond funds and the UK and Spain are planning to launch theirs soon. If central banks buy into these funds as part of their stimulus measures, this will support further strong expansion.

And with some sectors, such as car makers and miners, yet to enter the ESG bond market, there is plenty more space for growth and diversification in corporate markets.

New standards and measurements take time to bed in, however. Investors in Swiss-based ESG bonds should take care to understand exactly what they are buying.

As the chart shows, assets in Swiss ESG bond funds jumped from $4.4 billion to $14.3 billion between November and December 2020, despite inflows of only $0.23 billion. 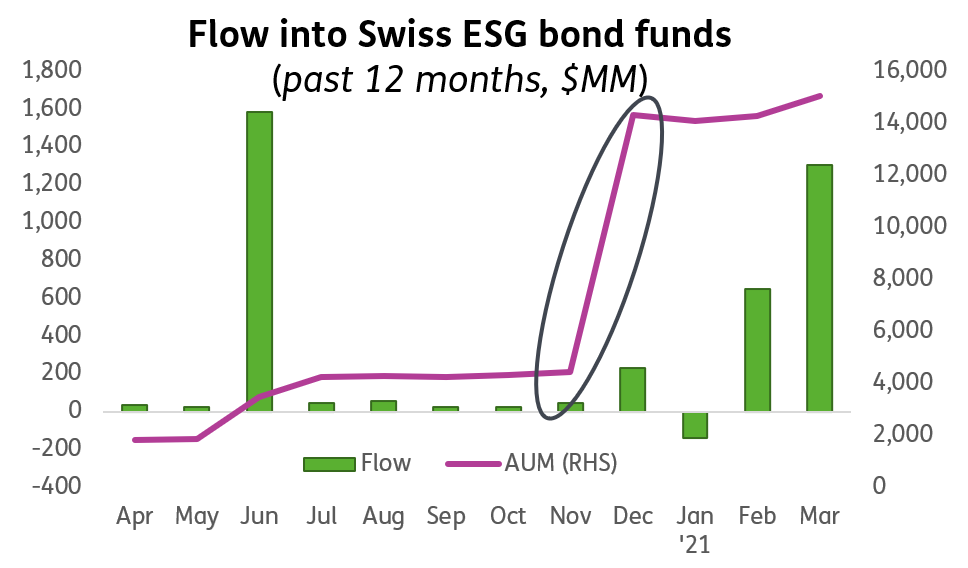 This happened because four funds, worth $9.6 billion between them, declared they were now ESG funds in their December prospectuses.

In the past, fund managers simply re-badging existing funds as ESG without committing fully to the concept has been part of the greenwashing problem. Investors should follow careful due diligence to make sure that hasn’t happened here.