Pace of Green - One fund steals march in Mexican ESG

It’s amazing how much money one fund can gather when it hits a sweet spot. Last month, money poured into the Mexican ESG category, continuing a strong run that started in August last year, according to EPFR data. But all these flows were driven by just one exchange-traded fund (ETF) - iShares ESG MSCI Mexico.

Mexican ESG shares didn’t exist as a category until April 2020. But, as this chart shows, it received inflows in every month since July when the iShares fund launched. It also shows that flows as a percentage of assets under management have been large – as they were in April, August, September, and October. 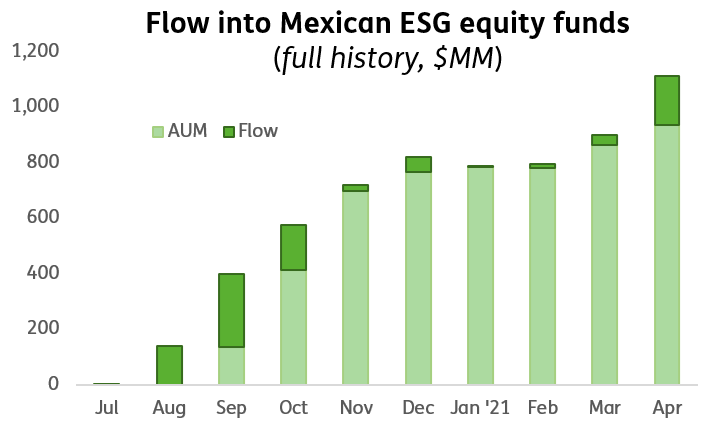 Since July, the iShares fund has quickly become one of the most popular ‘country specific’ ESG funds. It is still the only fund in its category, though it seems likely that other funds will want to join the party soon.

It is easy to understand the fund’s success based purely on performance, as it has returned more than 33% since inception.

Mexican equities had been struggling. But in March last year, flows picked up as a soft Mexican peso and low valuations offered a chance to benefit from any post-Covid recovery.

The emerging market rally has since splintered as fears about inflation worsen and countries such as Brazil and India struggle to tackle Covid. In contrast, Mexico’s Covid cases are falling, and its shares index has continued to surge.

The country has strong ties to the US, so continuing strong growth prospects in America should support its economy, alongside healthier commodity prices. A strengthening service sector has also supported the recovery, suggesting it could maintain impetus as vaccine rollouts continue.

On the downside, the Mexican government has introduced interventionist reforms and refused to increase public spending, denting business confidence and slowing recovery in the first quarter of 2021.

Mexico has become a focal point for sustainable finance since 2019, when it hosted a climate finance meeting for central bank leaders from around the world.

At the time, Eduardo Atehortua, head of Latin America for the UN’s Principles for Responsible Investment (PRI), said Mexico was advanced in sustainable investing but lacked ESG products, though there was appetite for them. Atehortua said Mexico's capital markets were the most dynamic in the region and had attracted several infrastructure projects seeking institutional funding. iShares seemed to be the only fund manager listening.

Since then, Mexico’s interest in ESG has continued to develop with the number of Principles for Responsible Investment signatories growing from eight to 26 in the last two years – including several large banks and pension funds.

Mexican companies have made large improvements on ESG, but still have work to do. According to MSCI, ESG laggards comprise 40% of the country’s market cap — down from 60% five years ago. But this compares to just 16% in Chile, for example, and 6% in the MSCI World.

With investors paying closer attention to ESG ratings, the pressure is on Mexican firms to keep catching up quickly.