Quants Corner - The other side of the FX Allocations coin

The other side of the FX Allocations coin
In our previous Quant’s Corner, Bulls in an FX Shop, we discussed how isolating bullish positions in EPFR’s new FX Allocations dataset can generate excess returns. In this one, we explore what happens when we use the new dataset to drive models created to harness EPFR’s country allocations data.

This work was driven by the need to address a frequently asked question: What does FX Allocations offer that utilizing EPFR’s well established Country Allocations data does not?

In the course of our comparative work we isolated a promising contrarian signal that offers a new way to extract value from existing, Country Allocations-based models.

Apples and Oranges
Country allocations are, by definition, a fund’s allocation to each country. But that allocation does not necessarily translate directly into that country's currency.

Take Chinese technology company Ali Baba. A fund investing in Ali Baba’s N shares would be investing in a Chinese stock, and that would be counted as a China Allocation in EPFR's country allocation database. But the actual investment would be in USD, as the stock is trading on NYSE. Hence, the currency risk of the fund also would be in USD.

Emerging markets hard currency bonds are another case in point. A Brazilian sovereign bond denominated in USD would be counted as a Brazil allocation in EPFR's country allocation database. But the actual positioning and the currency risk would be in USD.

To allow clients to discriminate between country allocations and the actual FX allocations of funds, EPFR now gathers the net FX allocation information of funds. The resulting database, FX Allocations, tracks the allocations since 2015 of over 1,800 funds managing assets totalling $2.8 trillion to more than 90 currencies. The data is adjusted to factor out hedging activity. 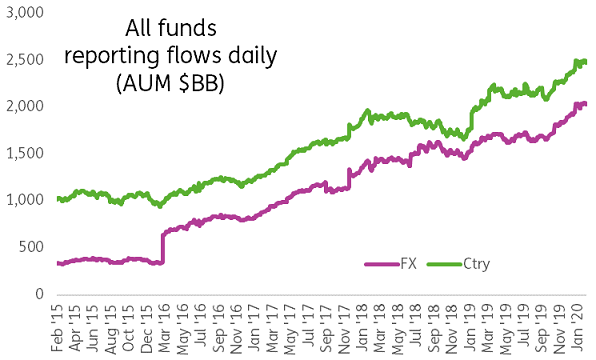 For the purposes of our research, we decided to progressively deform the current country allocations-based FX-flows predictor, step-by-step, until we arrived at a FX-flow predictor based on FX allocations.

The case for the status quo

To make this shift, we tested four permutations of the data that can be gleaned from both datasets. These were:

The table below shows performance for ACWI currencies using these four approaches. One-day flow percentage has, in each case, been subset to the period between 1Q15 and 1Q20. This ensures that four are based on full coverage and are tested over precisely the same period.

As you can see from the table below, when you reduce the country allocations dataset to only those funds also reporting FX allocations, the performance of the predictor gets weaker.

Throwing everything at the problem

Faced with these results, we looked for some new approaches. As noted, the earlier analysis focus on cross-border funds only. What happens when we run a similar analysis, but this time use the full FX allocations database?

The results, as can be seen below is weaker for ACWI and G10 spaces compared to our country allocations-based model. But, significantly, the signal for EM is a solid contrarian one (see table below).

To dig deeper into why and how the full FX allocation dataset generates a strong contrarian signal, we next ran a similar analysis using the following four predictors:

The results, as can be seen below, clearly show the added value of the FX Allocation database in generating contrarian signals for EM.

One potential explanation for this contrarian strategy may be that, within EM, currencies paying higher interest rates have been receiving less flows. We would expect the opposite – higher interest rate paying currencies should receive higher flows – and this may be capturing a short-term signal that will revert over time.

One hint of this is that, over time, Q5’s overshoot, and the contrarian signal that drives, is significant in frequencies up to one month but then disappears. 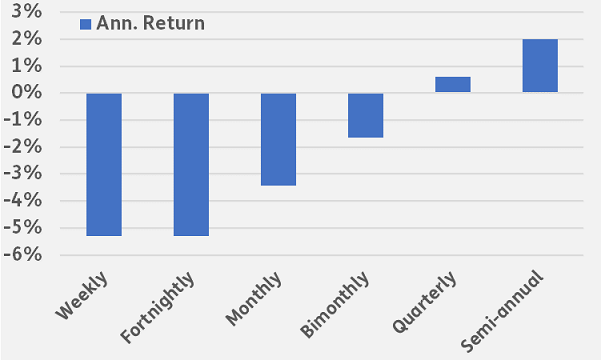