In the small hours of January 3, the United States carried out a drone strike on a convoy traveling near Baghdad International Airport. Among the seven people killed instantly was Major General Qasem Soleimani, commander of the Quds Force of the Islamic Revolutionary Guards of Iran. Days later, missiles fired from Iran hit the U.S. Al Asad airbase in Iraq and a civilian aircraft taking off from Tehran was mistaken for a US intruder and engaged by local air defenses, going down in flames with 100% casualties.

Geopolitical events such as this have a long history of jolting energy markets. But, with the buffer created over the past decade by US shale oil production muting the classic correlation between events and markets, it requires new quantitative tools to capture the full range of market signals.

A tool that we have developed in recent months is a fund-level oil sensitivity factor (OSF), one of many which can be constructed from the EPFR data.

To build the OSF, we regress the return of each equity fund reporting data weekly to EPFR against the returns for the S&P 500 and spot Brent Crude. This regression is run over the prior 52 weeks. The coefficient on Brent Crude is the oil sensitivity of the fund. We then divide up these funds into three buckets, based on oil sensitivity, and measure flows into the top and bottom buckets.

The chart below shows flow into the most and least highly sensitive buckets over the latest eight weeks. 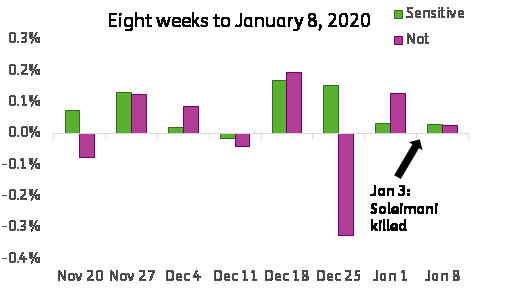 Despite heavy flow into oil-sensitive funds the week ending on Christmas, market reactions were relatively muted after the drone strike on Soleimani. This may have to do with the feeling that neither the Iranian government nor the Trump administration can afford, for political and economic reasons, an all-out war.

This reaction is in marked contrast to the one seen when Iranian drones struck the Abqaiq refinery in Saudi Arabia during 3Q19. Below is a similar chart showing flows into oil-sensitivity buckets for the eight weeks to 9th October. 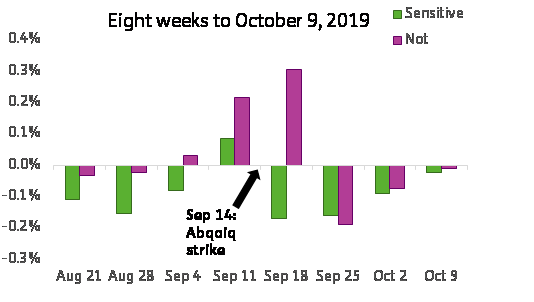 Although market reactions to unexpected events in the Persian Gulf are now less Pavlovian thanks to the rise of alternative sources of oil, the shift towards ‘green’ energy sources and a degree of geopolitical fatigue, we now have another tool to measure how investors are contemporaneously reacting to those events.

Oil sensitivity is just one example of the new stable of quantitative factors that can help our clients quickly and accurately extract relevant signals from fund flow data.

Today, the oil infrastructure of Saudi Arabia, UAE and Iraq remain highly vulnerable to attack by Iran or one of its many proxies. To find out more about EPFR OSF, or EPFR in general, please contact us at sales.financial@informa.com