The NPC meeting officially kicked off in Beijing (22 May). There, Premier Li Keqiang announced:

Unsurprisingly, Premier Li did not set any GDP growth target for 2020 amid the uncertainty in the aftermath of the COVID-19 crisis.

Given the issuance size of upcoming CGSBs being far smaller than the market consensus of CNY2,000bn, the initial reaction of the secondary market was quite positive. We saw a 3bp drop in the CGB 10-year yield in secondary trading right after the announcement was made. Despite lack of details about the timing of the upcoming issuance, market participants in general believe the supply won't come till August, just like previously in 2007.

Before this year, the central government has issued special bonds three times. The first issuance, involving 30-year paper, was in 1998, which aimed to boost bank capital post the Asian Financial Crisis. The issuance was targeted at four national banks, funded mainly by liquidity released from a RRR cut. The CNY270bn proceeds were then injected into the four national banks to boost their capital. The operation resulted in a composition change on the liability side of PBoC's balance Sheet. The second issuance was in 2007, under the backdrop of rapid expansion of FX reserves. The total CNY1.55tn raised was used to purchase equivalent FX from PBOC to set up China Investment Company, involving 10- and 15-year papers. Out of the total amount, CNY1.35tn was directly sold to Agricultural Bank of China, which then re-sold the bonds to PBOC. The remaining CNY200bn of papers were sold to investors via auctions, which was small enough to cause only very brief liquidity turbulence. The third issuance was in 2017, merely a roll-over of the maturing part of the 2007 special CGB.

Liquidity is one of the key factors that the central government will consider in setting the time schedule of a supply of as much as CNY1,000bn worth of bonds. Due to the seasonality, liquidity usually tends to be a bit tight in June and July, followed by moderate easing in August (chart 1).

Assuming 2007's issuance pattern repeats itself (chart 2), the supply will be broken into 7-8 tranches with the first one being the largest in size. 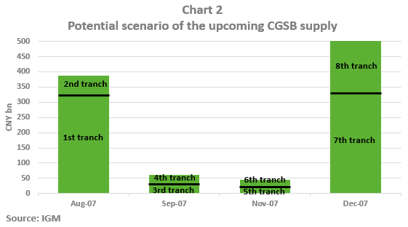