09 Jun 2020 by Natalie Rivett
Topics: Industry News |
Provided by IGM FX and Rates |
Get a free demo
Login to IGM

MXN rallied most of all EMs in May, as investors reverted to hunt for yield

Investors' attitudes to Emerging Markets and wider risk assets have improved in recent weeks as they look beyond lockdown restrictions and weak economic data and revert to a hunt for yield, amid lower volatility.

The Mexican Peso was the biggest beneficiary of this hunt for yield among EM currencies in May and recorded its best month in more than 25 years, as USD/MXN shed 9%, 3ppts more than the next greatest losses recorded in USD/RUB.

Lower nominal and real interest rates has been the general trend for 2020 so far as central banks have stepped in to try and shore up their economies in the face of the coronavirus crisis, but thanks to a relatively modest 175bp of cuts from Banxico ytd, together with a drop in inflation in recent months, the MXN still compares favourably on a carry basis. 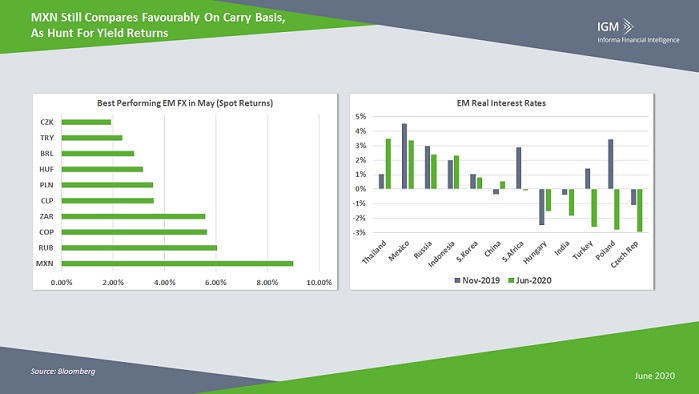 Carry gains are typically eroded by high volatility, which notably diminished the Peso's appeal in February and March and contributed to a 20% slump (vs the Dollar) in the first quarter, exceeded only by a handful of other EMs - the RUB, ZAR and BRL.

As illustrated in the below dashboard, one-month implied volatility for the Peso has fallen by more than half in the past two months, back to levels last seen in early March, reaching almost 17% and breaching the 100-dma for the first time since February in the process, Still, the currency's expected swings are well above historic norms (started the year near 6% and was as low as almost 3% in early 2008) and this has prompted some caution from analysts that volatility-adjusted carry returns, while higher than the March bottom, remain below levels before the pandemic.

MXN expected to remain supported by its yield-advantage

Having clawed back a large chunk of the March losses, the Mexican Peso is now at a crucial juncture - and this is in fact true for most EM FX. Whilst oversold conditions suggested a bounce was justified after the broad sell-off in March, it may be harder for the Peso and EM FX in general to sustain advances (or rather for USD/EMs to sustain the downside) given the vulnerable economic backdrop, unless there are fresh risk-on impulses, such as upside surprises to global economic data and improvements in Covid-19 figures in the hot-spots.

Working in its favour, the Peso does ultimately have a yield advantage, as we have already highlighted, and this should continue to offer support to the Mexican currency as concerns over the path of inflation ensure the central bank continues to proceed cautiously with rate cuts, to avoid threatening financial stability.

In its latest quarterly inflation report, released in late May, Banxico sees CPI running above the 3% target at 3.5% in Q4 and accelerating to 4% by mid-2021, before slowing back to 3% by the end of 2021. In line with market pricing, economists in the latest Citibanamex survey forecast the benchmark rate to end the year 100bp lower at 4.50%.

...But domestic risks remain and may threaten sustained gains

However, carry appeal will not be the sole determinant of the MXN's fortunes. Domestic risks remain as well. Like many of the world's economies, Mexico has been hit hard by the dual challenges of the coronavirus pandemic and low global commodity prices, but with President AMLO steadfastly ignoring calls for stimulus, Mexican GDP forecasts for 2020 are some of the most bearish we have seen among Emerging Markets.

According to the country's central bank, the economy could contract as much as 8.8% this year, which would be the worst performance since a 16% slump in 1932. Even in the best-case scenario, the economy will still shrink 4.6%, the most in over a decade. Signals from the data that the slump will not be as deep as feared would thus, be important for Peso gains beyond the near-term. Depending on the shape of the rebound and whether it is a so-called V-shaped or a U-shaped recovery, Banxico expects GDP in 2021 to range from -0.5% to +4.1%.

Furthermore, the oil price collapse and lower taxes will likely push Mexico's debt higher, despite tight fiscal policy. As of 2019, Mexico's fiscal budget deficit improved to 1.6% of GDP from a year earlier, the narrowest since 2017, but analysts surveyed by Bloomberg look for the deficit to jump to the 4.3% of GDP by the end of this year, the widest since at least 1995.

The slide in oil prices has already forced Moody's to cut Pemex to junk; the state owned oil company is one of the reasons for the dim sovereign outlook held by rating agencies that could lead to further downgrades for Mexico in a scenario where debt continues to rise and the fiscal deficit widens further – thus, posing a threat to capital flows and the Peso. S&P already has a negative outlook on the sovereign rating.

This could explain why investors are the least bullish on the MXN in 3-years. Per CFTC data on IMM positioning, outright long MXN positions have plummeted from near record highs above 230k at the end of 2019 to below the 50k mark, last seen in early 2017. Whilst these positions have picked up from their March lows, outright short positions have also risen and at a greater pace of late to prompt two weeks of marginal net short positioning last month (first net shorts since late 2018) - see below dashboard.

Additionally, since March, ytd foreign holdings of Peso-denominated debt have been net negative and have consistently deteriorated on a weekly basis, to -USD12.1bn in the third week of May, the most negative since 2016, according to data from the central bank. According to EPFR data, net cumulative inflows for Mexico focused bond funds, meanwhile, look to have entered a phase of moderation since February, but this is in keeping with the wider EM trend - see below dashboard. 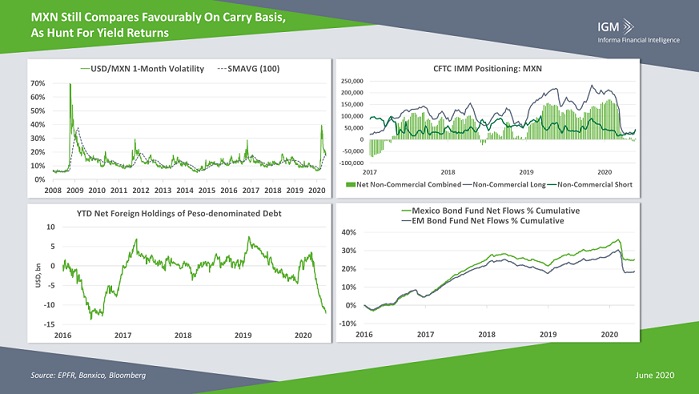 As previously outlined, we expect the Peso's strong carry and low volatility to continue supporting the currency, as long as global optimism holds out, but for gains to be sustained much will depend on local risks, as much as global factors. The economic outlook has grown increasingly bleak for Mexico, but this does create scope for some upside surprise. 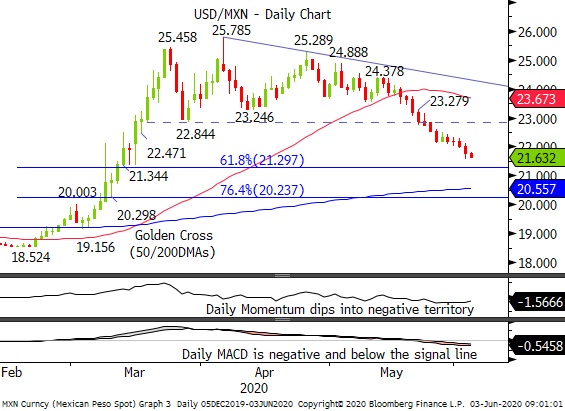