Quants Corner - Money Market Fund flows: Fear is not their only signal

Money Market Fund flows: Fear is not their only signal

With the impact of the COVID-19 virus on day-to-day life and the global economy growing by leaps and bounds, fund flows are reflecting the biggest flight to safety by investors since the financial crisis in 2007-08.

Nowhere is this clearer than in the latest data for US Money Market Funds. Buoyed in 2018 by the accelerating pace of US interest rate hikes and in 2019 by the Sino-US trade tensions, already robust flows have gone into overdrive during 1Q20. Between March 3-19 these funds absorbed over $320 billion – more than half of last year’s record-setting total (see Figure 1 below). 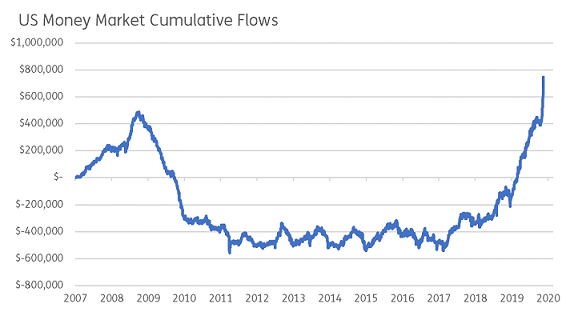 That this highly liquid fund group attracts strong flows during times of stress, and hence can help investors gauge levels of fear, is well known. But quantitative analysis of those flows can generate some less well known, and arguably more actionable signals.

Banking on the ‘strong getting stronger’

While US Money Market Funds can usually count on an influx of fresh cash when the investment climate turns colder, the same is not true for Money Market Fund groups in other major markets such as Japan, the Eurozone and UK.

Take, for example, the flows for UK Money Market Funds during and after the Brexit referendum in mid-2016. Given the magnitude of the shock at the result, it would be logical to expect a surge in inflows into this fund group. But in this case, the opposite happened (See Figure 2).

Figure-2: 20-day flows to UK Money Market Funds during and after the ‘Brexit’ vote

Instead of increasing their allocation to UK Money Market Funds, investors moved their money out of that group while boosting flows to US Money Market Funds (See Figure 3). What happened back in 2016 is happening again now, with the magnitude of the move to US funds similar to the post-Brexit vote spike.

Figure-3: Spread between 20-day flow % to US MM Funds vs UK MM Funds

Although interest rate differentials and differences in the regulatory environment may explain some of the tilt towards US funds, we suspect the main reason is the difference between the performance of the respective currencies.

In their scramble for safe haven assets, investors have bid up the US dollar, and the recent dollar strength across the board has made US Money Market funds more attractive. As Figure 4 below illustrates, all Euro, GBP, or Japanese yen-denominated Money Market Funds have seen outflows over the past month, while the US dollar-denominated money funds have received substantial inflows. 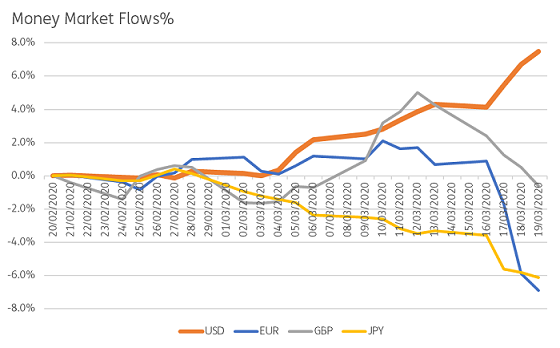 Profiting from this FX signal

To explore this relationship between money market funds and currency performances, and test its historical evolution, we run a simple analysis utilizing the flow-based indicator created by Srimurthy et al.[1].

The results are reported in Figure 5. The Sharpe ratio is 0.43, with an annualized return compared to an equally weighted benchmark of 3.6%.