China Insight: Messages From NPC Are Less Dovish Than Expected

The NPC ended on Thursday (28 May). In the post-NPC press conference, Premier Li Keqiang gave a couple of remarks:

Overall, Premier Li's remarks reflect central government's intention to avoid being too dovish in the aftermath of COVID-19.

In our view, sustained inflation pressure is one of the constraints keeping central government from pursuing very strong stimulus.

Another constraint is the leverage. We expect the increase in leverage this year will be a different kind of credit boom to the post the 2008 global financial crisis period. Data suggests that corporate debt peaked at 140% of GDP at end-2016, and fell to 123% at end-2019 (chart 1). For 2020, we expect the increase in leverage to be mainly driven by the public sector, a continuation of the trend we have been seeing over the past few years. In aggregate, we expect total non-financial debt to rise by 13.5% in 2020, compared with around 10% last year, and non-financial debt/GDP ratio to rise to about 290% by the end of 2020 from 264% at the end of 2019. 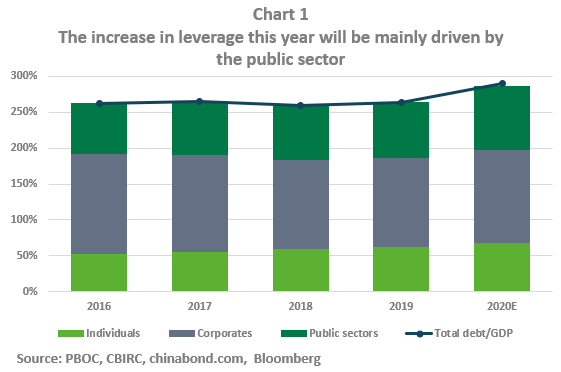 The China bond market was quite disappointed by the messages released from the NPC. Both interbank repo rates and CGB yields (chart 2 and chart 3) were going upward while the NPC was underway. 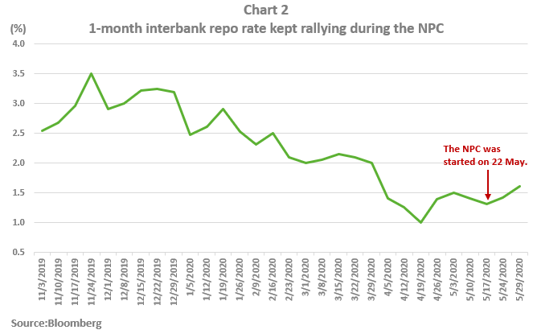 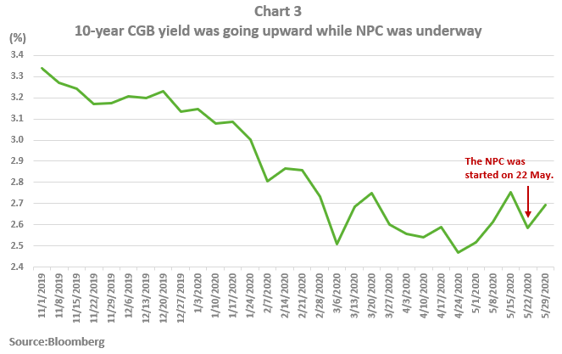 Be mindful that liquidity was usually tight in June. If this seasonality repeats again this year, we will likely see more upticks in bond yields over the next 3-4 weeks.