PBOC cut the 1-year mid-term lending facility (MLF) rate by 5bp to 3.25% on 5 November (chart 1) while rolling over the matured MLF refinancing. The cut will likely drive down the loan prime rate (LPR) further, which was left unchanged at 4.20% and will be repriced on 20 November (chart 2). As the first cut in the MLF rate in this easing cycle, it suggests PBOC is faced with growing risk of further economic slowdown. However, the magnitude of the cut is small, reflecting the degree of monetary easing is constrained by growing CPI inflation. 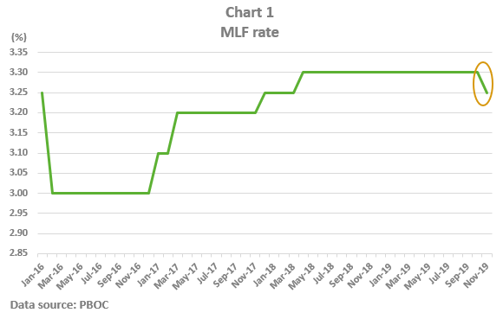 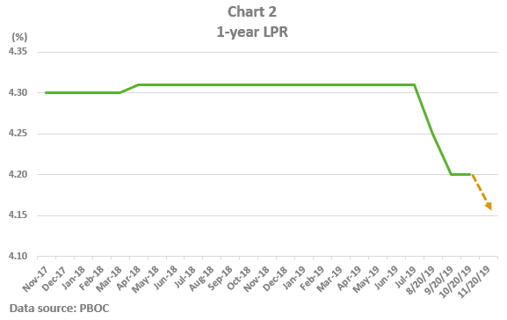 Take a look at the pace of CGB bond yield rise, we should know this MLF cut made a lot of sense. Since the beginning of September, CGB yields has kept rising. 10-year yield reached as high as 3.34% in late-October, up as much as 34bp from September's lowest level (chart 3). As the government is adopting fiscal easing in an effort to support economic growth, so more borrowing is needed. Over CNY1tn of bonds will be issued over the next two months as per the schedule, a failure to curb the upside of bond yields will increase the financial burden for the government. 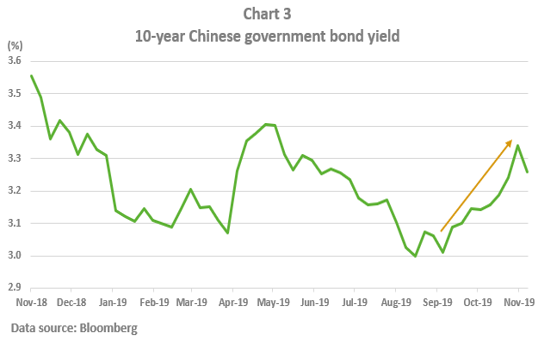 The slight cut in the MLF rate may alleviate the upside pressure on bond yields in the short run. But its impact should be quite limited as the market has yet to price in a potential acceleration of CPI inflation.

As far as trading strategy is concerned, we are still looking to build IRS flattening trade when 5-year vs 1-year spread enters 35-40bp region (chart 4). 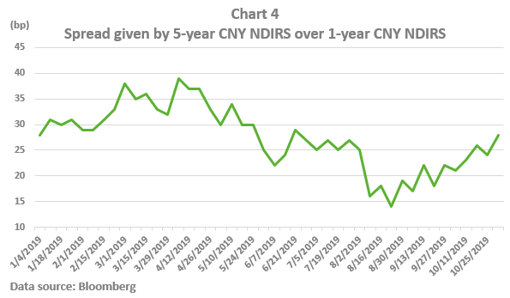 We reiterate our view that bear-curve steepening could last till Trump and Xi sign the written phase-one trade deal, and that it however will unlikely last any longer after that because markets sooner or later will know that just a phase-one trade deal is far from enough to stabilize China's economic growth unless a more aggressive monetary easing is adopted.