PBOC conducted a CNY700bn 1-year Medium-Term Lending Facility (MLF) on 17th August, which more than offset CNY550bn which matured on 15th. Despite that, combined with the subsequent liquidity injections via OMO reverse repo, we did not see any easing in interbank liquidity. Instead, funding pressure kept picking up, resulting in a rise in the 7-day interbank repo to nearly 2.30% (chart 1). 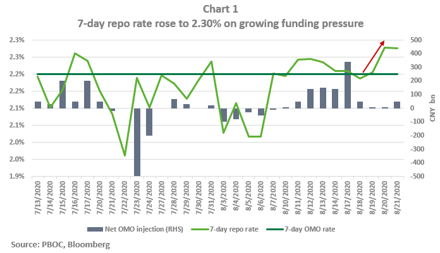 We attribute the growing funding pressure to the unfavorable bond supply picture. During the first two weeks of August, supply of local government bonds (LGBs) issuance accelerated notably. Of CNY612bn of the LGBs issued, only 25.5% (i.e. CNY156bn) was for refinancing purposes. In other words, net supply on top of that for refinancing purposes was as large as CNY456bn.

Total net issuance of China government bonds (CGBs), local government bonds (LGBs) and policy bank bonds (PBBs) for this month (August) is estimated to be as large as CNY1.37tn, the second-highest level this year following the record issuance in May (chart 2). After that, we will likely see a gradual decrease in supply over the rest of the year. However, with PBOC turning increasingly reluctant to ease monetary policy further, we doubt the bond market will re-enter a bull trend any time soon. Instead, we anticipate CGB 10-year yield will be heading upward to retest the 3.10% level (chart 3). 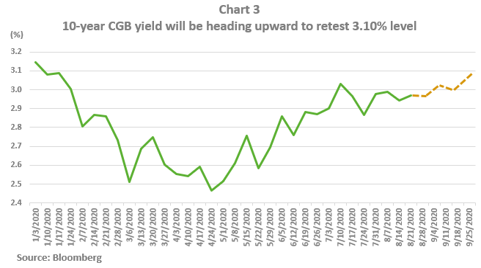