China Insight: Is a SARS Repeat on The Way?

According to the report of the Wuhan Municipal Health Commission, as of Beijing morning 22 Jan 2020, there are more than 400 confirmed cases of the Wuhan coronavirus nationwide. Meanwhile, Taiwan, Korea, Thailand, Japan and the United States also reported confirmed cases of the virus. There are growing fears that an outbreak of the virus will happen across Asia very soon, just like SARS in 2003.

Looking at the Wuhan coronavirus outbreak, we find it necessary to draw on some experiences from SARS in 2003 in terms of the possible impact on the China/HK markets in coming months. After all, the genetic sequence of the Wuhan coronavirus is 80% similar to the SARS virus found in bats, civets and humans (as per K.Y. Yuen, the Chair of Infectious Diseases of the University of Hong Kong's Department of Microbiology) and the two syndromes also look very close in terms of the timing of outbreak.

The Wuhan coronavirus outbreak is getting worse with more suspected and confirmed cases reported. More importantly, with the mass movement of population for Lunar New Year (LNY) getting underway we inevitably will see a sharp acceleration of transmission over the next 2-3 weeks. As such, we won't be surprised if the number of confirmed cases is already in 4-digit territory by the end of LNY holiday in mainland China.

With reference to the pace of growth in the confirmed cases, many experts believe the Wuhan coronavirus now is still in the initial stage of the outbreak. Assuming it develops in a similar manner as SARS did in 2003 (chart 1), we probably will not see the peak of the number of new cases until March or April. 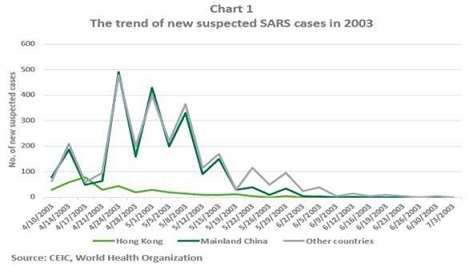 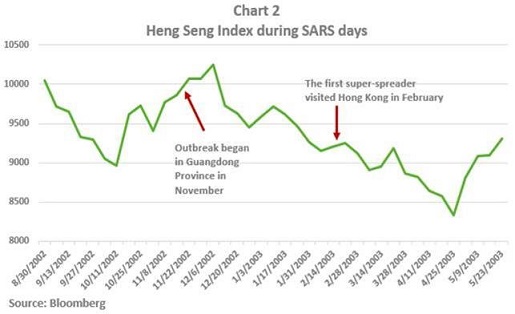 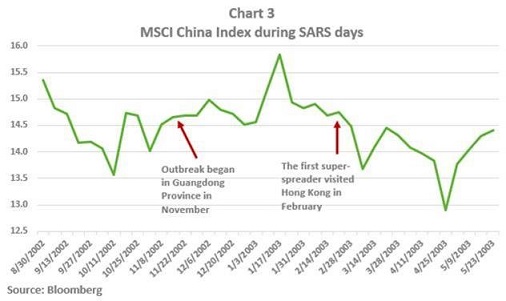 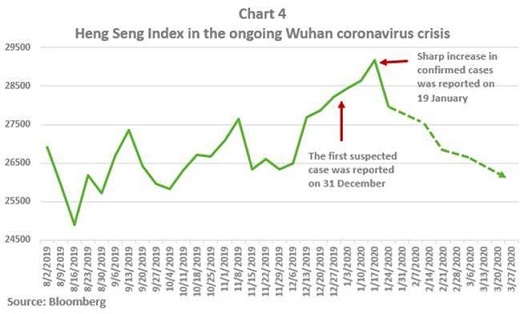 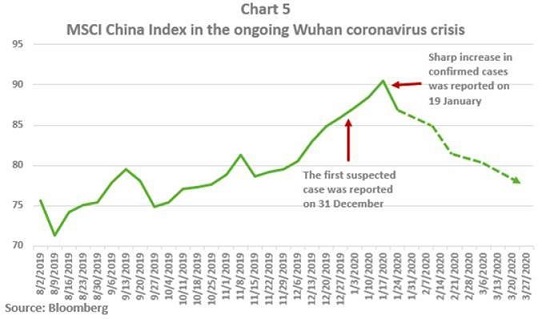 With regards to the FX rate, it does not make sense for us to make reference to how onshore USD/RMB spot rate performed during the SARS days because the pair was locked in an 8.2760-8.2780 range (as narrow as 20 pips !!) for as long as three years till the government-managed currency revaluation started in the summer of 2005. Given a completely different FX regime being in place, RMB FX now definitely is far more market-driven than 17 years ago. In our view, offshore USD/CNH will continue heading upward, following a big jump on 21 January. An upside breach of December's month-low 6.9229 will likely prompt an extension of the rally to 6.9663 (the 50% retracement target of 7.0870-6.8457 decline during 3 Dec to 20 Jan).