Viewpoint: RBI intervention here to stay but INR FX may do better in Q1 2021

30 Nov 2020 by Jonathan Cavenagh
Topics: Industry News |
Provided by IGM FX and Rates |
Get a free demo
Login to IGM

Viewpoint: RBI intervention here to stay but INR FX may do better in Q1 2021

INR has been an underperformer within the EM Asia FX space during 2020, see the first chart below. The FX is down 3.5% against the USD year to date, with IDR the next worse at -2% YTD. 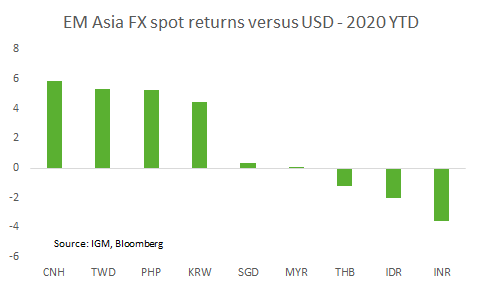 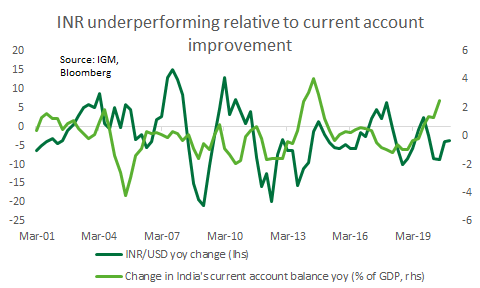 It's also difficult to make the case that capital outflow pressures have offset the improvement in the current account balance. To be sure, portfolio inflows have not been a source of support for INR for much of 2020. However, this has been more than offset by the continued upward trend in net FDI inflows, see the chart below. In this sense, it's difficult not to come away with the impression that India's overall balance of payments position has been very resilient through the course of 2020. 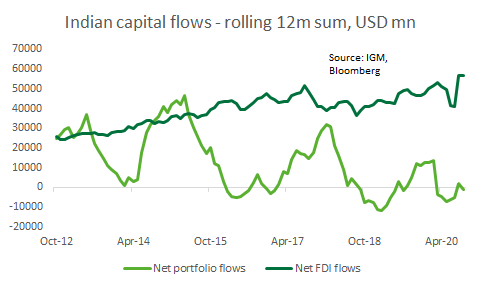 Our short-term fair value model for USD/INR also paints a supportive picture for the rupee. The chart below plots spot USD/INR against the fair value metric, which reflects relative equity market performance between India and major developed markets, the US 10yr yield and commodity prices (which serve as a proxy for global growth expectations). At the moment, the fair value suggests USD/INR spot should be in the low 71.00 region versus the current 73.90. This represents close to a 4% differential. 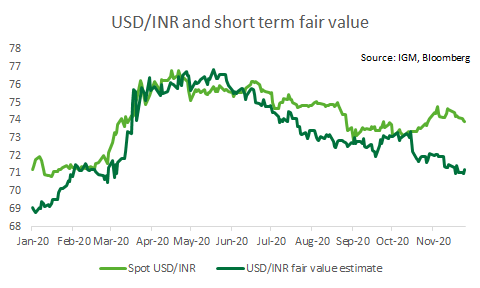 The big discrepancy between India's balance of payments health and INR FX performance reflects RBI's strong intervention stance. The chart below plots RBI's net FX purchases, on a rolling 12-month sum basis, with the trend clearly surging higher over the past 12 months.

Chart 5: RBI FX intervention has surged in the past 12 months 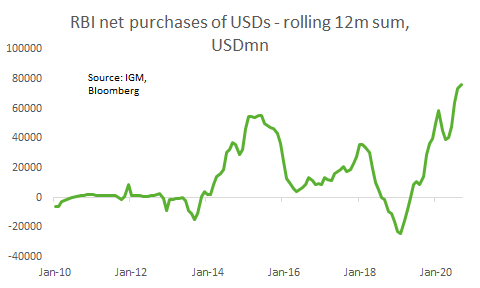 Firstly, Indian inflation generally runs ahead of the pace seen in the rest of the world. This is arguably not that surprising, as inflation in an emerging market economy will generally be running stronger than that in other major developed economies. However, as the chart below illustrates this divergence has widened substantially in the past 12 months. The flow on effect from this is that it makes your exchange rate more expensive, as the price of your goods is rising more quickly, on average, than the rest of the world's. This is seen when we look at India's real effective exchange rate, which adjusts for both relative exchange rate and inflation moves between India and its major trading partners, see chart 7 below. So even with INR's underperformance in the nominal space, as outlined in Chart 1, its stronger inflation rate compared to the rest of the world, has keep its REER very high.

Chart 6: India inflation running well ahead of the rest of the world 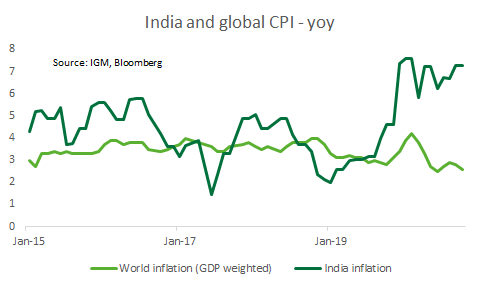 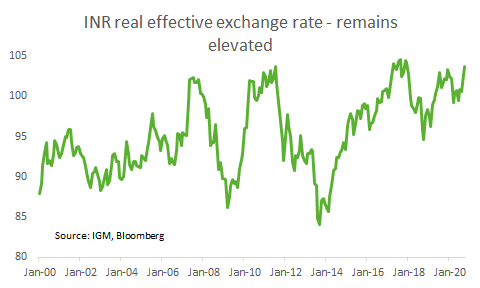 An expensive exchange rate will dampen export competitiveness, all else equal. There is no doubt the Indian authorities are looking to boost export competitiveness and aid economic growth as a medium-term policy goal. This, in turn, would reduce India's trade deficit and shift away from persistent current account deficits. In the goods sector, India's share of global exports has stagnated in recent years, with a high exchange rate not helping this process.

One country with which India's trade balance has deteriorated noticeably over the past decade has been China. The chart below plots the 12-month rolling sum of the trade balance between the two economies. This is likely to have been another focus point for the authorities in looking to reduce the structural trade deficit. The last few years has seen some improvement, with the deficit moving to -$40bn from -$60bn, but no doubt the authorities would like to see further improvement in coming years. INR FX has underperformed CNH this year by a decent margin (see Chart 1 above), so in a nominal sense competitiveness has improved but India's inflation rate is still well above China's.

Chart 8: India's trade deficit with China has ballooned in the past decade but some signs of improvement 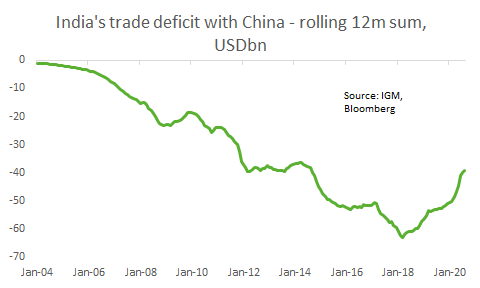 Our estimates suggest RBI intervention remained strong in October and through the first half of November, as headline FX reserves rose $18.7bn and FX valuation affects didn't appear to be that large. In November to date FX reserves are up close to $13bn and while the USD has been weaker, thereby boosting headline FX reserves, it's unlikely this accounts for all of the rise in reserves.

The structural factors outlined above, particularly around export competitiveness and trying to boost exports as a share of Indian GDP, will continue to play out over the medium to longer term. This suggests RBI FX intervention will remain a key part of the INR FX landscape for the foreseeable future.

Of course, the pace of intervention may not remain as strong as what it has been, which could open a window for INR FX appreciation, against what is still expected to be a supported balance of payments backdrop into the early parts of 2021.

We noted above that structurally higher inflation in India compared to its major trading partners will drive intervention from a competitiveness standpoint. It's important to note though that to some extent this is a double edge sword. A weaker INR FX rate will also drive import costs higher, all else equal. This is something the authorities may be more mindful in the current context, as domestic inflation pressures are very elevated, as chart 6 above illustrated.

At the moment higher domestic inflation is mainly reflective of higher food costs. The Indian government expects food costs to come down as supply conditions improve and on the arrival of new crops (see this link for more details). Upstream or wholesale price pressures may trend higher, particularly if the global economy continues to improve in 2021. Chart 9 below overlays a commodity price index against the yoy change in Indian wholesale prices. 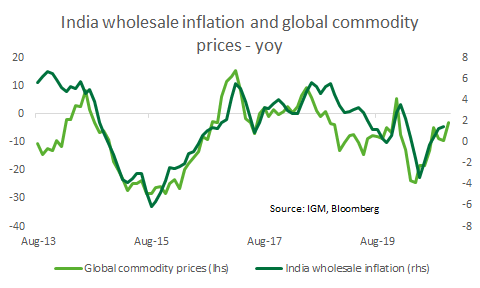 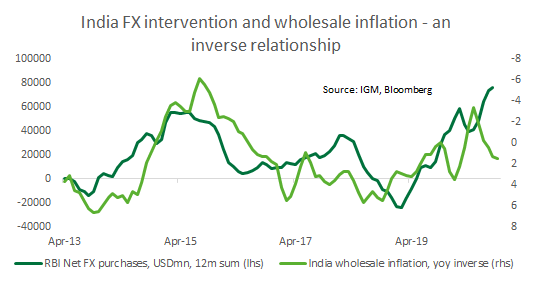 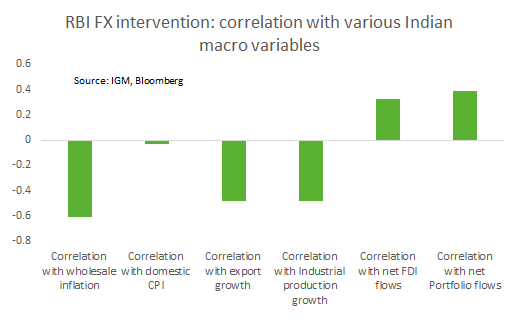 The modest pickup in wholesale inflation is already pointing to some easing in the pace of FX intervention. If the global inflation pulse recovers further into 2021, via higher commodity prices, this may prompt some moderation in FX intervention and acceptance of a stronger INR FX rate from the central bank. Likewise in terms of an improvement in export and Industrial production growth – to date Indian export growth has lagged the improvement seen elsewhere in the region Some catch up in 2021 could at least see the central bank temper its intervention pace and create a window for the FX to catch up with the firmer EM Asia trend.

Any softening in the domestic inflation trend is also likely to be seen as INR positive. It will improve the real yield backdrop, which is currently negative. Any shift back to positive real yields should encourage fresh inflows into local bonds from offshore investors. It will also allow greater scope for the RBI to ease policy further, which has typically been a positive for local equities. The RBI may also be less concerned about REER appreciation in an environment of lower headline inflation in the domestic economy.

The first few months of the year tend to be positive from a seasonal standpoint for INR FX, see the final chart below. This is likely to reflect that the current account deficit is typically lower during this period in the lead up to India's fiscal year end. Our bias would be to look for INR FX to play some catch up through Q1 of next year and spikes in USD/INR between now and the end of the year should be viewed as selling opportunities in our view.

Chart 12: INR FX seasonals tend to be positive in the first few months of the year 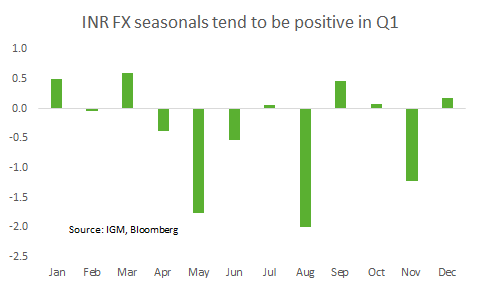