27 Oct 2020 by Natalie Rivett
Topics: Industry News |
Provided by IGM FX and Rates |
Get a free demo
Login to IGM

USD/TRY has breached the 8 handle for the first time ever.

It was only a matter of time though, with CBRT last week giving the green light to bulls by refusing to hike the benchmark rate again.

Instead the central bank chose to lift the late liquidity rate, creating more room to raise the effective cost of borrowing without resorting to outright tightening, which has created policy confusion and further weighed on central bank credibility, a key driver of the long running deterioration in sentiment towards the Lira.

USD/TRY has advanced for the past nine weeks, the longest upside run since 1999, and looks to have firmly cemented its position as the best performing USD/EM pair in H2, up more than 15% at the time of writing.

YTD, the pair has now advanced almost 27%, catching up USD/BRL as the greatest outperformer of all USD/EMs (+28%)

It is not just the Lira that has suffered, with Turkish equities and debt both seeing increased outflows from foreign investors this year, though with some moderation in recent months, after hitting fresh record and multi-year lows respectively, according to data recorded by the central bank, as can be seen in the dashboard (Turkey Foreign Investment, 12-Mth Rolling Sum). EPFR tracked flows, meanwhile, have revealed a sharp deterioration in Turkey bond fund flows over the course of the year and with net outflows stabilising in recent weeks around 17% of AUM, as can also be seen in the dashboard. 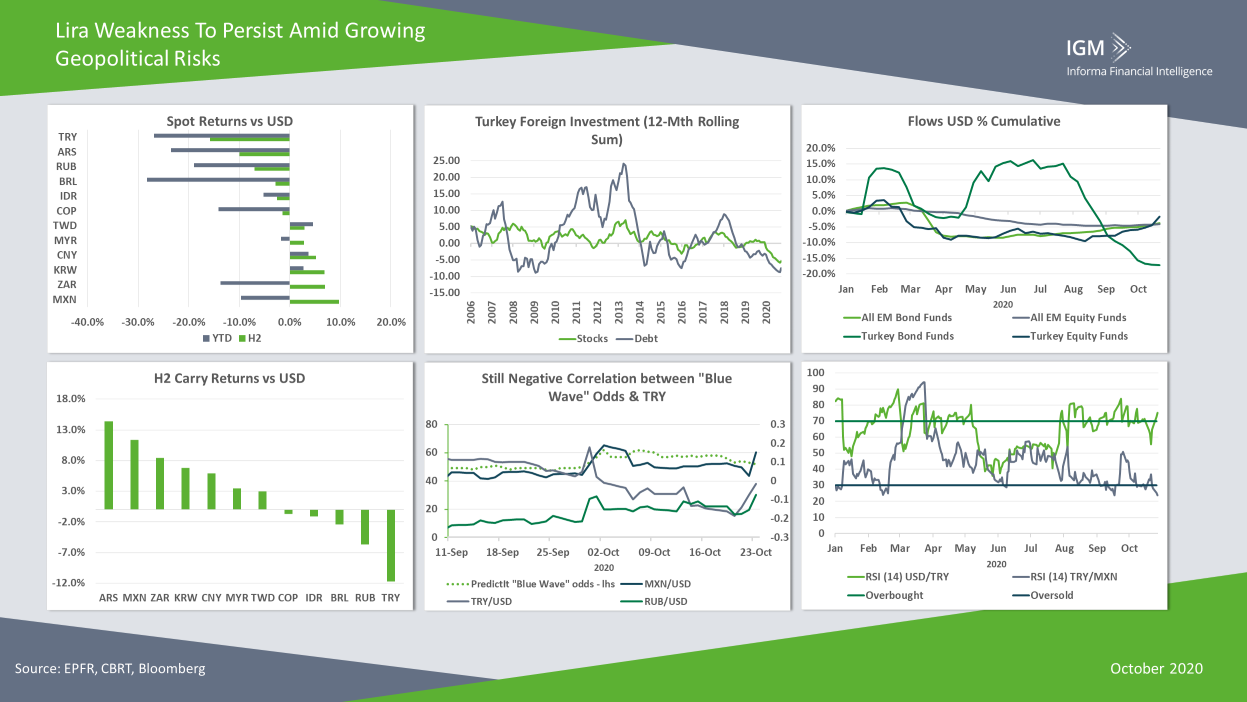 Geopolitical tensions add to investor concerns as US election looms

Sentiment towards the Lira and Turkish assets is being additionally sapped by a string of geopolitical risks, as President Erdogan's actions/strategies have only served to antagonise his traditional allies, trade partners and neighbours.

President Erdogan's government faces possible US sanctions over the purchase of the S-400 missile defense system from Russia, which Washington says compromise NATO defenses, and has been threatened by sanctions from the EU, over "provocations and pressures" in a row with Greece over energy resources and maritime borders. Erdogan also re-opened his conflict with French President Macron over the weekend, calling for him once again to see psychiatric help over his treatment of Muslims, which was expanded to include all of Europe, thus increasing tensions with the EU.

With regards to the US election, much like Russia, Turkey stands to lose more than most other countries in the event of an anticipated Biden victory/"Blue wave" on 3 November. This is reflected in a negative correlation between the odds the Democrats will win the presidency and both chambers of Congress, and the TRY and RUB (vs the USD), as can be seen in the dashboard.

Such outcomes increase the risk the White House finally pulls the trigger on long-threatened penalties under the Countering America's Adversaries Through Sanctions Act (CAATSA), that is meant to punish countries dealing with Russia over Ankara's purchase of the S-400 missiles.

Although Turkey was removed by the US from the joint F-35 fighter jet programme last year for its purchase of S-400 missile systems, so far, threats of sanctions have rung hollow, largely because President Trump has repeatedly ignored bipartisan pressure from Congress to punish Erdogan, with whom he has regular conversations and has expressed hopes that talks will resolve the issue. "I get along very well with Erdogan, even though you're not supposed to because everyone says “what a horrible guy", but for me it works out good," Trump said in an interview back in September.

The warm relation between Trump and Erdogan has, meanwhile, left the Turkish president feeling secure enough to extend its military influence in Syria, Libya, the Eastern Mediterranean and in Nagorno-Karabakh, where Ankara supports Azerbaijani allies in the recent flare-up in the conflict with Armenia. Turkey ultimately filling some gaps left by a US retreat from the region in recent years.

In fact, against the recommendations of his own Defense and State Departments, Trump gave the green light to Turkey's invasion of northeastern Syria last October after a phone call with Erdogan, and it was reported earlier this year he agreed to help Erdogan by intervening in a federal investigation into Turkish state-owned bank Halkbank.

The relationship between the two countries will ultimately cool if Biden wins the election.

Biden has been fairly vocal with regards to Turkey's political relationships, and earlier this month expressed his commitment to “call out Turkish behavior that is in violation of international law or that contravenes its commitments as a NATO ally," in a statement released by his campaign office on his vision for Greek Americans and US-Greek relations. Biden has also called on Turkey to stay out of the Azerbaijan-Armenia conflict.

For his part, it appears Erdogan sees Turkey's NATO membership and its opposition to Russia in Syria and Libya as a check on what any US administration might do. The US will need to rely on Turkey to some degree as the main ally in that region, so that does perhaps put a limit on the sanctions that Washington can take against Turkey.

We mentioned earlier that USD/TRY has advanced more than 15% so far in H2. However, it is TRY/MXN where the Biden trade looks to be most evident, with this currency pair having shed almost 20% during this period, hitting a record low of 2.568. This is largely reflective of the fact that Mexico stands to benefit from the return to a rules based global trade regime that is anticipated from a Biden victory.

It is worth bearing in mind that, the RSI for USD/TRY has edged above 70, a level that suggests the pair is overbought and may be due a reversal, whilst TRY/MXN has slipped under 30, which signals oversold, potentially.

However, whilst much of the downside has been seen already, given growing concerns about Turkish sanctions and geopolitical tensions and with the CBRT seemingly against raising the benchmark rate further, the path of least resistance is still to the downside for the Lira at least in the near-term, thus supporting a continuation of the long running trends in both USD/TRY and TRY/MXN.

Despite the more sizeable moves so far in H2, the latter may remain a more convincing play on the expectation of a Biden victory and for the fact that Mexico's Peso still stands to benefit from a high FX carry and also its relatively trouble free political landscape that is in contrast with many of its EM peers, including Turkey.

From a technical perspective the focus is now on the Fibo projections at 2.4891 and 2.3396 next for TRY/MXN.

The biggest threat to further downside would be if the unexpected happens and Trump wins the election, which would be more damaging for the Mexican Peso. In such an event, there remains the issue of the Lira's poor fundamentals, for which there is no quick fix, although a return to orthodox monetary policy with a sharp formal rate hike would help shore up sentiment towards Turkish assets. 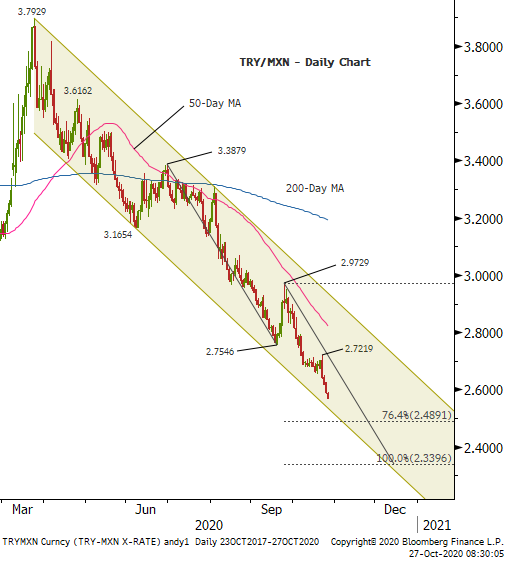