Viewpoint: EM Asia FX juggernaut rolls on but is momentum getting stretched?

11 Nov 2020 by Jonathan Cavenagh
Topics: Industry News |
Provided by IGM FX and Rates |
Get a free demo
Login to IGM

EM Asia FX juggernaut rolls on but is
momentum getting stretched?

The positives for EM Asia FX just keep coming. Hopes of a Covid vaccine, earlier than expected, is reducing concerns around a fresh slump in economic growth in the latter stages of this year and into early 2021. To be sure, there are still important caveats around vaccine development and delivery to enough of the population to curtail the need for lock downs that suggest it is still too early to sound the all clear from the standpoint of the global growth outlook. Still, we are arguably at a more positive point around vaccine development compared to this time last week and this is a net positive for the global outlook, particularly in the northern hemisphere economies.

Not surprisingly, the market is embracing pro-growth or reflationary themed trades. Back end yields are higher in the US and elsewhere, as are yield curves, while there has been a rotation towards small cap and value stocks at the expense of the tech related sector. The former is generally seen as benefiting from a broad-based economic recovery, while tech has clearly been a standout during the global pandemic (moves by regulators in the EU and China are likely to have weighed on tech performance this week as well). At the same time, growth sensitive commodities, led by oil, have rebounded strongly.

This news comes on the back of Biden's Presidency win, which is seen as having a less combative approach to globalist policies and trade related issues. This is a potential positive for the more trade orientated economies in EM Asia, particularly those in North East Asia (China, South Korea, Taiwan etc).

The ADXY is now at levels last seen in mid-2018. Indeed, the index is more than 4% above its 200-day moving average, which is quite stretched from an historical standpoint, see the first chart below. Including the current episode, in the +25 years of ADXY index, there have only been 4 major episodes where the ADXY has traded 4% or more above its 200-day MA. The second chart below plots the performance of the ADXY in the last 3 episodes in the 3 months before and in the 6 months after this threshold was reached. The vertical line on the chart signifies when the +4% threshold was reached. In the 1998 episode the ADXY kept pushing higher but at a more moderate pace. This episode followed the Asian financial crisis period. In 2009 and in 2018 the ADXY corrected lower after this threshold level was reached and then flatlined for some time afterwards.

Chart 1: ADXY now +4% above its 200-day MA, quite a stretch from a historical standpoint 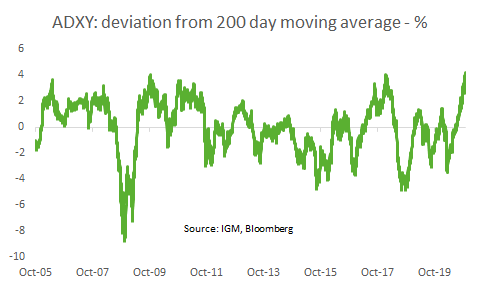 Chart 2: ADXY performance around episodes when it reaches +4% relative to its 200-day MA 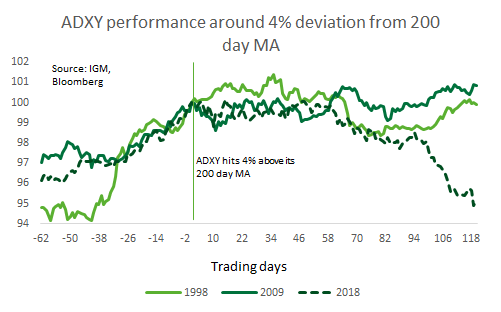 Of course, each cycle is different, but this is one indicator to be mindful in terms of extrapolating the continuation of recent trends. The third chart below plots individual USD/Asia pairs and their respective deviations from current 200-day MA levels. In the case of USD/KRW, we are close to 7% below the 200-day moving average. For USD/CNH we are less stretched in a relative sense, but these are close to the widest levels for the currency itself since it was launched. Other currencies are less stretched, particularly in the case of INR. 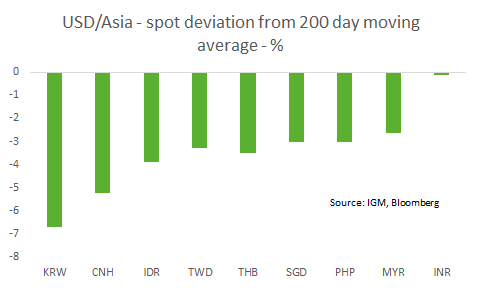 Equity inflows into the region, as captured by EPFR data, show a strong period of momentum in recent months. We often see short term flow momentum top out in the $5-10bln range, which we are now in. Wobbles in the tech sector could slow inflow momentum for markets like Korea and Taiwan. Still, the outlook for inflows over a multi-month horizon is still firm given the underlying positive fundamentals.

Chart 4: Equity inflows to EM Asia have been strong in recent months 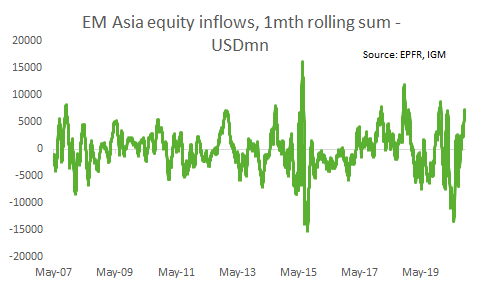 Less catch up to fair value in the period ahead?

We noted last week that our fair value estimates suggested there was still value in EM Asia FX. However, our short-term fair value estimates for USD/Asia now suggest most currencies are either fair or slightly expensive relative to cyclical drivers such as local equities, commodity prices and yield differentials with the US. Chart 5 below plots the deviation from fair value for each EM Asia currency that we run models for. Late last week, the same chart showed 7 out of 9 currencies sat either fair or cheap to the USD but that now sits at 3 out of 9. All in all, within the region currencies are now more in line with fundamentals or expensive relative to late last week. Part of this reflects the rally seen in currencies against the USD, which has shifted the gap relative to fair value. The other factor is fundamental shifts, namely via the sharp rebound in US yields, which has aided the USD from a fair value standpoint. 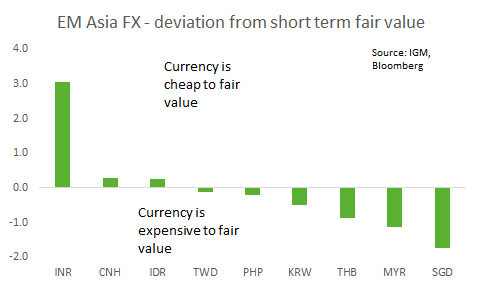 Closer convergence with fair value may leave less room to play catch up in the period ahead. The clear exception is INR, but we will dive deeper into the rupee outlook in a future Viewpoint. In the current context, USD/CNH and USD/KRW provide good examples of where both currencies have now largely caught up with fair value estimates, see charts 6 and 7 below.

Chart 6: USD/CNH has largely caught up to fair value 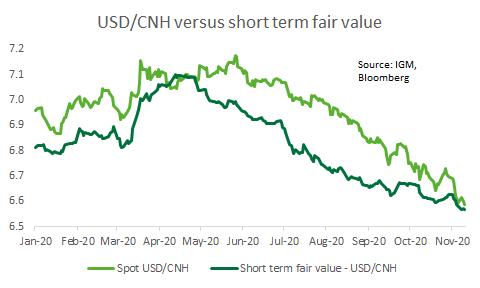 The final chart below overlays the 1 month change in global Covid cases against the 1 month change in the USD NEER. The first Covid wave in Q1 bought a significant spike in the USD, as the global economy slumped into recession. During the second wave, through June/July, the USD bounce was much more modest and in this third wave the USD generally been on a weakening trend. Of course, other factors are at play. The global economy is now in much better shape, even as further lockdowns, or the risk of, take place. Policy stimulus is also much more supportive, whilst a Biden Presidency is seen as USD negative to the extent it more supportive of globalist policies and less confrontational around global trade issues. Still, given there is less USD premium relative to previous Covid wave episode, we might expect to see less downside on positive Covid news (i.e. like that related to a vaccine) compared to earlier episodes. The risk of course is that this applies more to USD performance against other major or safe haven currencies, such as the EUR or JPY rather than against EM Asia FX.

Chart 8: USD has not rallied on this Covid wave, unlike earlier in the year 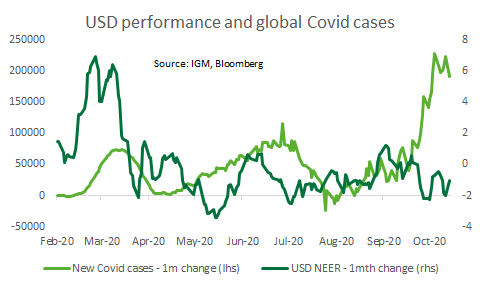