25 Nov 2020 by Natalie Rivett
Topics: Industry News |
Provided by IGM FX and Rates |
Get a free demo
Login to IGM

CBRT raises Lira prospects, but will policy shift be sustained?

A much needed step in the right direction from the CBRT

USD/TRY has come under some bid pressure after extending the downside on the month to almost 11% last week following the CBRT's efforts to restore some credibility back to the central bank.

The retrace may, in part, be a function of traders pausing to assess the monetary and fiscal policy outlook in Turkey, but perhaps of more impact is that locals still look to be taking advantage of the recent Lira strength to buy Dollars.

With losses of under 5% at the time of writing, USD/TRY is now no longer on course for its biggest monthly slide in years, but rather since late 2018, and whilst the CBRT's step in the right direction last week looks to have offered some light at the end of the tunnel for the Lira, the recent breather suggests it may still take some time to restore confidence back into the Turkish currency. To this, we note that whilst Turkey's default insurance costs have dropped this month, with the 5-year CDS just below 400bp, they are still elevated on the year, having started 2020 on the softer side of 300bp. At the start of 2018, prior to the currency crisis, the 5-year CDS was sub-200% (see the below dashboard).

Expectations were high heading into the 19th November policy meeting after new Governor Agbal signalled a 'pivot' back to conventional policy making and appeared to have President Erdogan's blessing to do what it takes to protect the Lira and curb inflation. Agbal and peers did not disappoint, hiking the one-week repo rate by 475bp to 15.00%, in line with the consensus forecast, and most importantly, reinstated it as the main policy tool in a move that restores policy predictability and transparency. Prior to this meeting, Turkey had raised funding costs sharply since July, but had only formally hiked rates once, in September.

For much of this year Turkey's real interest rate was negative, with inflation in double digits. The recent hike to the one-week repo rate has now taken the real interest rate above 3% (with inflation at 11.89% y/y in October), which is higher than almost any period over the past 10-years, except for the aftermath of the currency crisis in 2018. The increase is more symbolic than anything, as in reality it only lifts the effective policy rate by about 20bp (as the CBRT's weighted average funding rate was already 14.80% prior to the meeting), but the CBRT has ultimately passed the first test, meeting what was required of the market.

The policy statement also struck the right tones, stating that all factors affecting inflation will be considered and the tightness of monetary policy will be decisively sustained until a permanent fall in inflation is achieved. 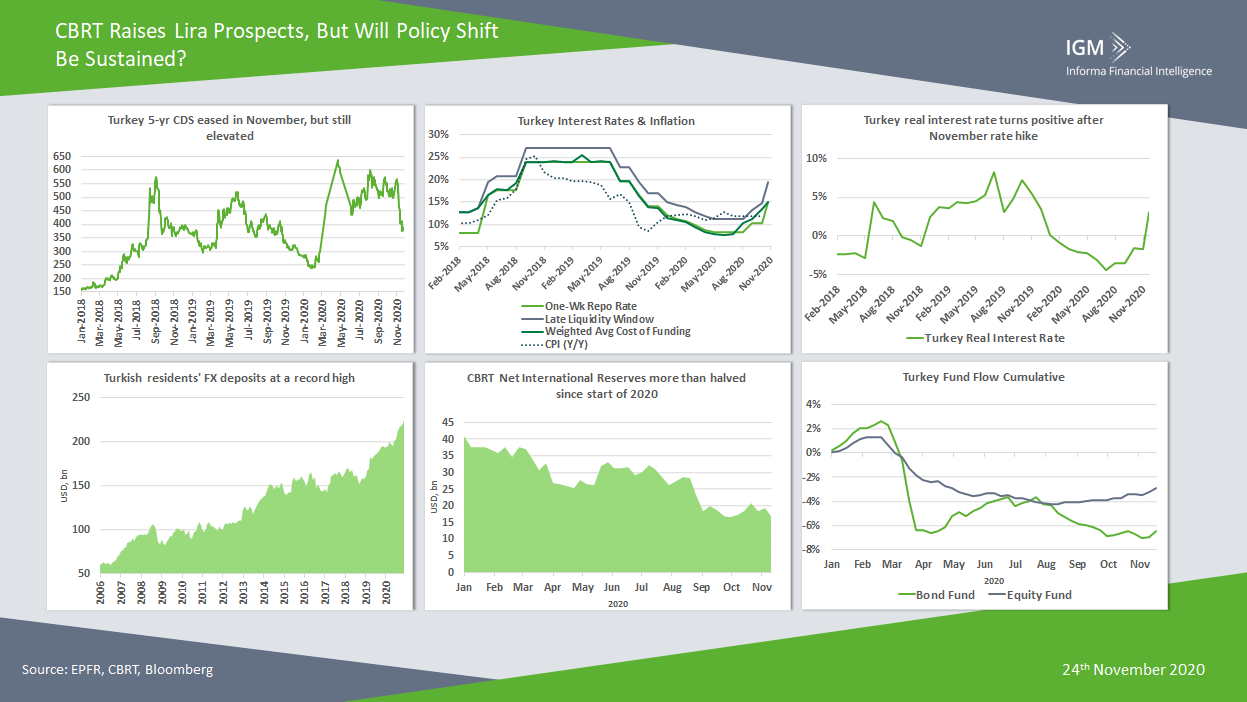 An improving outlook for the Lira, but we are not getting too carried away

For locals and companies, with the Lira having weakened every year since 2012, a period of strengthening is perhaps no reason to sway from the longstanding bias towards the Dollar, with a stronger local currency in fact, offering more favourable conditions to acquire Dollars. Foreign currency deposits of Turkish residents continued to rise this month, hitting a new record peak of USD226bn in the latest week ending 13th November, per the central bank (see the above dashboard).

However, it is possible this recent upside in USD/TRY that we are seeing will be shortlived, as was the case in September 2018, when it more or less pared its initial losses after the shock rate hike, but depreciated in the weeks that followed. A repeat of this situation could therefore, offer some renewed sell-opportunities in the near-term, but the central bank will need to stay the course on reining in inflation if it is to curb the demand for dollarisation in the economy and prevent the central bank's net reserves - which have more than halved since the end of 2019 (see dashboard) - from dwindling further.

Since the policy meeting, we have seen some positive calls on the Lira, whilst there has been some suggestion (via Bloomberg) that it is a leading candidate to be the FX winner of 2021, which would mark a much needed turnaround for the Turkish currency that is considered deeply undervalued.

If the Lira can appreciate further that will help contain inflation, boosting the real yield appeal. We mentioned previously that Turkey's real interest rate is now above 3%, which compares favourably in the CEEMEA sphere, but prior to this, the real interest rate decreased from highs of just over +8% in the summer of 2019, to in excess of -3% (as can be seen in the dashboard). This, as the policy interest rate fell from a high of 24.00% in June 2019 to 12.00% at the end of 2019 and to 8.25% in May of this year, whilst inflation remained elevated in double digits virtually throughout this entire period. Those rates made the currency less attractive to investors.

Still, at this stage, we would not want to get too carried away with the Lira's prospects over the mid-term, as we would still question how long the apparent monetary policy shift can last.

Agbal will now have to maintain his pledge, holding the policy rate high for an extended time to rein in inflation, if central bank credibility is to continue strengthening and also help begin a process of rebuilding depleted foreign exchange reserves. This is a task that may prove difficult if President Erdogan grows impatient and returns to his calls for more favourable rates for borrowers. Erdogan has already been repeating his unorthodox view that high interest rates cause inflation, which briefly caused the Lira to slump ahead of the rate decision last week.

Furthermore, it is crucial the government implement necessary reforms to complement the monetary policy stance to sustain any turnaround in investment/portfolio flows. As can be seen in the dashboard, Turkish bond and equity fund flows, tracked by EPFR, have been net negative for the past 8-months and equity fund flows only recently appear to have found a bottom.

In further encouraging signs, new Treasury and Finance Minister Elvan has stated that the recent monetary policy steps will be accompanied by fiscal discipline, while the banking regulator has already taken another step towards mainstream economic management by abandoning (from 31st December) its asset ratio rule that compelled lenders to extend credit and buy government debt, to help cool the lending boom. Yet, like with monetary policy, there remains the risk that Erdogan will interfere with much needed structural reform.

It will not be long before the general election in 2023 comes into focus and for Erdogan, boosting economic growth may once again become an overriding goal. Much depends on the path for the economy in the interim, the latest IMF forecasts predict the economy will shrink 5% this year, but rebound by 5% in 2021. If the recent Covid-19 vaccine breakthroughs helps the next tourist season, the rebound could be greater.

With regards to USD/TRY, the recent bounce may be considered an opportunity to re-engage in short positions in due course for any traders encouraged by the prospect of a sustained positive real interest rate into year-end. As we have highlighted though, whilst the CBRT has taken a much needed step in the right direction, the real test for the Lira will be whether this conventional policy approach will be maintained beyond the mid-term and if the government delivers complementary fiscal policy.

Resistance at 8.2099, the 11th November high, is key for near-term USD/TRY direction. The charts suggest a sustained break is needed to confirm a resumption of the uptrend towards the record high of 8.5793 from early this month, but failure above 8.2099 would damage upside prospects and threaten a return to the 19th November (post-CBRT) base of 7.5151, possibly lower. See below for more detail. 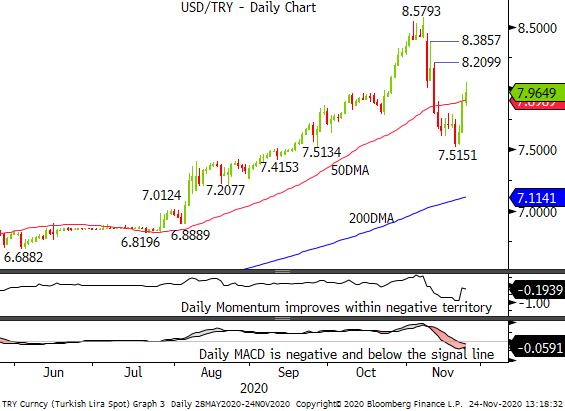