Viewpoint: Korean won outlook positive but be prepared for a bumpy ride

14 Oct 2020 by Jonathan Cavenagh
Topics: Industry News |
Provided by IGM FX and Rates |
Get a free demo
Login to IGM

Viewpoint: Korean won outlook positive
but be prepared for a bumpy ride

This week has seen the USD/KRW drop below the 1160 level. Moves below this level have not been sustained in 2020. Simple valuation models suggest this time could be different though, as positive cyclicals and the broader macro backdrop don't appear to be fully priced in at current levels of the won. The multi-month trend looks set for a sustained break of 1150. However, the trend move lower could still be a bumpy one. The market is taking positive ques from Biden's impressive poll numbers but KRW will still be vulnerable to any bouts of global risk aversion. The Korean authorities are also likely to be mindful of the pace of won appreciation, with USD/KRW starting to look somewhat stretched relative to its 200 day MA and BoK FX reserves rising strongly in September. Relative value trades, such as short RUB/KRW may be a safer expression of a view in the near term. See below for more details.

In 2020, breaks below the 1160 level in USD/KRW have not been sustained. Indeed, we need to go back the early parts of 2019 for when USD/KRW last traded sustainably below the 1150 level. Some simple valuation metrics suggest this move can be sustained though. The first chart below overlays spot USD/KRW against a fair value for the won based off financial market variables – including equities, yield differential with the US and commodity prices. The model explains around 60% of the USD/KRW movements on any given day. As the chart highlights the fair value estimate is below current spot levels in USD/KRW – with fair value sitting at 1136 versus current spot of ~1155. This suggests the won is around 1.8-1.9% cheap to the USD. Higher equities and commodity prices, both signals of an improving global backdrop, are the main sources that are driving the fair value estimate higher, whilst yield differentials have been steady in recent months. 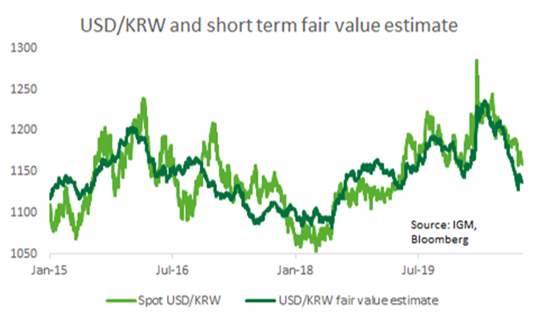 A similar conclusion is reached when looking at slightly longer term macro variables. The second chart below overlays yoy changes in KRW versus the USD against an estimate of yoy changes based off the yoy change in the US ISM index and China aggregate funding changes. The fit of this model is ~50%. Higher values for both variables - the ISM and aggregate funding, translate into higher values of KRW versus the USD. This reflects the fact that both variables have a strong positive correlation with Korean export growth, as improving demand in both the US and China boosts external demand. This model suggests that KRW should be closer to 4% higher against the USD in yoy terms, rather than the actual current pace of 2.3%.

We noted in our update last week the uncertainty surrounding the medium term growth outlook, with second wave Covid fears and fiscal policy uncertainty the main concerns (see this link for more details). On the fiscal policy front at least, the market may be growing in confidence of a Biden victory as opinion polls suggest that much and if realized is likely to deliver fresh fiscal stimulus (albeit with some uncertainty over the time frame). To the extent this gives confidence in the global growth backdrop into 2021, it should benefit growth orientated currencies like the won, all else equal. 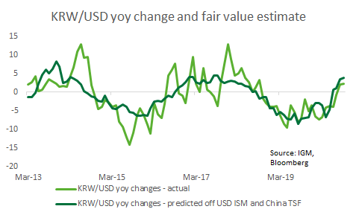 Broader measures of KRW valuation also suggest it is not expensive. The KRW NEER (see BISBKRN on Bloomberg) is up close to 3% in the past few months but remains 1.5% below the 2019 peak, or 5% below the 2018 peak. On a real effective exchange rate (REER) basis, these comparisons are even more favourable. The continuing current account surpluses adds to currency appreciation pressures and as we argue below, the most recent month of September appeared to show strong USD buying from the BoK, which hints at firm underlying BoP pressures in favour of the won.

Equity jitters and pace of appreciation can be short term headwinds

Equity market jitters, associated with the US election outcome or otherwise, can still be a source of volatility/weakness for the won. The third chart below ranks EM Asia average FX returns against the USD in months where global equities fall by more than 1 standard deviation in that month (the sample period is 2015 to present). KRW is the poorest performer amidst the the North East Asian and current account surplus currencies, although it tends to do better than INR, MYR and IDR. As we noted in our update last week, there is still a risk of volatility over the coming month, which may give pause around chasing USD/KRW lower sub the 1160 region. On a side note we do note that IDR being the worst performer is a risk to our short AUD/IDR position, although the short AUD leg does provide some offset in the event of a sharp risk-off episode. 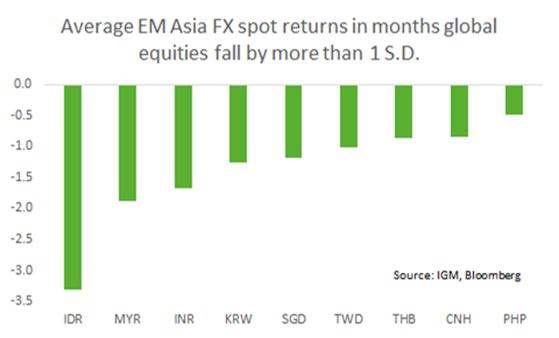 USD/KRW is already somewhat stretched relative to its 200 day moving average, see the fourth chart below. The Korean authorities may be mindful of the pace of won appreciation in this context. Beyond a 4% deviation from the 200-day MA and we could start to see risks of mean reversion rise. On this point the Korean authorities still appeared to active in the FX market in September. Chart 5 below plots the change in BoK's FX reserves after adjusting for FX valuation effects. Positive bars indicate USD buying, all else equal, although we this is only a proxy for such behaviour. September did coincide with USD/KRW falling to lows not seen since March, so some degree of smoothing on the part of the central bank is arguably not surprising. 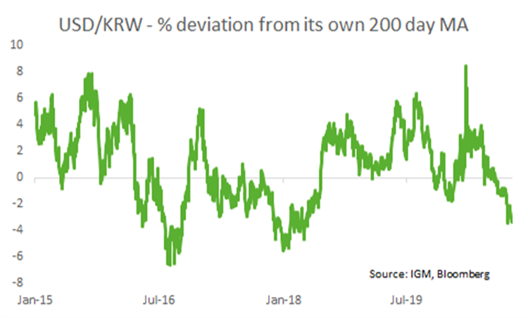 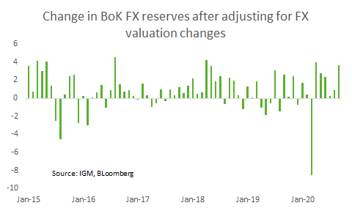 The Korean authorities will also be mindful of uncertainties surrounding the outlook, they said as much after the September trade report, with exports boosted by more working days this September compared to last. Domestic confidence measures have also weakened somewhat, which in part may reflect higher Covid numbers in recent months.

Strategy: All in all, cyclicals and the macro backdrop suggest the multi-month outlook for the Korean won is positive. However this piece has highlighted that the trend could still be a bumpy one. Relative value plays like short RUB/KRW may be a safer expression of a view in the short term, particularly given Biden's current lead in the polls. See this piece from Christopher Shiells advocating this trade from earlier in the week.