20 Oct 2020 by Marcus Dewsnap
Topics: Industry News |
Provided by IGM FX and Rates |
Get a free demo
Login to IGM

- Uncertainty caused by re-allocation of spending across time & sectors

The BoE's Vlieghe spoke earlier. In highlighting the uncertainty facing the economy, he noted that downside risks are crystalising and which implies that risks to the economy are skewed to the downside and therefore risks to monetary policy are skewed towards further stimulus. There are two points worth noting on his comments here. One is that QE will not be as effective now as it was in March. This we note does not preclude more QE. If market rates were to rise (or threaten to become disorderly) because, for example, government issuance plans, then asset purchases will almost certainly be expanded. The other point is that Vlieghe doesn't currently think negative rates will be overly counterproductive to monetary policy aims. This suggests that, if the Bank eventually feels negative rates are worth pursuing, he will vote in favour. However, given the research on negative rates isn't likely to be completed this year, then QE is the path to be travelled near-term.

Whilst noting that there has been rapid growth since lockdown was lifted, Vlieghe highlights that here is quite a way to before the UK economy can be said to have recovered. 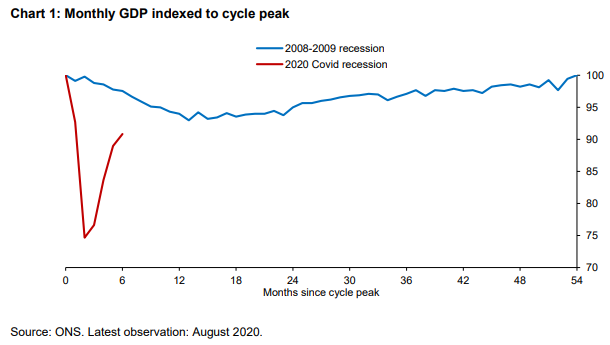 9% of private workers remain on furlough and he does not expect them all to lose their jobs (i.e. re-employed or find other work) but given rising redundancies and vacancies at just 60% of start of year levels, it is;

'difficult to see a scenario where all of the remaining furloughed workers are reintegrated seamlessly into the labour force.’

Vlieghe's view is that the risks are skewed to even more job losses which will mean more slack in the economy than the Bank's central projection. 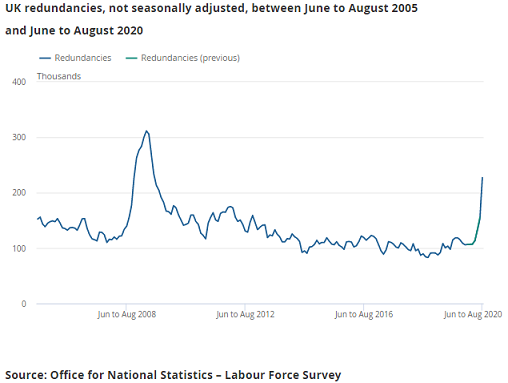 When discussing the so-called trade off between the economy and public health Vlieghe says evidence suggests that most economic damage does not come from government imposed restrictions, but those which people voluntarily impose on themselves. Where the virus is widespread, consumers avoid crowded places and reduce 'social spending' i.e travel, hospitality, leisure, culture. Where a range of measures are in place to contain the spread, there is less of an economic hit as consumer engage in more 'social spending'. This, we note is that 'fear' factor at work and is interesting given the UK government's policy of local versus national lockdowns (i.e. do not want to 'punish' those areas where infection rates are relatively low). Vlieghe himself points out that between the extremes of full lockdown until a vaccine appears (huge economic cost) and no measures (much less economic cost) there is a situation where measures to contain the virus will aid both public health and the economy and importantly, it is misleading to think that, without government restrictions, the economy would have continued to function as normal.'

- Studies have shown that mobility and economic activity had already declined before lockdowns occurred thus can't attribute all of the fall in economic activity to government imposed lockdowns. Behaviour had already started to change.
- Studies indicate (to Vlieghe) that most of the spending falls are down to voluntary restrictions (as discussed above).
- Preliminary findings (from cross-country data analysis) suggests virus prevalence has a direct impact on economic performance and government restrictions have a much smaller additional impact.

Vlieghe clarifies that none of this is the same as saying that government imposed restrictions are 'bad' for economic performance as restrictions supress the virus which is good for both public health and the economy. The latter is relative to the scenario where there are no restrictions, a situation that would incur a lot of economic damage. Currently, differing economic performance across countries does not seem to be primarily explained by governments making different public health/economic trade-off. It is,

'striking that this is a repeat of the patterns we also observed in the 1918 pandemic.'

So, the above suggests that the higher the virus prevalence, the greater the drag on economic activity and therefore the recent infection rate rise to an extent represents a,

'crystallisation of the downside risks that the MPC has highlighted in our communications in the past six months.'

Thus, the speed of the recovery will probably be slower under current (i.e. higher virus prevalence) conditions with the attendant risk for larger job losses.

Consumers have adapted which can be seen in the level of retail sales. Yes, there is some pent-up demand but overall, there has been strong substitution across categories and time. The known-risk here is that pent-up demand will not go on forever, the unknown is for how long. This is substitution across time and probably applies to several categories of durable goods. There is a downside risk, therefore, to retail sales growth. Sectoral substitution has hit hospitality but benefitted food at home and forms of entertainment and recreation. However, sectoral substitution raises uncertainty because of structural change. More people will work from home, hence, some of the damage to hospitality will be permanent for instance and the change to on-line shopping from bricks-and-mortar has speeded up. 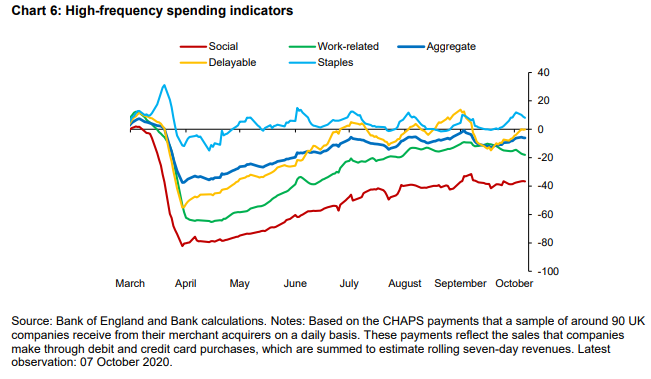 *For more on above graph, see Vlieghe, Assessing the Health of the Economy, 2020,page 10, HERE

This highlights clear implications for the labour market where spending reallocation will mean those working in declining industries will need to find work in expanding industries. A current problem is that nobody can be certain either which spending reallocations will stick and of those that do, the extent/depth. There will at least be some temporary/structural unemployment. This uncertainty makes it difficult for companies in expanding sectors to know whether this is temporary or permanent which impacts investment decisions. Will there be enough investment and new jobs to offset the decline elsewhere? This impacts supply and demand overtime. Yes, given time the economy will adjust, but in the meantime, the amount of slack created by suboptimal demand is a concern for monetary policy. And potential supply could be impacted - in either direction (time to train and learn new skills a drag, workers moving to more productive industries a positive). Surveys indicate investment and employment intentions remain weak and there is likely to be a negative impact from uncertainty surrounding Brexit.