10 Nov 2020 by Marcus Dewsnap
Topics: Industry News |
Provided by IGM FX and Rates |
Get a free demo
Login to IGM

- Pfizer the start of virus control?

So, we have a new President-elect team in the US. The incumbent. however, is not going quietly. He is set to continue challenging the election result until at least the certification process is complete (i.e. official results) - and this will take several weeks. There are some recounts, but these are unlikely to materially change the outcome. Trump remains President until January 21st and with that, the use of Executive Powers is still his to deploy. There is, therefore, a risk that he will use these over the next 10-weeks or so. The transition period is unlikely to be smooth. There is a fiscal package that needs to be negotiated (likely to be smaller than the Dems would have liked) and who will make-up the Biden administration. A smaller stimulus package, for instance, will mean the Federal Reserve shouldering more of the burden to support aggregate demand. Perhaps this is why the equity markets are content at present - the likelihood of GOP Senate control means less in the way of tax rises and more in the way of Fed stimulus. This doesn't include the impact of the Pfizer virus vaccine news which if it comes to fruition is a game changer and will clearly boost the economy and risk sentiment. 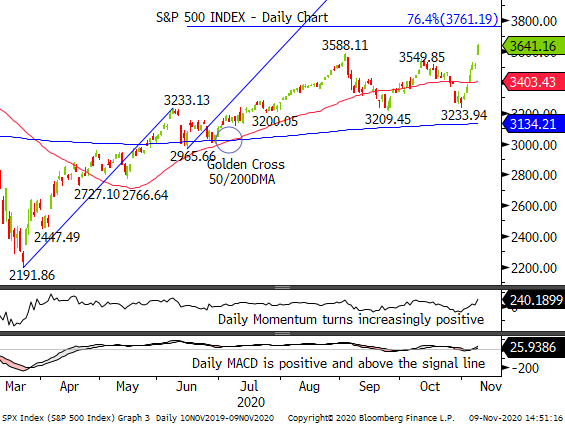 However, Executive control maybe certain, but Senate control isn't which leaves probably the most important near-term election related risk event on January 5th. The two runoffs for the Senate seats in Georgia. Even with a few national results still to come in, it looks as though this ballot will determine the balance of power in the Senate. The Democrats will probably need to win both in order to take control of the Senate, 50-50 with VP Harris casting the tie-break vote. Any Cabinet appointments need Senate approval. Republicans will block anything remotely contentious. If Democrats control, then Republicans loose committee chairs and Democrats will therefore run key committees. The WSJ points out that this could mean Bernie Sanders running the Budget. Even though Democrats will not have the 60 seat majority to end debate on most topics, the Harris VP vote will allow for the passage of many spending and tax measures. Despite Democrats (probably) winning the Georgia Presidential race, it is likely that those moderate Republicans who backed Biden will revert to the GOP in the Senate to offer a 'check' on the new administration. In other words, it will be very difficult for the Democrats to win these two seats. Thus without control, it becomes far more difficult for Biden to enact his tax rises for instance. Still, there will be more Senate seats in play during the 2022 mid-terms which could swing the Senate to the Democrats. It looks as though there are more at risk Republican seats than Democrat. Traditionally, however, the sitting President's party usually looses a few seats.

2022 seems a long time to wait for potential Senate control but one issue will be a significant impact of the Biden-Harris Presidency. The unemployment rate. Getting the virus spread under control and people back to work will be a huge plus for the economy and therefore the midterms (and for the 2024 Democratic Presidential candidate). The economic path will be determined by the virus path still stands as a mantra - although if the Pfizer vaccine news is a true game changer, the new President is already well on the way to an improved economy.

Longer-term climate change/environment and diversity/inclusion are longer-term (which is not the same as saying they can't be started immediately) challenges/influences as they require changes in behaviour and economic structure. On climate change and the environment, there maybe a helping hand from the Fed and asset managers. If climate becomes part of the Fed's framework (as seems almost certain), the CB could purchase 'green' debt as part of its QE programs. The asset management industry is also forging a new ESG path that is forcing corporate US to rethink objectives so as to fall under the ESG banner. This is heavily linked to diversity and inclusion too. The 'market' then, may support Biden-Harris aims.