Everyone is worried about inflation. Everyone that is aside from central bankers. Transitory is what they called it after the Great Financial Crisis (GFC) and this is how they refer to it now.

Central bankers concern themselves with y/y rates of inflation as per mandates, but within this also look at trimmed mean measures of inflation, which cut out the most extreme component price movements i.e. a percentage of those rising most and falling most, leaving the focus on somewhere between 70% and 90% of prices. Not every country publishes trimmed mean measures of inflation. However, for those that do, the numbers are still largely within longer-term ranges, which for a central banker will mean some sign of price stability.

Whatever central bankers do consider inflation wise, it is clear some markets (currently) are not looking through what policymakers believe is short-term inflation volatility. For example in the US, the 10-year breakeven rate is up at fresh 8-year highs, which implies PCE closer to 2.5% y/y than 2%.

The conversation around inflation is beginning to change though. As we have noted, the problem with the current rise in staple prices is that it reduces discretionary real disposable income (a tax on consumption) and this becomes a potential economic growth constraint that extends the time taken for economies to recover. And if demand profiles are shallower, then hiring profiles will also be, which leaves excess labour bearing down on the sort of wage growth that central bankers want to see in order to generate sustained demand side inflation.

Central bankers are more likely to front up to this by maintaining extremely accommodative policy for longer. Hence breakevens can remain elevated but real yields towards the low end of the range. 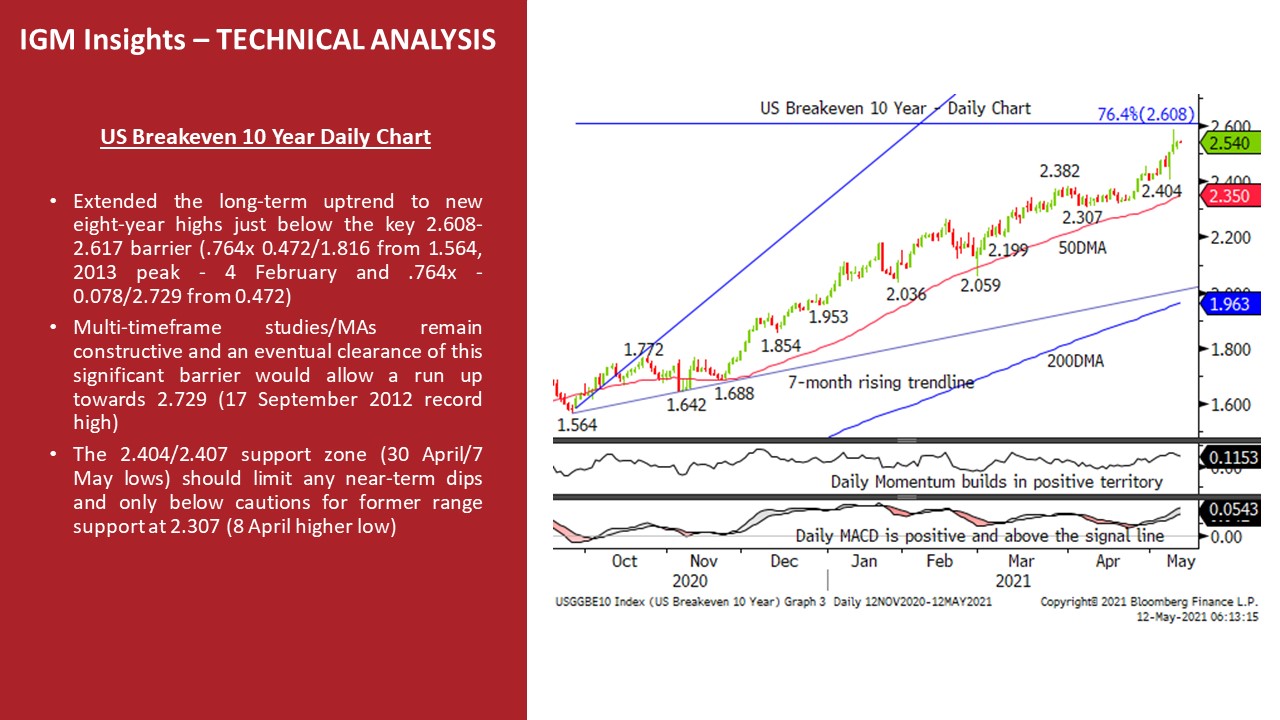 A number of factors suggest EM Asia inflation pressures will rise strongly as we progress through Q2, with low base effects from last year and surging commodity prices the two key drivers.

However, this is unlikely to provoke a strong tightening bias from regional central banks. EM Asia central banks are mostly seen to maintain their current policy rates and accommodative stances for the foreseeable future. If anything, downside risks to this view remain as fresh Covid waves and uncertainty over the vaccine rollout delay the economic recovery process. Generally low core inflation also argues against any urgency to normalize policy.

The main risk to this view is likely to rest with the US exiting accommodative policy conditions sooner than expected. Such an outcome can pressure EM economies, as it has done so in the past. However, traditionally vulnerable EM Asia economies like India, Indonesia and the Philippines look to be in a better position to withstand such pressures compared to previous cycles.

Economies in the region where GDP is close to or above pre-pandemic levels, particularly those that are quite export orientated, are also likely to remain cautious around tightening policy too soon. Domestic demand in these economies is still recovering and unemployment rates are still elevated. 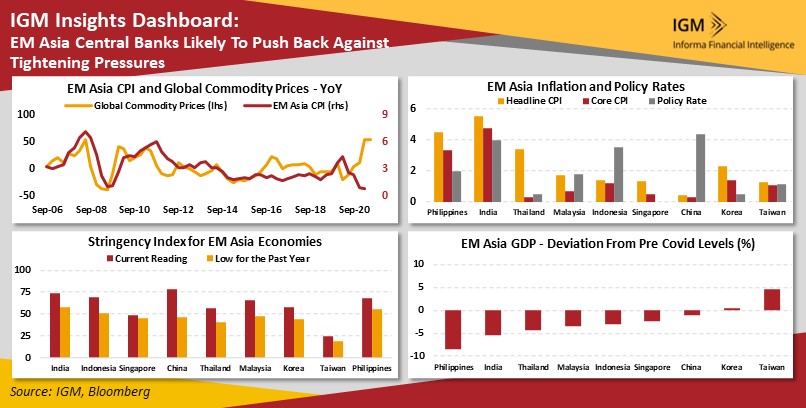 A key feature of rising inflation concerns has been the surge in commodity prices. Base metals have been a standout, with copper surging 17.5% to record highs above USD485/lb. The CRB Food Index has surged to its highest level since June-2011, up 17% since Mar 15. Only Brent oil prices have struggled to match these gains, after an initial sharp drop in the last two weeks of March to below USD62/brl. It has since recovered to test USD69/brl, to be flat since March 15. Amidst this backdrop the 10yr UST yield has managed to pull back under 1.60% after an initial spike to 1.74%.

Importantly though, the continued recovery in base metals remains supportive for the backdrop of CEEMEA/LATAM currencies and suggests the on-going recovery in the global economy. Outright yield levels and yield momentum also remains in favor of such currencies.

Even if the rally in raw materials peters out at current levels, monetary policy in these countries have also turned supportive in recent months. Central banks in Brazil, Russia, Turkey, Ukraine and Georgia have already raised rates this year to tame inflation pressures. On top of that, the SARB may be keeping rates at ultra-low levels, but real rates are positive, there are clear hawkish biases emerging in the CEE region, and in LatAm, the Mexican the central bank has shifted away from further easing and the Chilean central bank is expected to scrap its dovish neutral outlook soon.

In turn, we see continued scope for upside in the MSCI EM Currency Index, which as per the below technical chart has scope through 1745.98 to 1772.59 (1692.71/1735.65 range target). The specific currencies that stand out are those with positive real rates, namely Turkey and S.Africa. The one region that is not seen pushing back against rising inflation is EM Asia (see above). 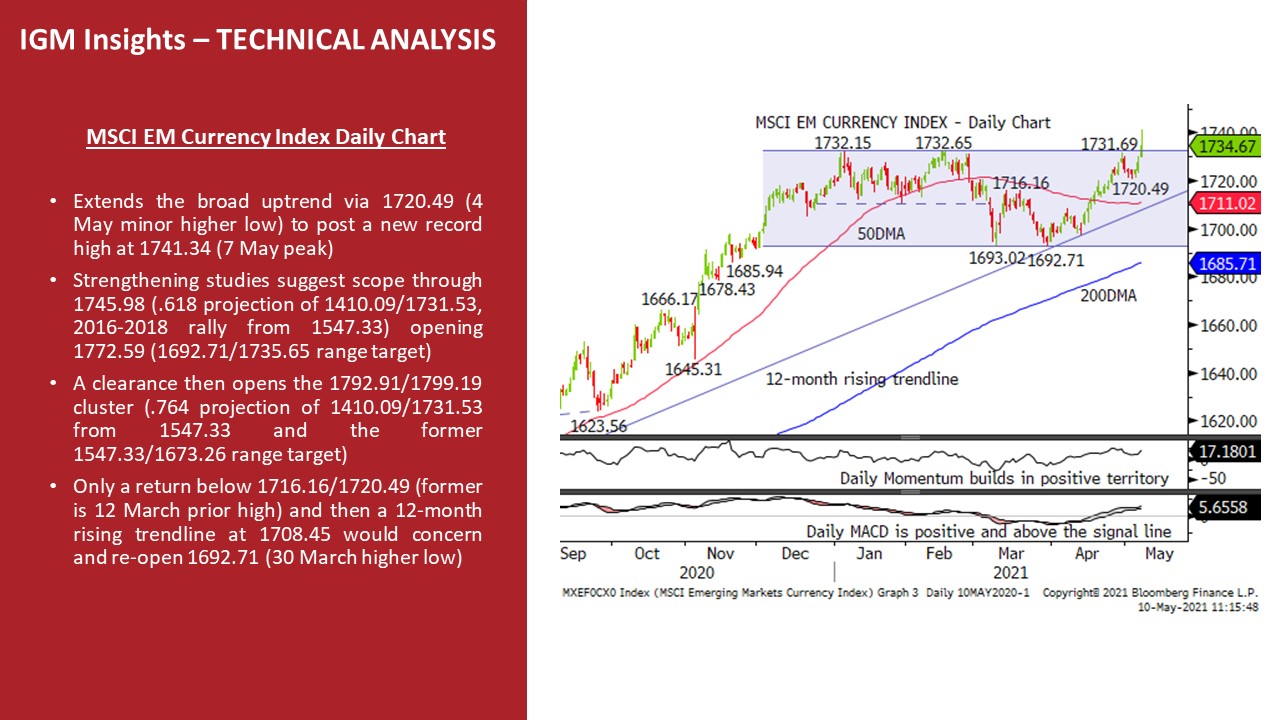 China Huarong became a key focus in April. It's rising default risk resulted in a downgrade of the credit rating by three notches to BBB by Fitch. Though PBOC reportedly is considering to take on at least CNY100bn worth of assets from Huarong, uncertainties remain as so far as no official rescue plan has been announced.

Due possibly to the severity of the Huarong debacle, the Politburo meeting on 30th of April surprisingly did not touch on the topic about leverage again. Instead, the Politburo reiterated "policy continuity, stability and sustainability" and "no sharp turns" while urging to "adopt a prudent monetary policy to maintain reasonable and sufficient liquidity". The statement was meant to ease concerns about hasty tightening. As such, we think that there will be no significant change in monetary policy stance before the CCP's centenary celebration, and that any acceleration of inflation pressures will more likely be addressed by targeted measures than by sudden credit tightening.

With the supply of CGBs starting to pick up (chart 1), liquidity may tighten in May. We expect a liquidity gap of about CNY1350bn in May, far larger than CNY500bn in April. Due to that, there is a good chance that PBOC will resume OMO net injections later this month in order to meet the Politburo's need, i.e. to maintain reasonable and sufficient liquidity. 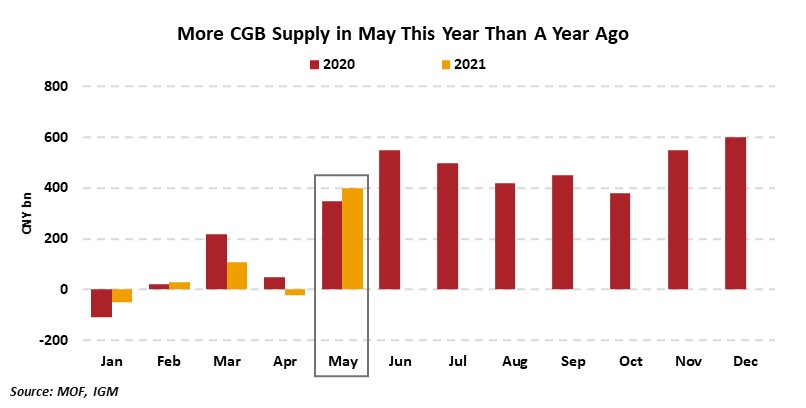 As far as the bond market is concerned, we think its performance in May will be more impacted by the near-term outlook of A-shares. Historically, A-shares do not fare well in May. Since 2010, we have seen the Shanghai Composite Index's May-low at 2-13% below April's close for as many as 8 times. It is worth noting that 6 out of those 8 times posted more than 4% below. That means May is usually not a good month for A-shares. Then what about the performance of CGBs since 2010? Taking the 10-year CGB yield as a yardstick, we note that the bond market sold off for 4 times and gained ground for 7 times over the past eleven Mays (chart 2). 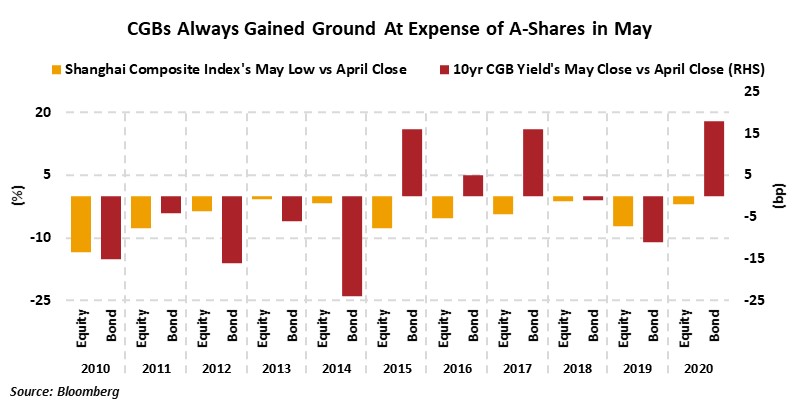 In our view, it is more likely than not that banking system will remain steady or turn a bit looser this month while A-shares may be under pressure due to the May factors. As such, we prefer to buy CGBs on weakness for a potential increase in demand for fixed income instruments as a result of selloff in A-shares.