Extend and pretend is a cynical way of describing an intermediate step adopted by many lenders when they realize that they are probably not going to get their money back. In theory, by offering easier repayment terms they hope to keep distressed borrowers current, but often it just delays the day of reckoning.

The government version of this, moral hazard, has allowed millions to avoid rent, mortgage foreclosure, and student loan payments for more than a year under various pandemic relief programs. Absolutely no one questions the good intentions of financial aid during an unprecedented global health crisis, but we are quickly approaching the uncomfortable point in time when those programs are scheduled to end.

I'm pretty confident in saying that the 'pretend' part of the relationship isn't limited to the lenders as many renters, mortgagees, and student loan borrowers have come to believe that they will somehow be absolved of past-due balances. Candidate Joe Biden actually ran on a platform of canceling student debt.

Forty million people account for $1.7 trillion in student loan debt. According to the New York Fed, a large percentage of those loans were not being repaid even before the pandemic and when the government suspended payments and interest. The clock restarts on October 1.

The federal rental eviction moratorium, which has already been extended twice but is scheduled to end on June 30, still shields about 12 million renters.

More than two million are under mortgage payment forbearance, also due to expire at the end of the month even though some banks have chosen not to enforce foreclosure until 2022.

These topics don't receive a lot of attention in the financial press but unless the Fed steps in to provide further relief, millions will face personal fiscal cliffs over the coming months as repayments are piled on top of higher living costs.

The bond market can see this coming over the horizon and might be something to keep in mind when yields shrug off another big CPI number on Thursday. 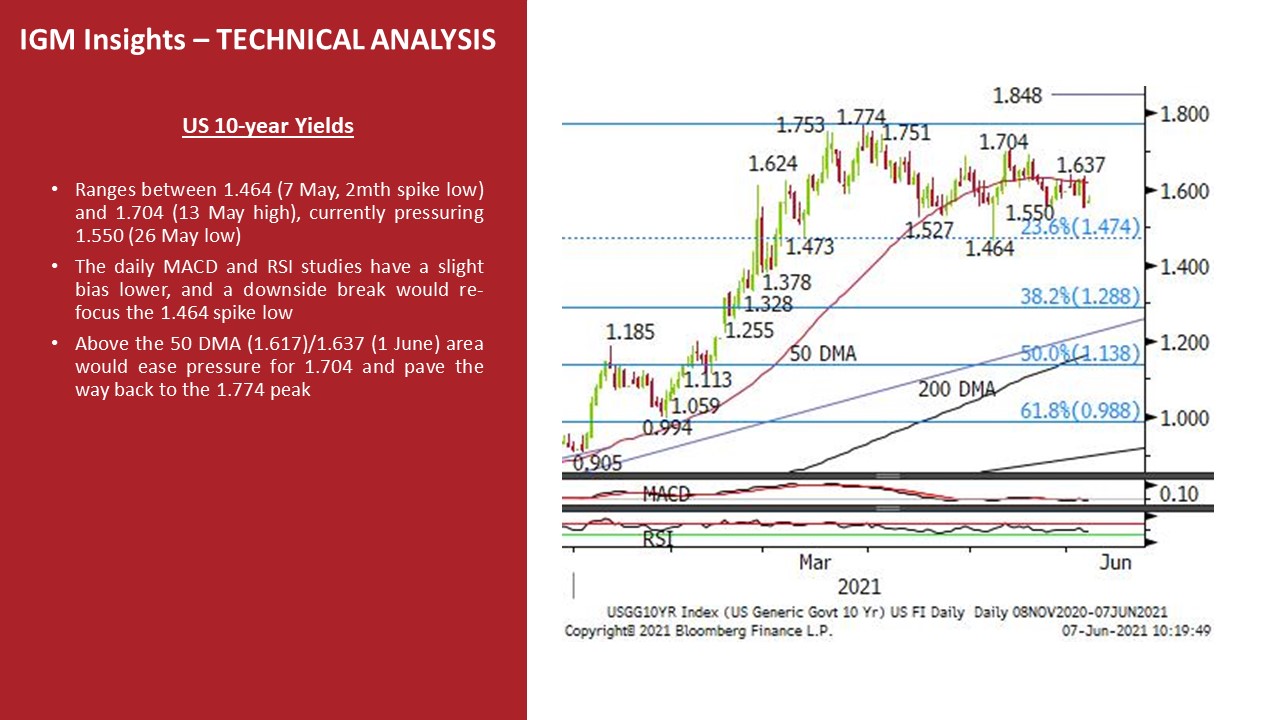 EM currencies enjoyed a seasonally abnormal month of gains in May, thanks largely to the broadly weaker USD, the Fed's continued 'transitory inflation' rhetoric and calm US yield environment.

Seasonality for June suggests the better EM FX backdrop will continue into this month, albeit with quite divergent performances across the bloc. Signals from other asset classes are mixed, with equities usually lower, which also tends to weigh on equity inflows into EM. Commodities are mixed, with oil typically rallying further in June, while base metals weaken a touch. US yields in the 10yr don't tend to exhibit a significant trend in either direction in the month. A continued range bound environment for US yields in June of this year would be a positive for EM FX, all else equal.

Looking at performances by region, EM Asia FX tends to show generally negative returns, albeit fairly modest ones, which appears to reflect weaker equity and portfolio inflow momentum. PHP and INR are typically the worst performers. Elsewhere, CZK, HUF and BRL tend to outperformers, while CLP is a laggard. The current macro set up suggest these trends can continue in June, although these are some risks to be mindful of. 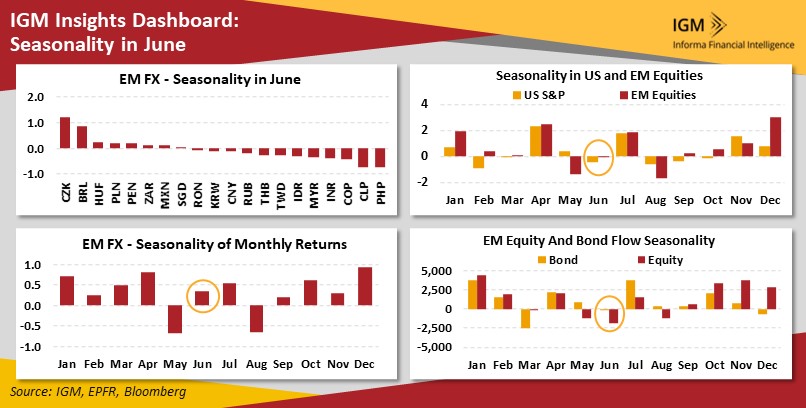 China Huarong became a key focus in April. It's rising default risk resulted in a downgrade of the credit. As soon as PBOC showed its concerns over the rapid pace of RMB appreciation by announcing an increase in FX deposit reserve requirement ratio from 5% to 7% on 31 May, USD/CNH successfully bounced off the year-low of 6.3520. Despite that, we think that the ongoing USD/CNH bound will not last long and that the downtrend of USD/CNH will resume once the short-covering is over. Based on what happened in 2016 when RMB kept depreciating, we think a reversal of the underlying sentiment on RMB will not happen this time round until PBOC takes more measures to show its determination to stop RMB appreciation.

In the onshore interbank funding market, liquidity basically did not react to the recent increase in FX deposit reserve requirement ratio. In our view, as long as foreign inflows into China's onshore market remains strong, any tightening in the RMB liquidity market will not be significant and sustainable. Chart 1 shows that individual/corporates' net sale of foreign currencies increased considerably during Q2-Q3 last year, in line with the appreciating RMB against the USD. During that period, we saw a sustained increase in foreign currency deposits, suggesting weakening of foreign currencies against RMB was taken by many individual/corporates' as an incentive to increase FX deposits. That being said, overall liquidity instead of tightening, turned ample. That could be the reason why liquidity has kept staying ample since the beginning of the year despite PBOC's reluctance to make a net liquidity injection (chart 2). 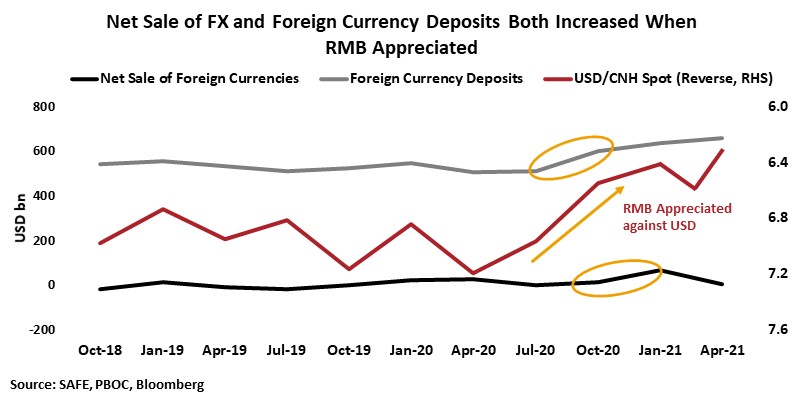 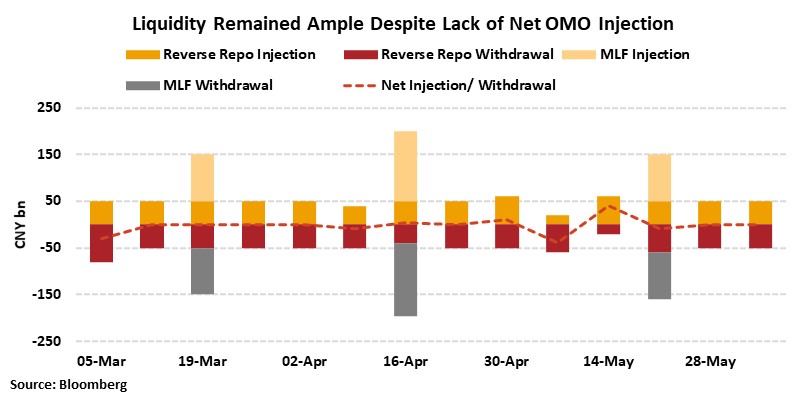 Given the likelihood of an imminent renewal of the RMB appreciation trend, we reckon that there is very little room for banking system liquidity to go tighter in the near term. Against this backdrop, the yield curve will likely turn steeper again (chart 3) even if selling pressure on bonds may increase a bit over the rest of the month due to quarter-end factors. 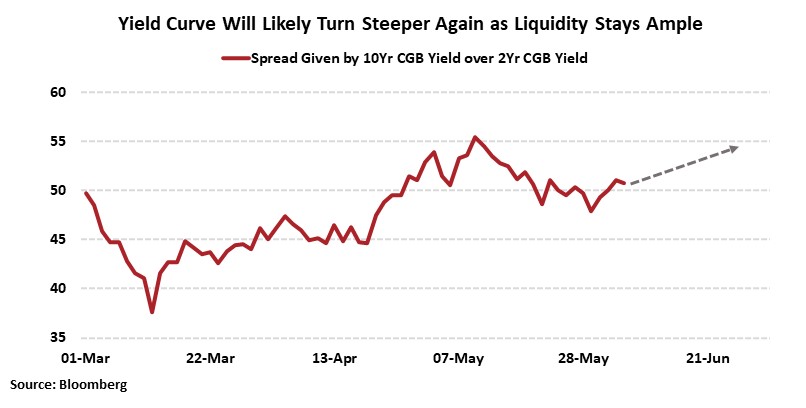 Like April and May, we continue to bet on the Eur/Gbp's 0.8500 - 0.9000 range holding. Sturgeon's SNP fell short of achieving the high bar of a majority on its own in May, but with the Green Party, the Scottish Party does have a majority who want independence. Sturgeon remains defiant. She wants another referendum. It could end up in the courts, but looking at history we note that GBP is not a major mover on campaigning for a fresh independence vote. It will likely only move on Scottish politics if and when a new vote date is near. Even then, the outcome seemingly remains a coin-toss. Meanwhile, despite Brexit agreements, intermittent political spats between the EU and UK seem inevitable with possible legal action over the Northern Ireland protocol simmering in the background still. In May, UK PM Johnson sent Royal Navy vessels to the waters around Jersey amid a mooted blockade by French fishing boats off the port of St Helier, Jersey's main entry point for supplies. France retaliated by threatening to cut power to Jersey, with the British province importing 95% of its electricity from Paris. We expect some positive EUR/GBP catch-up towards the range's topside extreme in the coming months thanks to progress on the EU recovery fund and vaccine rollout amid the feeling we have passed peak divergence with the UK on administering jabs. 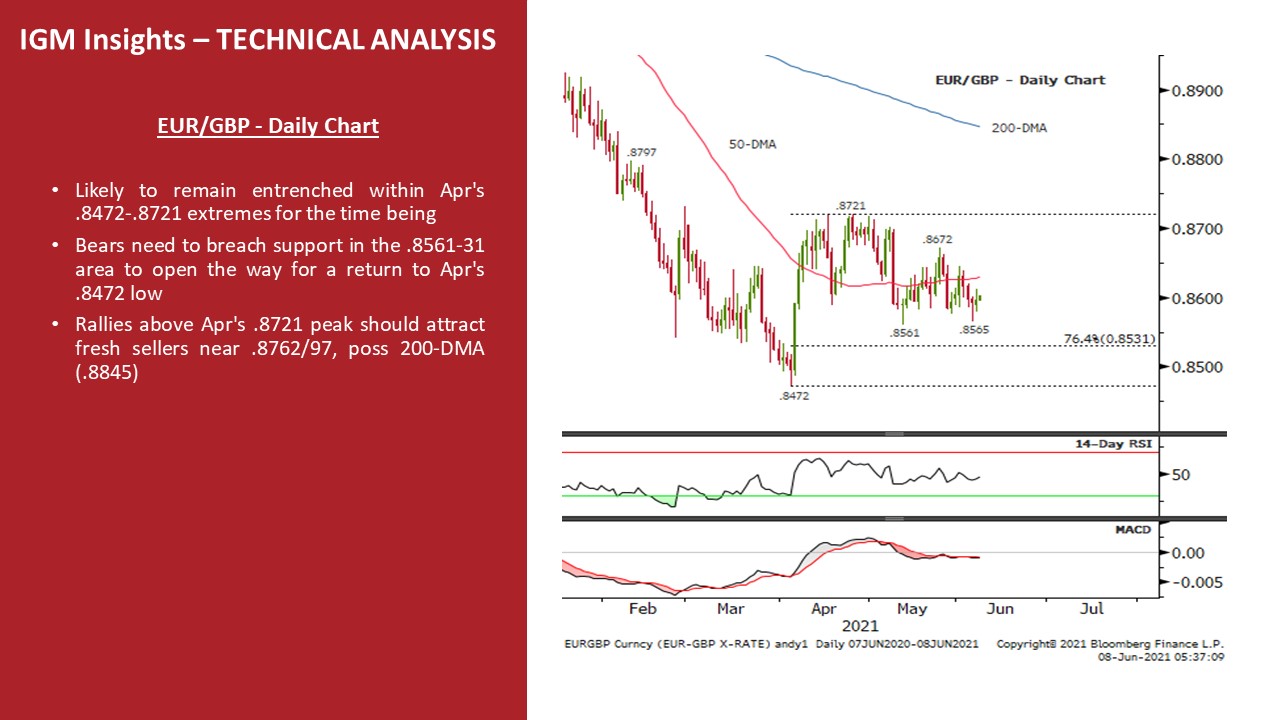