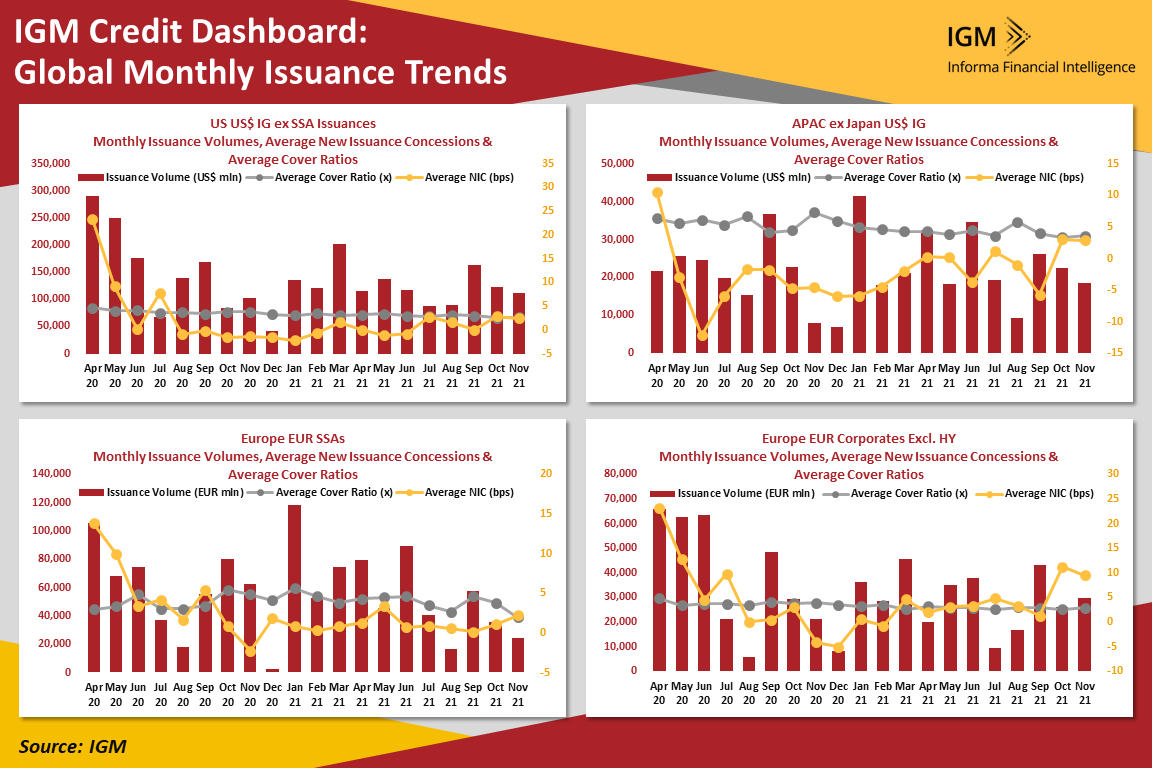 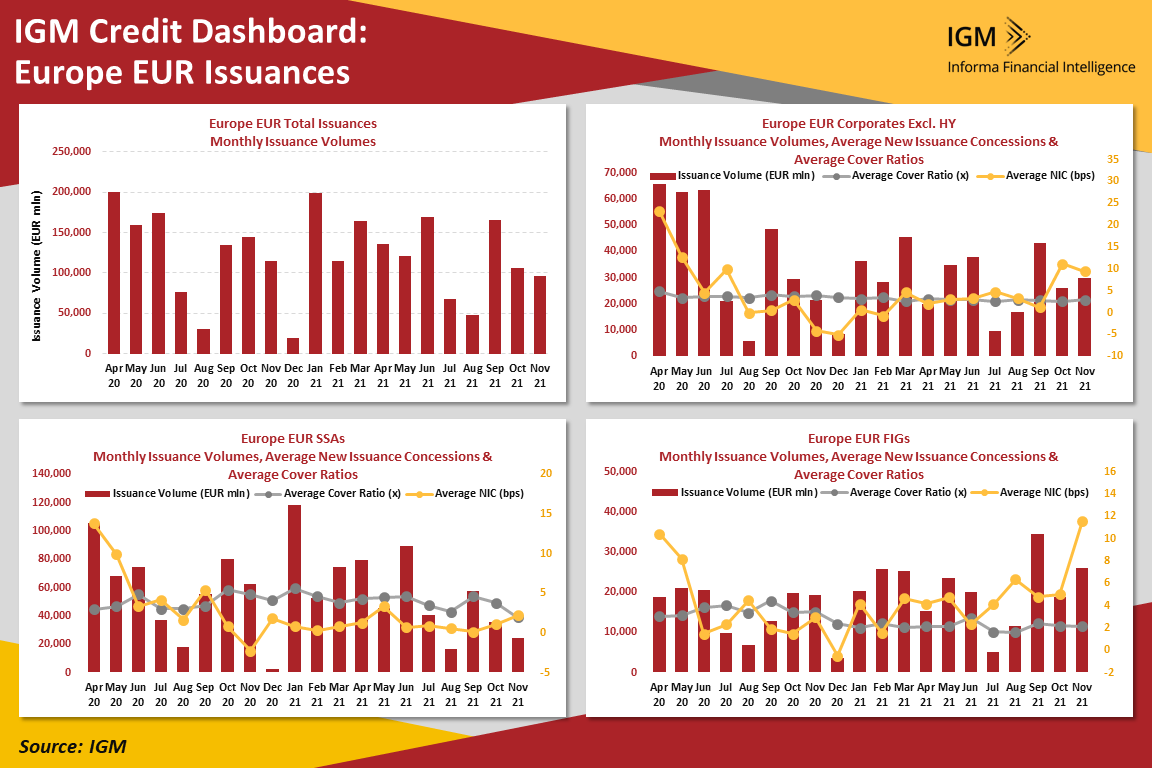 Total EUR supply eased for a second month in November as SSA, covered and HY issuers stepped off the gas while high grade Corporate and unsecured FIG borrowers both raised activity as more companies emerged from blackout. Volatility rose and yields fell as Covid concerns came back to the fore during mid-November and the emergence of the new Omicron variant in the final week of the month also fuelled FTQ flows. Funding markets remained open for business throughout although some issuers were required to pay up in the more uncertain environment.

FIG (ex-covered): Issuers came out in force in the penultimate month of the year with November volume sufficient to lift 2021 volume above 2020’s full year total. Higher volatility saw investors force a greater degree of price discipline on issuers where average spread compression (from initial talk to reoffer) was the lowest seen all year while the average NIC was the highest. Investor resistance appeared to reach a crescendo in the third week of the month where six of the week's nine issuers were unable to price deals inside initial talk. It was another active month in the ESG space with 11 issuers pushing YTD volume of ethical debt further into record territory. Eight of those issuers opted for the well-established Green format, cementing the dominance of Green bonds in the asset class which currently account for 75% of all single currency ESG supply from unsecured FIG borrowers this year.

SSA: The month of November was a slow burner for EUR SSA new issuance with just over EUR24bn printed against a YTD monthly average of a whisker over EUR61bn. That took the run rate for the year to EUR635bn which is EUR82bn shy of last year’s tally for the same period. ESG related bonds accounted for 16 of the 28 deals or 51.4% of the volume with a preference for Green (10 deals) over Social (3 deals) and Sustainability (3 deals). In terms of popularity the standout deal came from the Auckland Council whose 10yr Green received a EUR3.5bn order book, covering the EUR500m deal by 7x and enabling them to cut 7bps from IPTs to reoffer. Also noteworthy, we saw significant interest in a multi-tranche issue from The Ministry of Finance of the People’s Republic of China where order books covered each of the 3yr, 7yr and 12yr tranches by over 4x with a total of EUR4bn raised.

HY (Corporate): For the sixth time this year monthly HY-rated corporate issuance in the single currency topped EUR10bn as year to date total stretched further ahead of the previous busiest year. Almost two thirds of the November total came in the first week of the month as issuers found a sweet spot between the October wobble and November sell off to register the busiest week of 2021. Not only was that the busiest week of the year for EUR corporate HY, it was the busiest week ever for SLB issuance below the BBB- line. That also powered the busiest month for EUR HY SLB issuance, with two thirds of all high yield paper issued in the month have pricing mechanisms linked to sustainability. However, worries over inflation and later the Omicron variant took their toll on risk appetite with November registering the lowest average IPT-to-priced movement this year and Phoenix Pharma postponing its EUR 5yr at the end of the month.

Covered: The month saw a sharp slowdown and third lowest total of the year but November’s EUR5.75bn was enough to push YTD supply to EUR97.45bn and past 2020’s full year total of EUR95.85bn. The bulk of November’s supply came in the final full week of the month, as the weaker tone provide scope for more defensive issuance to secure the attention of investors. In contrast to unsecured FIG, average cover ratios rose and NICs fell. 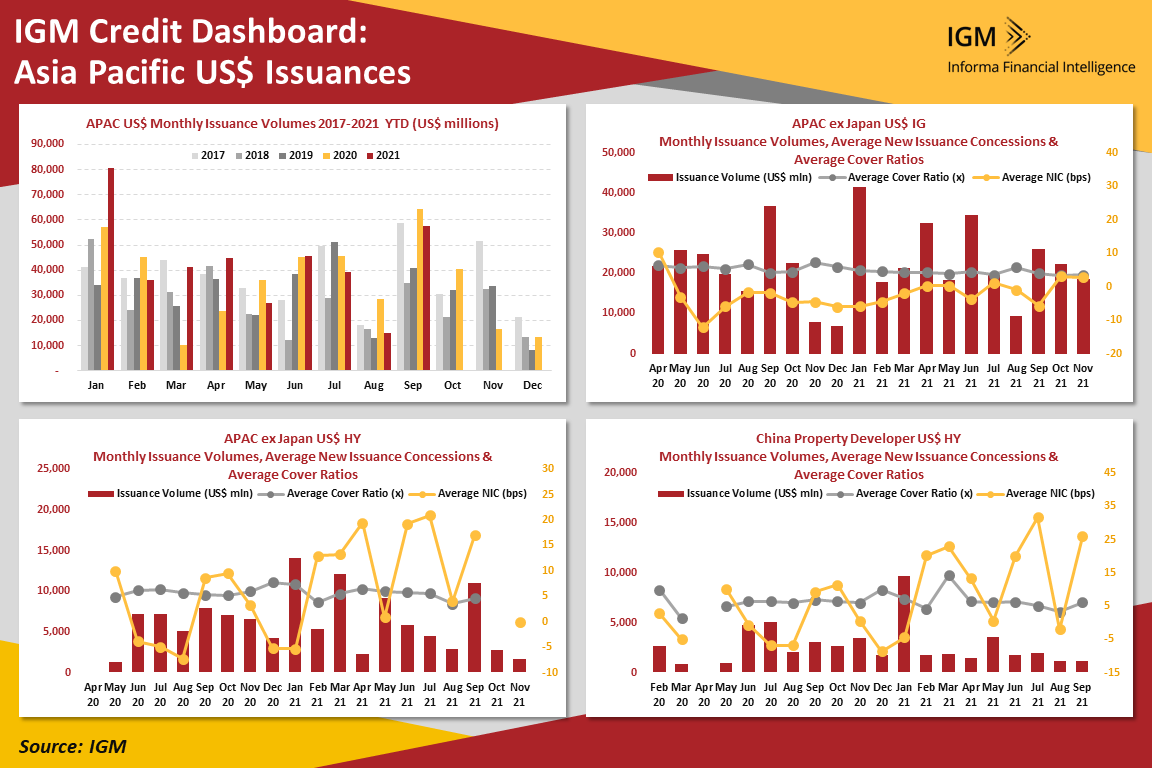 The APAC US$ primary market struggled to gain momentum in November, with issuance slowing further, weighed by the ongoing fallout from the Chinese property sector's woes as well as broader market volatility over the month, stemming from renewed Covid and Fed taper concerns. Investment grade names overwhelmingly dominated, taking advantage of pockets of opportunity in the middle of the month to refinance, whilst high yield issuers were kept well at bay.

Total USD denominated issuance in Asia Pac fell to USD23.97bn from USD29.40bn in October, in the second slowest month of this year after August but was up 47% than last November's volume. Stripping out the contribution of Japanese issuers, USD20.19bn was issued, of which investment grade rated transactions accounted for USD18.59bn or 92% of that total.

Of the investment grade issues, Australia's Westpac broke a big bank bond drought with a whopper five tranche USD5.5bn SEC registered deal, that attracted a combined book of USD15.45bn and new issue concessions ranging from 0 to 9bps on the 20-year tranche. The week after, Westpac again hit the street again with a USD1.75bn 5yr covered bond deal. The latter and the 3yr tranche of the SEC deal were priced off SOFR (secured overnight financing rate) benchmark rate rather than LIBOR.

Sovereign issuer, Hong Kong (SAR China) also stood out by tapping the ESG space, with a green bond offering comprising a USD1bn 10yr tranche, a EUR1.25bn 5yr tranche, and a EUR500mn 20yr tranche. The entire offering of eurobonds and dollar-denominated debt was triple the size of the first USD1bn green bond sold in a bid to sharpen city’s edge as centre for sustainable finance.

The APAC high yield space in contrast continued to flounder with issuance cratering further to a mere USD1.6bn, in the lowest volume since May 2020. Only five issuers managed to make it over the line, of which four were Reg S refinancing deals from China in the 3yr bucket. The other HY issue from Indonesia's Medco Laurel Tree Pte. Ltd sold off to as low as mid-94 (around 7.99% yield) in debut after the offering was completed at reoffer price 98.376 (reoffer yield 7.25%).

Needless to say it was also another disastrous month for cash strapped Chinese high yield property developers, none of which managed to access the offshore market for the second month in a row. Issuance volume for the 11-months is now 38% lower than same time last year at USD24.417bn.

Looking ahead, PBOC's 50bps RRR cut announcement on December 6th and signs China's government is starting property curbs, has since lead to more accommodative conditions. In the background, Evergrande is also said to be forging ahead with a major debt restructuring of its offshore public bonds and private debt. With the improved sentiment in hand and given a number of China property developers and LGFVs have large maturities lined over the next 3-months, we thus wouldn’t be surprised to see a more active primary market in the lead up to Christmas compared to the last one. 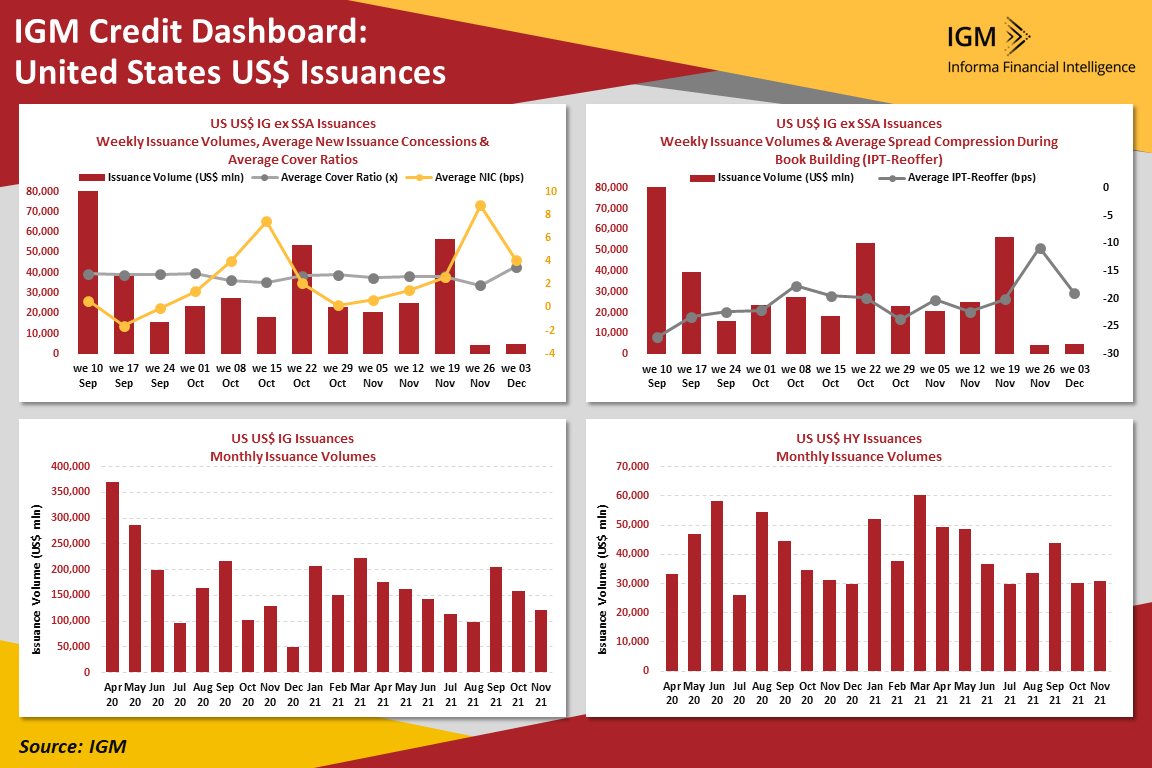 Overall US IG (SSA-inclusive) issuance in November eased but still came in at a solid pace, to top the USD 100bn mark for the third straight month at USD121.33bn versus USD157.74bn prior. Even if volumes pulled back, it marked the highest November month excluding last year's extraordinary performance since 2017.

SSAs went into hibernation with a mere 7 issuers tapping the market for USD9.85bn, in the second lowest volume this year after the August lull of USD8.36bn. This left the bulk of the month to be dominated by non-SSA names.

In fact November produced USD111.485bn in US IG ex-SSA issuance, surpassing the highest monthly estimate of USD110bn, and making November 2021 the busiest November since USD118.229bn priced in November of 2017, and the fourth busiest November on record.

The deals that made it to market did so with an improved average compression from IPT/PX of 20.2bp, 0.15bp more than the previous month; an average oversubscription rate of 2.68x, 0.12x more than October; and an average NIC of 2.39bp, 0.47bp less from last month.

Looking ahead, on average, the Street is looking for ex-SSA issuance of USD39.9bn to print in December, with guesses ranging from a low of USD25bn, to a high of USD50bn. As for overall issuance, the average estimate cam in at USD50bn, with a range from USD42.5bn to USD55bn.