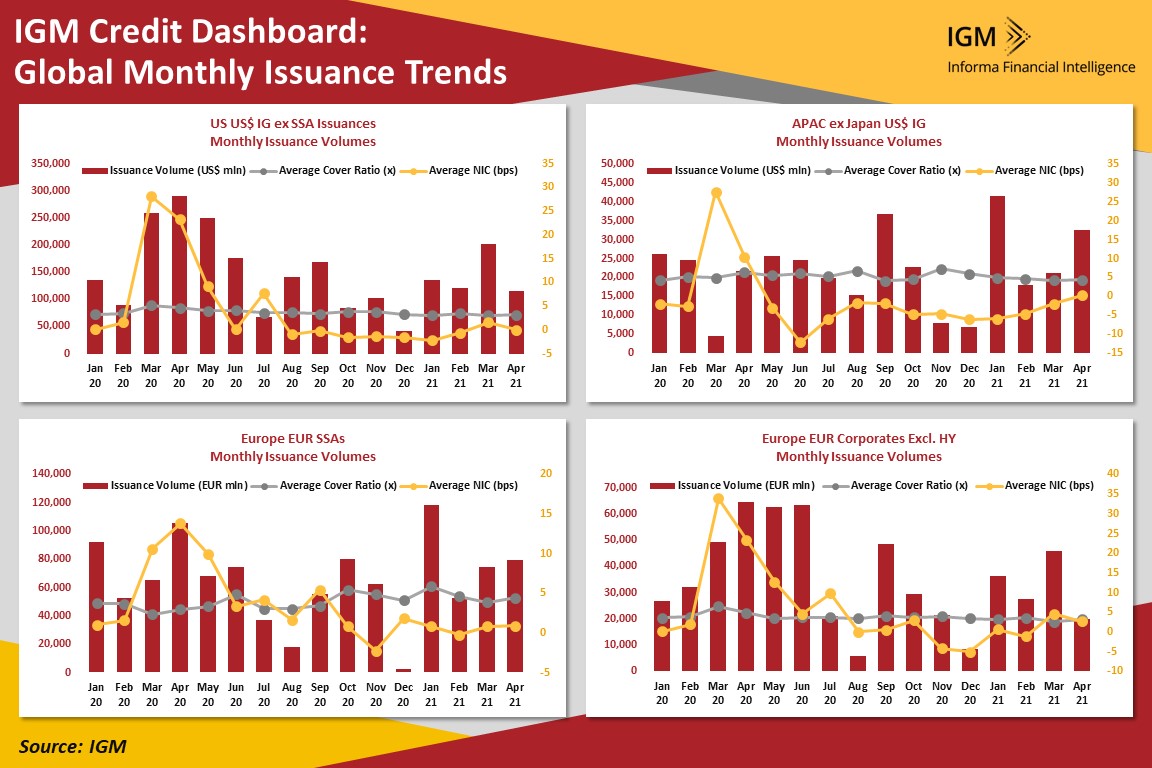 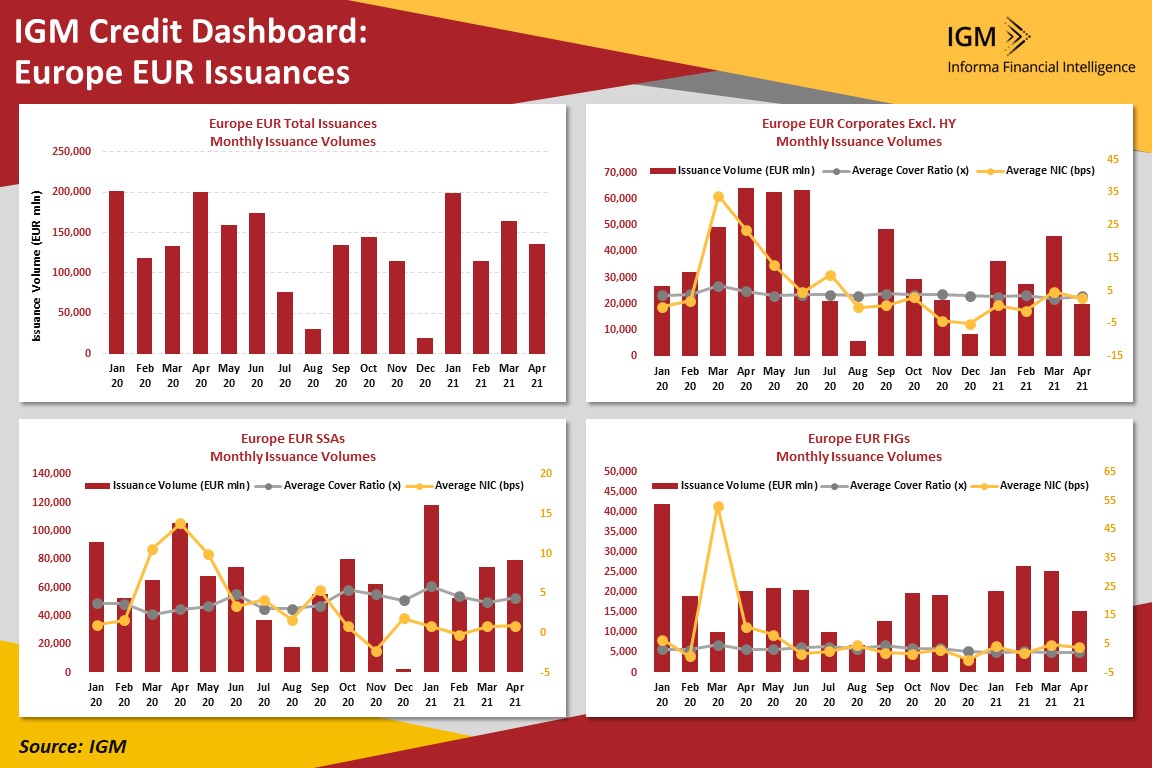 The overall pace of supply eased in the European credit market in April as financial and corporate issuers fell into earnings enforced blackout. Easter holidays also cut into the available window with issuers raising EUR135.627bn (down 17.4% on March) via single currency debt (all asset classes/ratings). That came in a month where investors generally remained receptive despite rising rates in Europe and attention also fell on the ECB which dismissed taper talk as premature. The deceleration also came after the busiest Q1 ever.

Corps (ex HY): Volumes more than halved versus March but the month was far from without its highlights. An M&A deal from Coca-Cola European Partners (EUR3.25bn 4/8/12/20yr four-part) represented the second largest euro corporate offering of the year, attracting strong demand above EUR7.4bn. With shrinking supply and robust demand came falling NICs and rising covers. In the ESG space, IG corporate borrowers sold the highest ever volume of Sustainability Linked Bonds in a single month while more SLBs are on the way in May with a rush of mandates announced in the opening week of the month.

SSA: Unaffected by earnings blackouts, SSA borrowers bucked the declining trend in April with several EU sovereigns including Portugal and Italy striking early in the month with jumbo deals, followed by mid-month by Spain. In the ESG space Andorra was among those to launch an inaugural Sustainability bond while BpiFrance issued a debut Green. EIB sold the world’s first digital bond using public blockchain technology and Province of Quebec priced its largest ever euro transaction

FIG: Rabobank beat its own record by pricing an AT1 with the lowest ever coupon at just 3.1%. Berlin Hyp became the first ever bank to sell a Sustainability Linked Bond. Towards the end of the month, US banks stepped in following earnings releases while self-led deals from European banks are expected to be the volume boosters in May as more banks emerge from blackout. Issuers will be hoping to find that the generally friendly conditions seen in April persist where NICs declined and sentiment toward the bloc’s banks improved, pushing European bank stocks to pandemic-era highs.

Covered: Longer duration deals were a notable feature in a month where volumes held broadly steady. Nationwide Building Society sold its longest ever UK covered bond (20yrs), and was among a number of issuers who achieved a keen price for longer dated debt in April, driving down the average NIC. Expectations are for supply in May to remain broadly in line with April which is also in line with redemptions for the month

HY (Corporate): A FOMO mindset that supported multiple-asset classes during April certainly appeared to permeate the European HY space which saw its highest volume month since October 2017. HY corporate borrowers were also active in the Sustainability Linked Bond market where Pfleiderer, Rexel and Lonza Specialty Chemicals became the 4th, 5th, and 6th issuers to print deals in the format. ZF Friedrichshafen, Mytilineos, Neinor Homes added to the year's green HY bond supply, all making for the highest ever monthly volume of ESG paper. 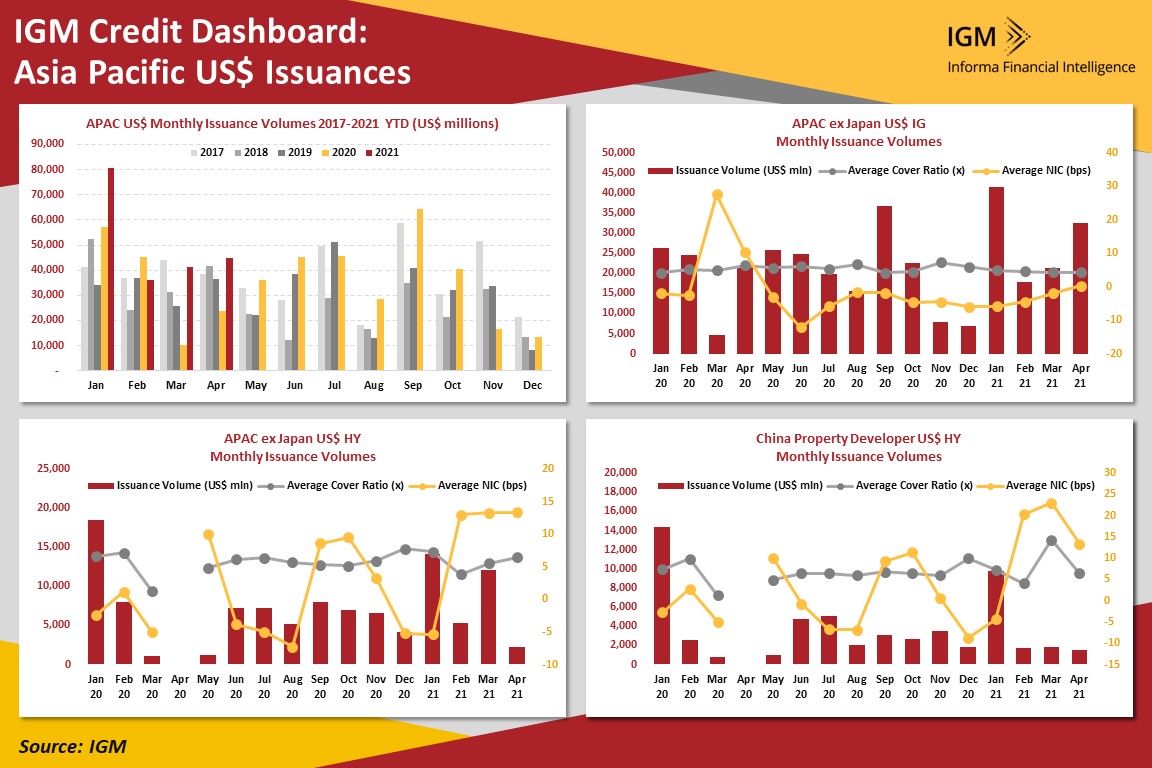 APAC US$ issuance volume closed out April at US$44.64bn (including Japan), in the second highest volume month this year after a record breaking US$80.589bn of supply priced in January 2021. April's total boasted the busiest April on record and smashed the US$23.735bn which made it over the line in the same month last year. This was encouraging given it coincided with heightened volatility in the secondary cash credit market as increasingly cautious investors were forced to digest a range of negative headlines.

APAC Investment grade issuers (excluding Japan) however largely refused to be deterred by any weakness in funding market conditions, with April's issuance volume rising to US$32.1bn, underpinned by some jumbo international transactions from a spate of large Asian corporations already familiar with investors.

Majority of order books on investment grade deals were comfortably oversubscribed, as illustrated by the healthy average cover ratio at ca. 5.0x. That said issuers did not have it all their own way as highlighted by the average new issue concession which edged up marginally back into positive territory for the first time since April 2020, albeit still at a very economic level for issuers.

APAC high yield issuance: While high grade APAC issuance volume bounced back in April 2021, the same cannot be said for regional high yield supply, which slumped to a paltry US$2.277bn. This represented the lowest volume month since May 2020 when most higher beta issuers were still locked out of the primary US$ market due to the pandemic. It is also a far cry from the record breaking US$14.122bn of high yield paper which hit the market in January 2021.

What is also notable is that those issuers which did make it over the line were also forced to pay up for the privilege as outlined by the average new issue concession which has remained consistently high at just below 15bp on average in recent months, having jumped sharply from ca. -6bp (negative) in January 2021 despite such robust issuance volume.

While this can probably be attributed to various factors, such as a slide in supply from Indian borrowers amid a renewed spike in Covid cases in the country, there is no doubt that a sharp decline in offshore issuance from historically prolific Chinese property developers, has been the catalyst for the sharp fall in overall high yield supply, not just in April 2021, but also since early February.

Continuing to be weighed by the failure of China Fortune Land to meet its obligations on a US$530m bond earlier in the year and policy makers push to curb debt risks within the property sector, offshore issuance from Chinese high yield property developers amounted to just US$1.497bn in April 2020, barely changed from the prior two months, and substantially down on the US$9.722bn that the sector produced in January 2021. 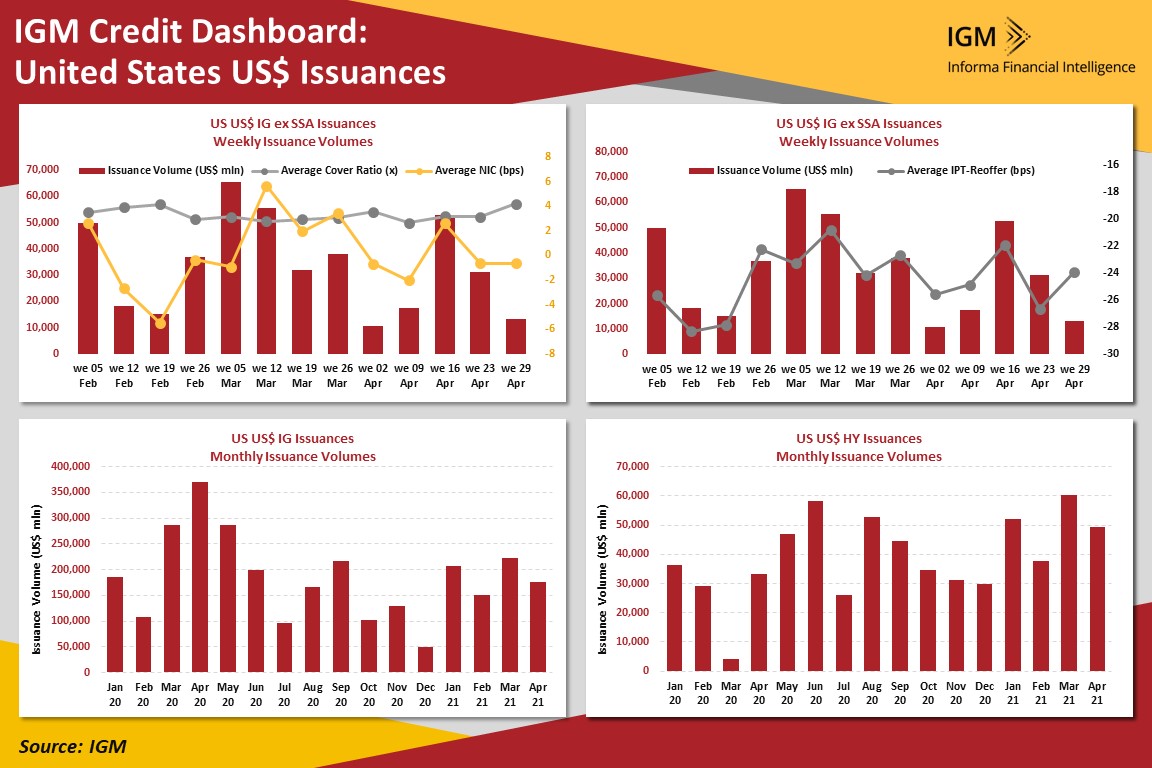 Overall US IG (SSA-inclusive) issuance eased to US$175.78bn in April after topping an impressive US$200bn in March. That said it still ranked as the second busiest overall issuance April on record behind last year's unheard of US$370.175bn.

April's IG issuance volume also topped all overall monthly estimates for the month, including the highest estimate of US$135bn, as more and more sovereigns and their related agencies, as well as supranationals, continued to raise capital in an effort to combat the persistent spread of the virus and further their “green" projects. In fact, SSA issuance in the US recovered to represent 34.6% of total monthly IG issuance or US$60.86bn, from March's 8.7% and on par with January's percentage. Of April's SSA issuance, biggest deal was IBRD's US$8bn 2 tranche global sustainability bonds.

US IG EX SSA: With 68 borrowers raising US$114.92bln, April turned out to be the third most prolific ex-SSA issuance April on record. The month was both helped and hampered by earnings season. Whereas five of the “big six" banks contributed mightily to April's total - US$47.675bln, or nearly 42% - the absence of corporate borrowers was a bit of a surprise.

Uncharacteristically, only 10 corporates elected to tap the market in April contributing a paltry US$14.35bln (12%) to the bottom line. That compares with a 56% share of last year's April volume, but more realistically to a 19% share of April 2019's final tally. That list included Coca Cola ($3.45bln) and Procter & Gamble ($2bln).

Technicals continued to point to continued demand for new paper, for the vast majority of investment-grade ex SSA rated issuers, who still enjoy a captive investor base keen on quality and positive yields. The average new issue concession for the month in fact slipped back into negative territory to c.a -0.01bp (negative) after widening to 1.63bp (positive) in March, whilst the average coverage ratio remains above 3.00x and the spread compression during book building around -24bp on average.

Looking ahead, a pick-up in issuance momentum is around the corner it would seem from early indications that suggest we could be looking at ex-SSA issuance volume of as much as $140bln in May. In particular, with big tech companies like Apple, Microsoft and Amazon recently reporting earnings, we would expect a visit from them, with Apple having been known to tap the market in May in three of the last five years.

US High Yield: Riskier assets also had a busy April with the high yield primary market seeing seventy-three (73) tranches priced, totaling US$49.2bn in volume, the fifth busiest month on record, and a record for the month of April. Year-to-date, high yield issuance stands at US$196.985bln, nearly double the amount ($101.46bln) priced at this time last year.