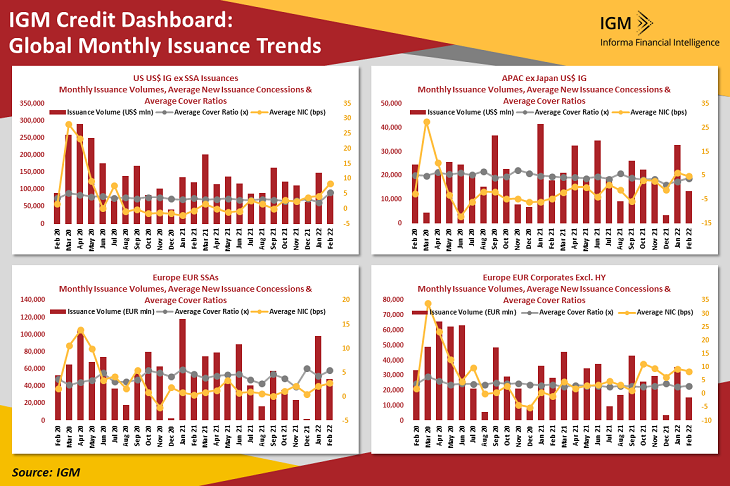 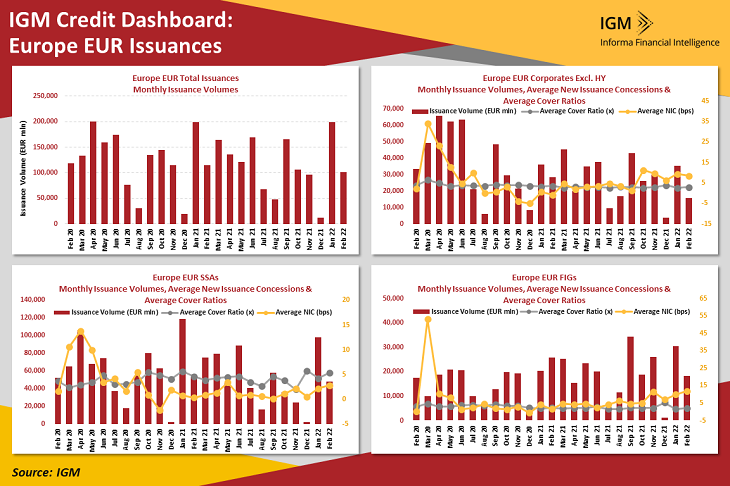 Total EUR supply almost halved to follow the traditionally busier month of Jan with activity slowing sharply across all asset classes. SSAs experienced the biggest absolute drop in activity (down EUR50bn on the month) while Corporates (ex-HY) saw the biggest percentage drop compared to Jan (-56%). Slowing supply came as volatility rose, record euro-area inflation heaped more pressure on the ECB to wind back stimulus, and long term core yields hit a series of multi-year highs. This was all before Russia’s invasion of Ukraine drove a flight to quality and shuttered primary markets in the final few days of the month.

SSA: Feb SSA issuance is historically much lower than in Jan and this year proved no different with a total EUR tally of EUR48.05bn a full EUR50bn lower than January’s total. Coverage ratios for the month hit 5.42x (not far behind the highest monthly average since 2020 of 5.80x) boosted significantly by bumper order books on deals from KfW, EIB, ESM and of course the EU. These 4 names alone issued a combined EUR17.2bn over 5 lines with total orders in excess of a whopping EUR209bn. Sovereign action was confined largely to non-core issuers via deals from Italy, Spain, Slovenia, Andorra and Belgium. ESG related deals remained largely absent with just EUR3.8bn pricing across four deals.

Corporates (ex-HY): It was a stop-start month for European IG corporate bond activity with earnings, ongoing inflation worries, rising potential of the withdrawal of central bond support and then Russia’s invasion of Ukraine all impacting sentiment. Euro supply for the month finished up at just EUR15.545bn to mark the slowest Feb for the asset class since 2018 and a big decrease from Jan’s EUR35.450bn. Amid ongoing volatility in adjacent markets, the average NIC paid by Feb’s issuers remained elevated at 8.43bps (9.37bps in Jan), whilst all-in costs jumped after secondary spreads maintained a widening basis throughout the month. In contrast to recent times, ESG debt was thin on the ground with just one borrower issuing a Green bond in the form of Terna (EUR1bn PNC6 Hybrid). That came after ESG trades accounted for 41.62% (EUR14.75bn) of Jan’s overall corporate haul.

FIG (ex-covered): Volumes in the unsecured FIG market witnessed the smallest relative decline of any asset class in Feb (-40% vs January) but rising investor resistance showed in higher premiums compared to existing paper. Average NICs rose for a second successive month to the highest since March 2020 when the virus violently upended markets, while fundraising in riskier debt remained low. Just one issuer (BFCM) bought subordinated euro paper in February where its EUR500m Tier 2 sale left YTD supply via subordinated paper at just 6.7% of the overall 2022 total vs 17.6% in the whole of 2021. The bulk of Feb’s supply from banks came in Senior Non-Preferred or HoldCo format (62.7%) with Senior Preferred and OpCo paper accounting for 34.3% of new supply.

Covered: Feb’s euro issuance borrowed some momentum from the previous month and EUR16bn was sold across 18 tranches to mark the most active Feb for the asset class in six years. The volumes more than covered the month’s EUR8.3bn scheduled redemptions leaving the sector running ahead of YTD redemptions by EUR3.4bn. Issuers favoured 5- and 7yr tenors during the month with the average maturity falling to 7yrs (from ~9yr in January). This generated an impressive investor response, and the month produced the second- and fourth-largest orderbooks so far this year. On aggregate, more than EUR30bn worth of orders were placed in Feb with bonds 2.1x covered on average. This allowed issuers to trim talk by an average of 3.5bps to pay a 2.59bp average NIC.

HY (Corporate): Primary market activity in the European high yield market only lasted 10 days in Feb as a market that had already been struggling under the strains of runaway inflation and central bank tightening concerns closed completely in the face of extreme geopolitical events in Ukraine.

Prior to the shutdown, some EUR3.29bn of paper printed, a total which (like Jan) was a little over half what it was 12 months ago. Also, like Jan, inflation worries and the fear of swifter and stronger central bank tightening were evident, with 51.7% of the month’s issuance in floating rate. Cerved, which offered a choice of fixed and floating, took over ¾ of its EUR1.4bn in FRN format while Covis dropped plans to tap the EUR HY bond market in favour of TLBs. However, the FRN format could not save AnaCap’s EUR350m 5.5yr senior secured note which was pulled from the market the day after Cerved priced. The HY market subsequently laid dormant for the remainder of the month with the extreme volatility generated by the war in Ukraine keeping issuers on the side lines. 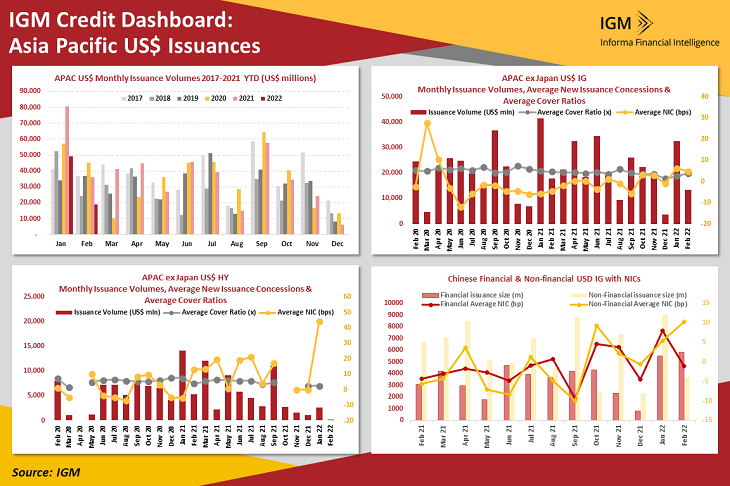 APAC primary market momentum slowed down significantly in February 2022 as a raft of negative headwinds kept many APAC US$ issuers on the sidelines.

That limited APAC US$ issuance volume to just US$18.79bn during the month (incl. Japan), down 61.8% from the US$49.2bn which priced the previous month of January, while also marking the lowest volume month of February in over six years.

February 2022 was always going to start at a measured pace due to the Chinese Lunar New Year break in the early part of the month. However, the pace of issuance struggled to recover in the weeks that followed, consistent with elevated volatility in broader stock and underlying bond markets.

That was largely attributed to the prospect of more aggressive US monetary policy against a backdrop of ballooning inflation, along with heightened geopolitical tensions in the lead up to Russia's eventual invasion of Ukraine. That served to keep the window of opportunity closed to many regional issuers as the month progressed, compounded by ongoing contagion from the latest flow of negative news from the distressed Chinese property sector.

The latter continued to weigh on Chinese high yield issuance in particular, a familiar trend that has been in place for some months. That is reflected by the paucity of APAC US$ high yield deals which amounted to a meagre US$217m in February, equating to just 1.15% of the total raised.

Regional investment grade issues thus maintained their dominance in February with a contribution of US$17.32bn or 92.2% of the monthly total, with unrated transactions chipping in the balance of US$1.253bn. Meanwhile, stripping out the contribution of Japanese issuers to February's APAC US$ total saw the month produce US$14.89bn of issuance, with investment grade transactions accounting for US$13.42bn or 90.1% of that sum.

That as those high-grade issuers which did decide to navigate their way through a frequently challenging market backdrop, apparently took the view that the most economic strategy is to lock-in funding while they have the chance before borrowing costs rise further in future.

They were still forced to accommodate increasingly selective investor's demands for more spread compensation to offset any execution risk, however. That is illustrated by the average new issue concession (NIC) paid by non-Japanese APAC investment grade issuers which came in at ca. 5bp in February, broadly in line with the aggregate 6bp NIC on offer the previous month.

Those eye-catching concessions paid by APAC high grade dollar issuers in the first two months of this year are the highest since April 2020, when the regional primary market was still in recovery mode following the initial wave of the Covid pandemic.

And those concessions would have been even higher in February had it not been for a notably more encouraging month for Chinese financial investment grade issuers. Not only did they manage to buck the broader trend of inflated concessions but did so by securing competitive funding costs inside fair value on aggregate despite the often arduous conditions, albeit underpinned by demand from the JLMs which is fairly common for a Chinese offshore bank bond.

Chinese financial borrowers paid an average new issue concession of -1bp (negative) for their combined US$5.8bn of 2, 3 and 5-year mix of conventional and sustainable senior unsecured issuance in February, which also boasts the highest volume month for Chinese investment grade financial supply since January 2021. That compared to an average concession of 10bp paid by Chinese non-financial high-grade names which priced US$3.72bn between them in February. 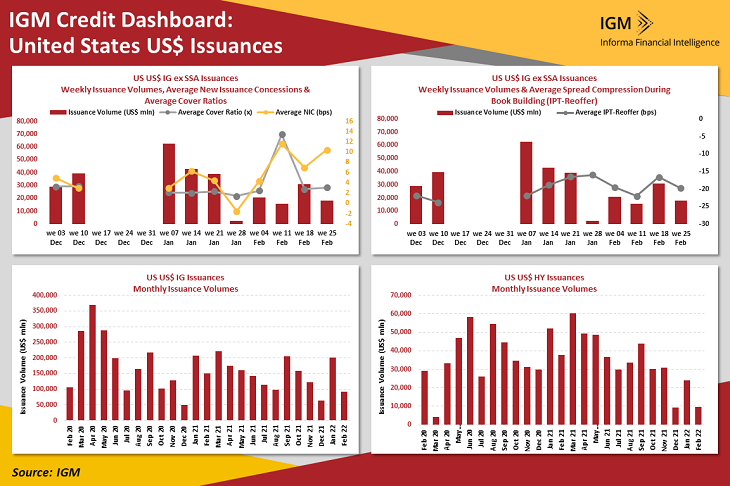 February issuance fell short of Street expectations. Coming into the month, the Street was looking for, on average, US$98bn in ex-SSA issuance to cross the tape, with the estimates ranging from a low of US$75bn, to a high of US$111bn. With the final tally coming in at US$83.1bn, last month (1) failed to match or exceed the average Street estimate for only the second time in the last 14 months (2) made last month the slowest ex-SSA issuance month since October of 2020, when US$83.0bn was priced.

The instability, uncertainty and volatility in the broader markets also took a toll on issuance statistics as well. While the 55 deals (105 tranches) priced with an average contraction from IPT/PX of -19.45bp, which was in line with (1) January's average -19.66bp compression, and the year-to-date average of -19.55bp, this was much narrower than 2021's average contraction of -23.2bp.

As for investor interest, which appears to have been influenced by the lack of issuance, the average oversubscription rate for deals priced jumped to 5.35x, more than double the 2.13x cover of January, when US$148.841bn came to market. The coverage ratio also firmly topped the year-to-date average rate of 2.5x and last year's 3.04x coverage.

There are some who believe the high grade new issuance market is going to have to learn to walk before it can run. “The next brace of high grade deals may have to be smaller sized and marketed more defensively as investors look to buy bonds on the cheap," suggested one banker. He added, “After one or two of these types of deals, investors will start getting greedy and jump in for bigger size, and then I think we will gradually start to move back to a process of IPT/PX tightening and good oversubscription rates and then we start to get back to our new normal (whatever that may be as long as this Russian/Ukraine conflict lasts)."

Already at elevated levels, there are those who believe NICs are destined to go even higher. “The longer this geopolitical situation persists, we could be looking at concessions that are easily 20-30bp higher, perhaps even more. That prospect, in and of itself, could prompt more borrowers into the market sooner rather than later regardless of the broader market backdrop.”

Be that as it may, the less than expected issuance of February was fairly evenly split between industrial/corporate (40%) and FIGs (41%), both domestic and foreign. The remaining 20% was made up equally of utility borrowers and SSA issuers. Single-A borrowers made up 45% of February's issuance, followed by BBB-rated issuance with a 34% share. The remaining 21% could be attributed to AA-rated issuance. Once again, the 5 to 19-year range was the tenor of choice, accounting for 56% of all of February's issuance, followed by 20-plus offerings (24%) and less than 5-year or shorter deals (20%).

Looking Ahead, despite the rather anemic issuance showing in February, or maybe because of it, the Street appears to be rather optimistic when it comes to issuance for March, a month that is historically one of the busiest issuance months of the year. Over the past decade, the month of March ranks at the second busiest ex-SSA issuance month of any year.