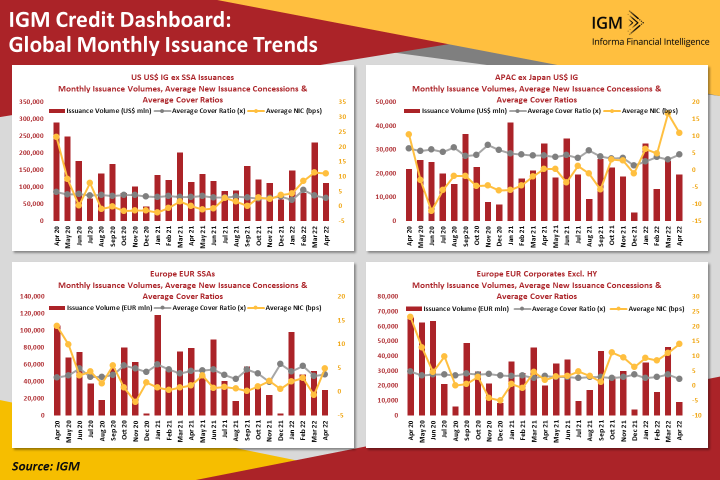 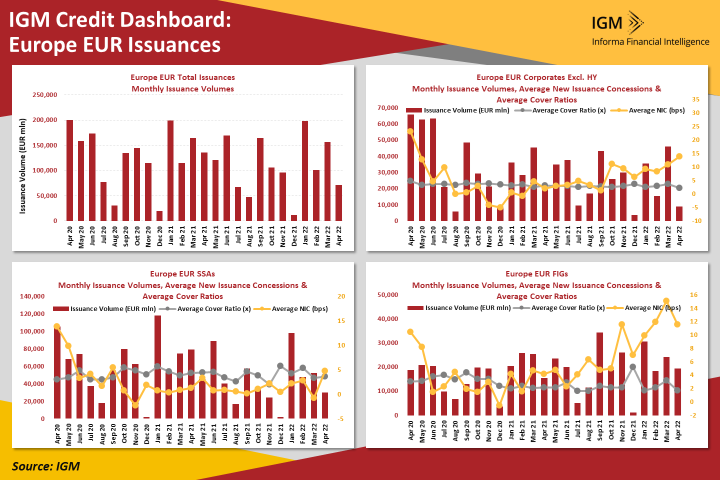 ** Overall EUR supply more than halved in April (down 54% vs March) as underlying yields continued rising and credit spreads widened in the face of heightened inflation risks as war in Ukraine raged on. There were new risks to negotiate too as the French Presidential election brought with it concerns over the cohesion of the eurozone itself. The issuance window was further narrowed by Easter holidays. All high-grade asset classes slowed while the IG corporate market was most heavily impacted. FIG volumes held up comparatively well in the rising rate environment and amid expectations that volatility would prove conducive for trading revenues among banks.

** IG Corporates (ex-HY): Sharply lower volumes, rising NICs and falling cover ratios characterised a challenging month for the high-grade corporate market during which investors demanded higher premiums to compensate for the elevated risks. The average NIC rose to its highest level in two years while the average cover ratio was comfortably the lowest seen this year. The approach of earnings season and associated blackout periods also crimped activity in what marked the slowest April for the asset class since 2017.

** Covered: A record-breaking March was followed by a much slower April when just EUR12.6bn priced across 18 lines - a 62% fall month-on-month - making it the year’s slowest month thus far. Despite this, after several weeks of short-dated supply issuers finally ventured out on their curves to bring ten- and 12yr paper (April’s average tenor was ~6.6yr with March’s falling to ~4.8yr). Also notable during the month was the presence of Austrian issuers – six in total who brought EUR2.85bn. For context, between Jan and March seven Austrian borrowers raised EUR3.1bn.

** FIG (ex-covered): A volatile backdrop necessitated a nimble approach by issuers, but investors proved willing to underwrite new unsecured debt offerings with smaller concessions during April. There were some clear signs of caution though where coverage ratios almost halved compared to March while subordinated sales stayed low and were limited to just the first four business days of the month.

** SSA: The slowest month of the year so far saw just EUR29.8bn being placed over 18 transactions. In recent years April has been a robust issuance month, typified by the bumper pandemic related issuance witnessed in 2020. Only 2 sovereigns came to the market for syndicated issuance (Portugal and Croatia), and both paid healthy NICs (10bp and 20bp respectively) to get deals away. The larger, more regular issuers (KfW, EIB, EU) were all present, and all in green format, which helped the month’s ESG issuance to 66% of total volumes. A welcome boost since ESG volumes have been lagging way behind 2021 levels.

** HY (Corporate): April saw the first fresh EUR HY deal since Cerved’s two-parter on 10th Feb, but only just. Miller Homes left it late, very late, as it priced its GBP815m equiv GBP and EUR dual tranche deal in the final session of the month, but it had to offer enhanced pricing to get the deal away. And while Miller Homes meant another blank month was avoided, the comparison with April 21 (the second busiest month post-pandemic) showed an almost EUR12bn year on year drop in volumes as volatility, rising yields, and the heavy issuance volumes in 2020 and 2021 all affected issuers’ motivation to tap the market. 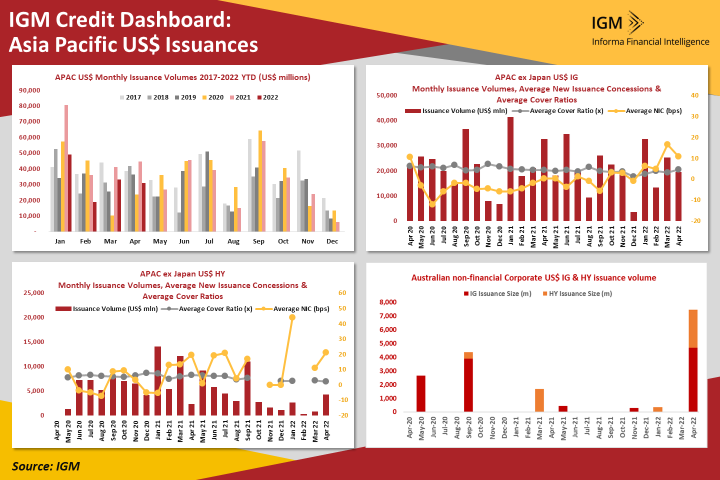 Adverse market conditions continued to challenge regional issuers in April 2022, which were once again often forced to steer their way through acute broader market volatility amid a raft of debilitating influences.

That included economic slowdown and pipeline disruption fears amid China's latest Covid-19 lock-downs, expectations of aggressive US monetary policy tightening to curb ballooning inflation, some downbeat US heavyweight tech earnings/outlooks and ongoing anxiety surrounding the potential impact on commodity supplies/prices from the war in Ukraine.

The USD30.867bn of APAC USD supply (incl. Japan) which did manage to get over the line in April was therefore still a decent achievement under the circumstances, despite falling slightly short of the USD33.085bn which priced the previous month of March and coming in well below the USD44.64bn which was placed in April 2021. That was also compounded by some regional holidays during the month including the China Ming festival and the long Easter weekend.

One encouraging trend of note in April was a jump in APAC USD high yield issuance to USD4.3bn or close to 14% of the overall monthly total (incl. Japan). That was underpinned by a brace of Australian borrowers in the shape of iron ore company FMG Resources (Fortescue Metals Group) and mining services company Mineral Resources Limited, which raised USD2.75bn in 144A/RegS format between them, equating to ca. 64% of the monthly HY total.

That exceeded the amount of regional high yield issuance throughout the whole of Q1 2022 (USD3.592bn) and boasted the highest month for regional HY supply since September 2021, as contagion from the distressed Chinese property sector had largely kept a lid on issuance in the interim.

Having said that, it was investment grade supply which continued to dominate overall APAC USD issuance volume in April 2022, coming in at USD24.865bn (incl. Japan) or USD19.465bn when stripping out the contribution of Japanese issuers.

That as a fresh host of issuers appeared to take the view that the most economic funding strategy is to seize upon any window of opportunity that presents itself now, rather than later when funding costs inevitably increase further in line with higher US interest rates.

Once again, the Australian corporate sector played a significant role in the investment grade total in April thanks to protein-based biotechnology and vaccine provider CSL Finance and mining and metals group South32.

The pair placed a combined USD4.7bn of 144A/RegS supply or ca. 19% of the overall IG total (incl. Japan), largely thanks to CSL which made its debut in the public USD market with a well-received jumbo M&A driven USD4bn 6-part 144A/RegS exercise.

Meanwhile, the testing market conditions were once again highlighted by the eye-catching spread compensation that regional investment grade issuers were forced to pay to persuade cautious investors to part with their cash. 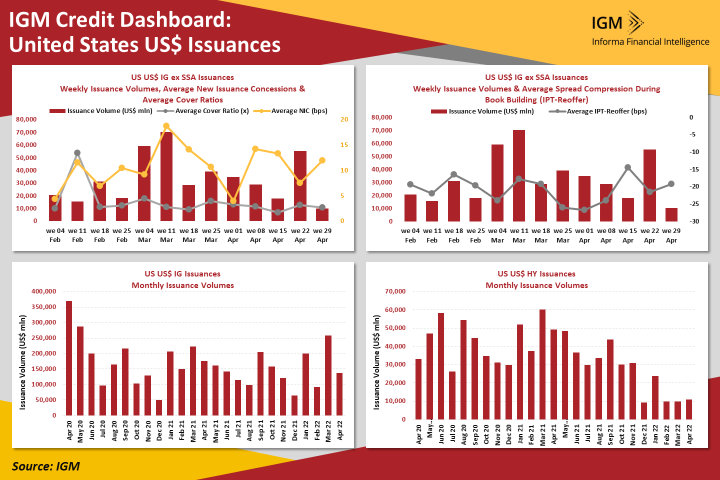 The bulk of issuance for the month came from the domestic FIG sector (USD55.45bn or 41%), with four of the “big six" banks making up USD33bn of that total. Yankee FIGS (USD16.85bn or 12%) also contributed handily to the combined FIG total. Domestic industrial/corporate issuance tailed off a bit in April, accounting for 23% of the month's total, compared to a 30% share of March's USD231.9bn. Yankee industrial/corporate issuance fell in April from an 11% share last month to just 4% in April.

Despite the rise in interest rates – the benchmark 10yr note yield rose by 53bp since the beginning of the month – floating rate issuance declined 73% from the previous month, with five FRN tranches dropped at launch. Floating rate notes are the security investors tend to gravitate to when they believe rates are on the upswing.

Despite relative softness in sustainable debt issuance so far in 2022 because of broader market conditions – ESG/SRI issuance totals USD57.566bn, or 10% of total issuance this year as compared to a 12.4% share last year - issuance remains on an upward trajectory in many key sectors.

It should be noted that the 50 issuers who tapped the market this month were forced to pay a price as investors became more selective, and price sensitive, during what was mostly a “risk-off" environment. The average trade compressed 20.1bp from IPT-reoffer; was 2.73x covered; and priced with an average NIC of 10.08bp. In comparison, deals priced in March contracted 23bp from IPT-reoffer; were 3.25x covered; though priced with an average NIC of 10.64bp.

Historically, May is one of the busier issuance months of the year. The month has averaged USD138.6bn over the past decade, ranking as the third busiest month of the year. Regarding FIG, keep in mind, we still haven't heard from either Citigroup and Goldman Sachs, while the other four “big six" banks followed earnings with trips to the market.