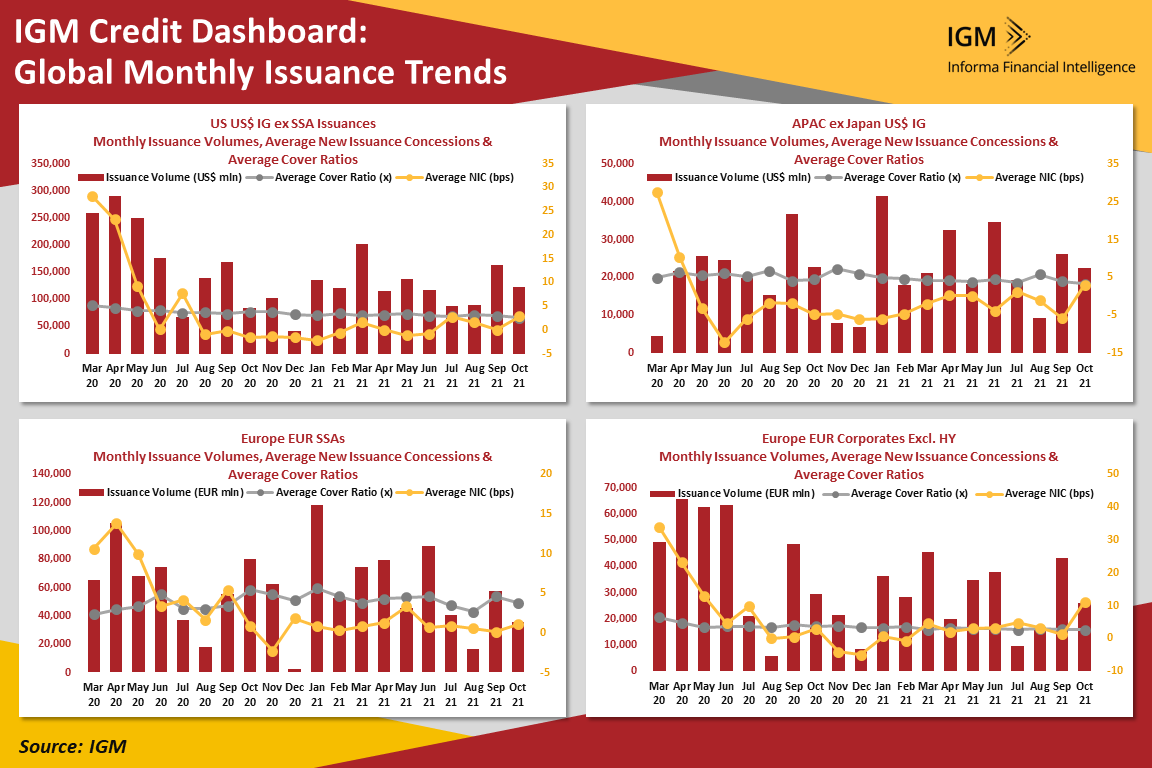 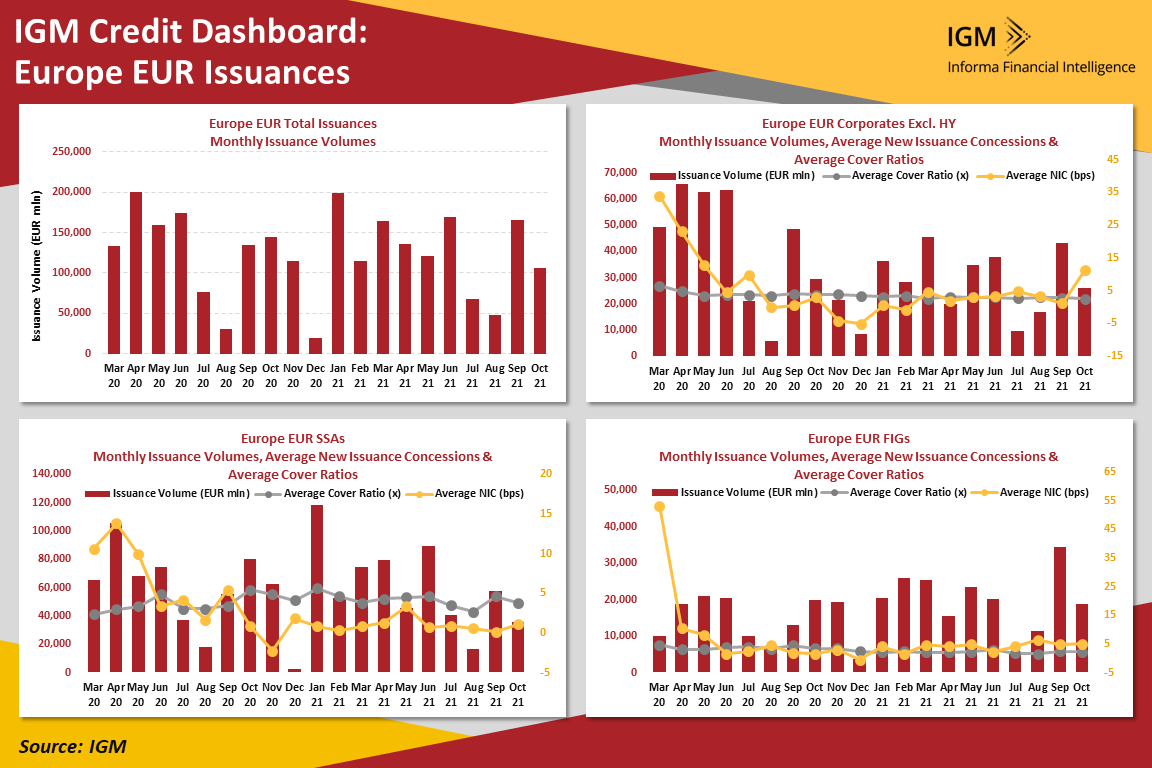 Issuers stepped off the gas in the European primary market in October as yields and inflation expectations continued to rise and markets moved to price in reduced support from central banks. All asset classes except HY contributed to the downswing with unsecured FIG issuers seeing the biggest percentage drop from an uncharacteristically active September which proved a tough act to follow. A cheaper rates complex saw the 10yr bund yield rise by 9.3bps on the month, adding to the 18.4bps increase in September while European stocks came roaring back with a 4.6% rally on Stoxx600 more than reversing Sep’s 3.4% decline.

Corporates (ex HY): Single currency supply fell considerably in October, with earnings updates and associated blackouts weighing on issuance levels after what was a typically bumper September (second busiest month of 2021). Noticeable in October was that NICs crept up (highest average YTD) and the average cover fell (second lowest YTD), which came amid broader volatility in underlying rates curves and with investors perhaps being a bit more discerning toward the end of another busy year. Standing out this month was US borrower Thermo Fisher Scientific which crossed the Atlantic to raise EUR5.2bn via an M&A-driven 4-part (9, 12, 20 & 30yr) in what marks the biggest euro IG corporate deal of 2021 so far. Elsewhere, there was another decent helping of ESG paper, with Nederlandse Gasunie, Hera SpA and Wesfarmers Limited the latest to offer up debut Sustainability-Linked Bonds.

HY (Corporate): October was the fifth EUR10bn+ month of the year as issuers made light of the broader volatility to print a wide range of M&A and refinancing trades. However, whereas September saw the vast majority of deals price at or inside the tight end of guidance, a far greater portion of issuers in the first half of October found themselves pricing flat to initial guidance or, in the case of Iliad, considerably outside. The French telecom firm had to find an extra 32.5bp and 42.5bp respectively (from mid IPTs), to clear its 5.125% Oct 26 and 5.625% Oct 28. Meanwhile, MasMovil (Lorca Telecom), which priced a huge EUR1.55bn tap of its 4% Sep 27 in the first week of the month, pulled a reprice of its TLB1 two weeks later citing market conditions.

While worries over climbing rates didn’t go away, in the second half of the month there was a more constructive backdrop supported by strong Q3 earnings. And, demonstrating that the hunt for yield hasn’t quite run out of legs just yet, PIK notes returned to the market as both Burger King France (EUR 7.75% Nov 27) and Together (GBP 6.75% Nov 27) both priced notes at the tight end of IPTs.

FIG (ex-covered): After September produced the biggest month of the year, the only way was down for FIG supply in October with earnings blackouts keeping some borrowers away. Demand metrics suggested a slight softening of conditions for issuers with the average cover ratio easing although that had little impact on new issue concessions with the average NIC holding broadly steady. There were anecdotal signs during October that lesser-known credits were finding investors less accommodating with ESG lender Triodos Bank forced to postpone a Green Tier 2 which subsequently resurfaced at a cheaper level while Slovak lender 365.bank also pulled a debut Senior Preferred line.

SSA: Lower supply from meant that just one trade provided over a third of October’s volume where the European Union’s debut NextGen Green Bond (EUR12bn 15yr) priced on a EUR135bn book. Also, in Green format, Italy tapped its 2045 Green BTP by EUR5bn on a 10x book with both trades highlighting the abundance of cash still looking for a home in liquid paper with an ethical tag.

Covered: Failed to buck the downward trend. However, the EUR13.8bn raised positioned October as the second busiest month of the year so far and was also well above the monthly YTD average seen this year at EUR8.66bn. It also meant that YTD volumes surpassed those seen in the same period in 2020 for the first time this year. Cover ratios eased for a second month but there was no discernible impact on NICs which eased slightly and were below the YTD average. 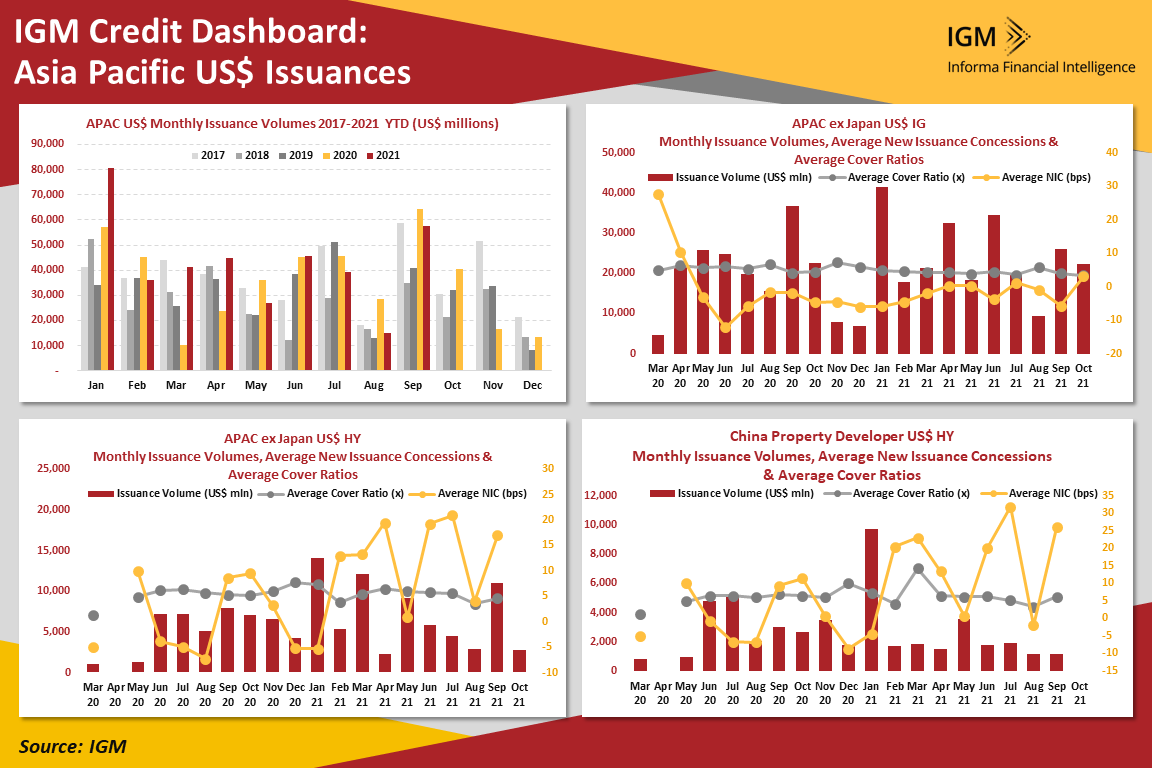 The APAC US$ primary market struggled to maintain any prolonged periods of fluidity throughout much of the month of October 2021, as borrower's plans to secure funding ahead of potentially higher interest rates down the road were often derailed by regular bouts of acute secondary market volatility, as fallout from the Chinese property sector's woes tightened its grip on the broader offshore bond market.

Having said that, total Asiadollar issuance volume managed to close out at a credible US$34.39bn (including Japan) in October, which, while falling well short of the US$57.668bn that priced the previous month of September and was also down on the US$40.614bn that got over the line in October 2020, still boasted the second busiest month of October in the past five years by issuance volume.

Stripping out the contribution of Japanese issuers to October's total saw the month produce US$28.990bn, with investment grade rated transactions accounting for US$22.42bn of that total, a sizable chunk of which materialized in one particular week ending 22nd October when US$12.38bn of IG paper was sold. That as APAC IG issuers seized on a more conducive window of opportunity consistent with a more constructive secondary market tone.

That was triggered by some rare encouraging news flow surrounding the beleaguered Chinese property sector, including some soothing rhetoric from the central bank who maintained the China Evergrande crisis was controllable, and news that Evergrande had managed to stave off default at the last minute having made a well-flagged US$43.5m offshore bond coupon payment.

The tightening bias was unable to last however, and issuance volumes subsequently tapered off in in the latter part of the month, as renewed fallout from the property sector's woes, ongoing inflationary pressures and supply chain concerns all weighed on secondary market valuations once again and took the wind out of the primary market's sails.

The challenging market conditions faced by many high-grade issuers in October is clearly highlighted by the average new issue concession which jumped to 3.07bp from -5.77bp (negative) the previous month. At the same time, the average cover ratio dipped to 3.39x in October, down from 4.01x in September and an even more healthy 5.82x in the seasonally slow month of August.

And if market conditions proved difficult to navigate for some regional investment grade issuers in October, that was a drop in the ocean compared to the massive challenges Asia Pacific's higher yielding names encountered.

That is highlighted by the paltry US$2.71bn of high yield rated transactions that made it over the line in the month, although even that doesn't tell the whole story given that that figure is made up of just two individual transactions, one of which is a US$1.7bn Additional Tier 1 Preference Share issue from China Cinda Asset Management Co., Ltd, which is rated A3/A-/A at company level.

Needless to say, it was an even more disastrous month for cash strapped Chinese high yield property developers in October, none of which managed to access the offshore market for the second time this year, after the same thing happened in April 2020. 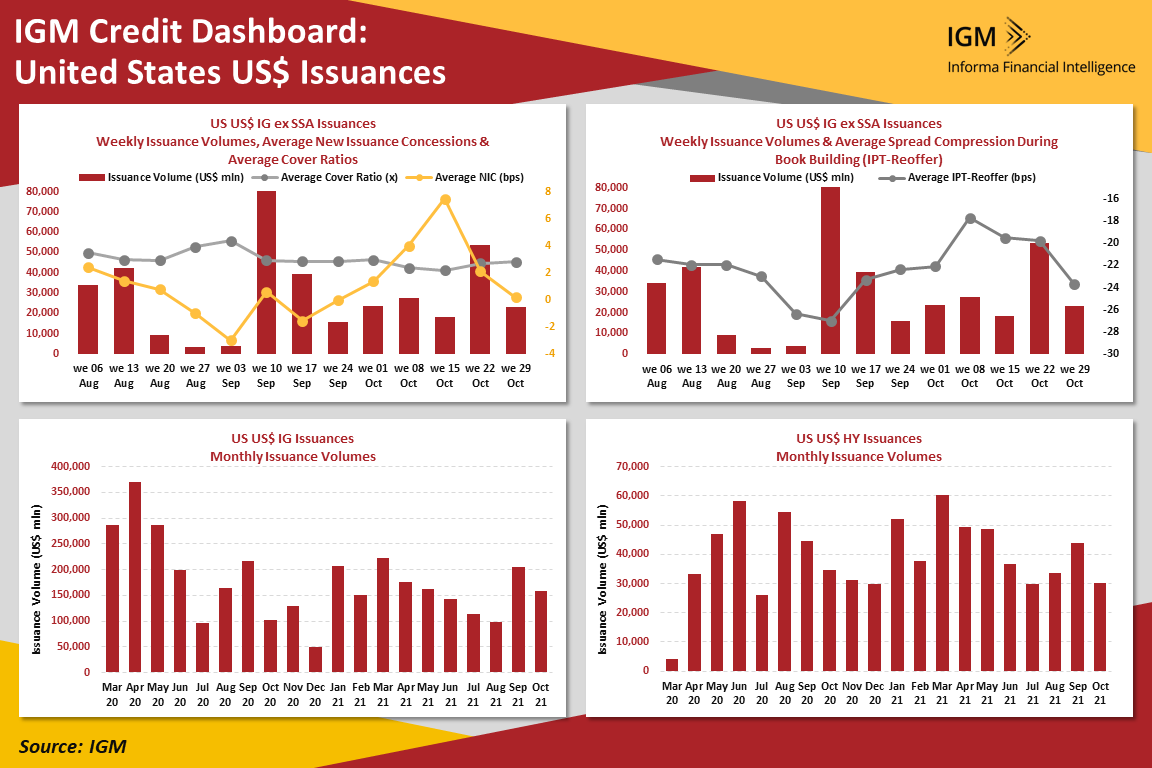 Overall US IG (SSA-inclusive) issuance in October outpaced market expectations at US$157.737bn, topping the highest monthly estimate of US$125bn. Even if volumes pulled back from September's lofty US$204.70bn post Summer volume, it marked the sixth busiest month this year and the highest October volume on record, topping 2017's US$153.82bn haul and proving some 53% larger than last October's extra-ordinary performance. As for the year, the Street was initially looking for, on average, US$1.65tln in overall issuance. As it stands right now, year-to-date overall issuance sits at US$1.632.551bn, a mere $17bn away from that mark.

US IG EX SSA issuance came in equivalently robust in October at US$122.287bn, (1) topping all monthly estimates, including the most optimistic one of $101bn (2) making it the most prolific issuance October on record, topping 2017's US$120.186bn (3) making it the eighth month this year that ex-SSA supply has topped the century mark (4), making it the fifth busiest month of the year.

We also saw a huge boost to M&A-related transactions, with the pricing of AerCap's mega-$21bn 9-pt transaction and Thermo Fisher Scientific's $5.85bn 5-pt deal. All told, M&A-related deals (4) combined to contribute US$29.05bn, or 16% to October's bottom line. That brought the year-to-date M&A-related volume to US$118.82bn.

With ex-SSA issuance surpassing the century mark, there were some signs, however slight, that investor fatigue, might just be setting in, with the average monthly NIC rising to 2.86bp, the highest this year. Average cover ratio on the deals also fell further below 3.0x to the lowest this year at 2.56x whilst the average spread contraction from IPT/PX also shrank to 20.04bps.

US SSA issuance totaled US$31.96bln, to represent 22.5% of total IG issuance. It marked the fourth busiest month of the year for SSA issuance and like ex-SSA a record for October. Of the 21 SSA issuers that came to the market, largest deal was the People Republic of China's jumbo US$4bn 4-part which attracted combined books of US$23.2bn (incl JLM interest).

Looking ahead, the month of November is historically a fairly busy month. In terms of ex-SSA issuance, it has ranked as the fifth busiest month of the year over the past decade where the volume has averaged US$99.98bn over that period.

From what we're told, there are close to a dozen companies preparing marketing presentations for potential trips to the market this month. That plus an overflowing pipeline of M&A transactions that still need to be financed could also add to November's volume. We could also get a deluge of issuance from those companies which were handcuffed by earnings blackouts in October whilst there have been several recently announce share buyback programs which could eventually lead to visits to the primary market somewhere down the line.

On average, the Street is looking for US$99.4bn in ex-SSA issuance to come to market in the month of November. While the lowest estimate is calling for US$90bn, and the highest is calling for US$100bn, 20 of the 24 desks we heard from picked US$100bn as their estimate of choice for issuance this month. As always, stay tuned.