How a Macron Presidency Could Bring About ECB Tapering 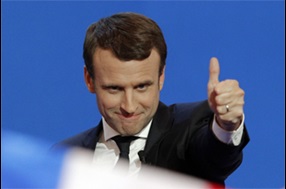 An ascension of Emmanuel Macron to France’s presidency could trigger a much-anticipated event in European financial markets: the scaling back of the European Central Bank’s vast stimulus program.

ECB policy makers have been wary of signaling an end to their monetary stimulus amid the risk posed by the rise of euroskepticism. That is despite evidence of a strong economic rebound in the 19-nation eurozone.

ECB rate setters will gather in Frankfurt on Wednesday and Thursday for their next policy meeting. They are widely expected to leave their policy mix unchanged.

But Mr. Macron’s first-place finish on Sunday, ahead of anti-euro candidate Marine Le Pen, places him in pole position for May’s second round and puts a reduction of monetary stimulus back on the agenda, investors say.

Any such move by the ECB would have a big effect on markets, driving money out of bonds and, if investors stay confident about the local economy, moving more cash into riskier assets. On Monday, European stocks rallied, and German and other safe-haven government bonds sold off.

“The focus will now shift to the improving eurozone economy and the prospect of the European Central Bank beginning to withdraw monetary policy stimulus,” said Anthony Doyle, fixed-interest investment director at M&G Investments. “European government bond yields will likely come under pressure in the months ahead.”

When the Federal Reserve signaled in mid-2013 that it might start scaling back its bond-purchase program, known as quantitative easing, or QE, market volatility spiked and bond yields jumped more than a percentage point in an episode known as the “taper tantrum.”

Away from the political sphere, the outlook for the eurozone has been brightening for months. Eurozone business surveys published by Markit on Friday indicated activity is at its strongest level in six years. The region’s unemployment rate, at 9.5%, is the lowest since May 2009 and consumer prices rose 1.5% in March from a year earlier, a rate not far away from the central bank’s target of close to, but below, 2%.

The big question is: When will officials start reacting to this data?

While the central bank has moved to curb its stimulus in recent months by slowing its bond purchases and phasing out a series of free loans, some top officials have denied that those changes mark a turning point.

ECB rate setters will meet again in Frankfurt on June 8. While few investors expect significant policy moves to happen then, many believe that officials will start preparing markets for tighter money in the future. They may drop a pledge to increase the bank’s stimulus efforts again if the outlook darkens. That so-called easing bias “could well be discontinued in light of all the positive news that is coming in,” said Dutch central-bank governor Klaas Knot.

Investors are also zeroing in on increasing discrepancies between the views of officials from Northern and Southern Europe. The former have appeared more eager to unpeg the central bank’s benchmark interest rate from its currentrecord-low level of minus 0.4%.

But unlike in the U.S., where stocks came under pressure during the taper tantrum, the ECB’s shift might come a time when investors are increasingly willing to take risks.

On Monday, the Stoxx Europe 600 index gained 2.1% and eurozone bank stocks jumped almost 7%, as investors imagined the benefits of stronger economic growth and higher interest rates to their profits. Meanwhile, the spread between 10-year yields in French and German government bonds—a sign of how much riskier investors deem French debt to be—has almost halved from February levels, the widest since 2012.

Indeed, the political risks that have sandbagged European markets over the past year may be starting to dissipate. While eurozone stocks continue to trade at a discount to those in the U.S., money has cautiously started to return to the region’s equity funds, according to data provider EPFR Global.

“If anything we could be towing back from populism,” Mark Dowding, portfolio manager at London-based BlueBay Asset Management, who bet against French government bonds earlier in the year and has been cashing in on some of that investment.

Last month, fears that Geert Wilders ’ euroskeptic Party for Freedom might emerge victorious in Dutch national elections also proved unfounded. In Germany, support for the euroskeptic Alternative for Germany party ahead of the Sept. 24 election is now below 10%, while Chancellor Angela Merkel’s Christian Democratic Union and her main rival, Martin Schulz’s Social Democrats, are both polling above 30%.

A policy reversal from the ECB may actually help mainstream parties, as it would relieve pressure on the nation’s conservative savers.

Over the last two months, markets have only timidly started positioning for tighter ECB policy. Derivatives that protect investors against moves in short-term interest rates have shown a consistent trend toward signaling that future rates might be slightly higher.

To be sure, top officials continue to urge caution in their last public comments before this week’s policy meeting. ECB chief Mario Draghi warned in Washington on Friday that underlying inflation in the eurozone was too weak and the bloc’s economy still needed “very substantial” support from Frankfurt. His top officials struck a similar tone last week.

“Inflation is just not there outside of energy,” said Kathy Jones, chief fixed-income strategist at the Schwab Center for Financial Research. “I think that expectations of ECB tapering are a little bit premature.”