Equity investors get back on the horse in early February

Equity investors get back on the horse in early February

Flows into Equity Funds jumped to a 21-week high during the first week of February, with over $35 billion committed to US Equity Funds, as investors responded to the cheaper valuations on offer after January’s sell-off. But the fear that the Federal Reserve could hike rates at each of their remaining 2022 policy meetings, which triggered the recent declines in US equity markets, continued to chill appetite for bonds. The Bond Funds tracked by EPFR posted their fifth consecutive outflow, a run that has seen over $35 billion redeemed since the second week of January.

While the Fed signaled its intention to tackle an inflation rate running at a 40-year high back in late November, the European Central Bank (ECB) only pivoted from its ‘transitory’ narrative earlier this month. During the week ending Feb. 9, flows to Europe Equity Funds came in at a healthy $2.2 billion while nearly $5 billion was pulled out of Europe Bond Funds.

While showing real sensitivity to interest rate risk, mutual investors remain comfortable with other kinds of risk. Alternative Funds posted their fourth straight inflow and sixth in the past seven weeks while three of the four major Hedge Fund groups took in fresh money. 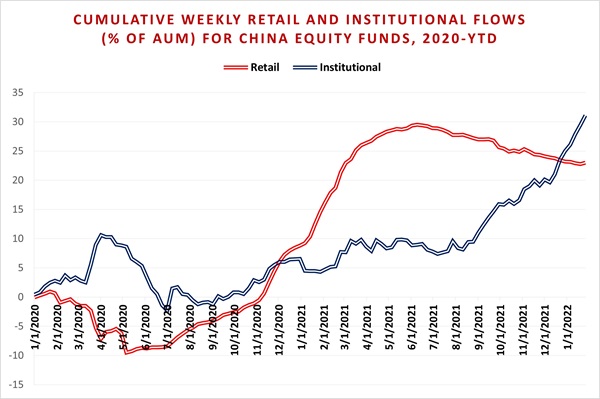 The latest Hedge Fund Flows data, drawn from a more granular but lagged dataset that incorporates funds tracked by partner BarclayHedge, shows that funds with multi asset, long-short, macro and event driven strategies were the most popular with investors in 4Q21. Unconstrained fixed income and diversified commodities trading strategies were the least popular.