13 May 2020 by Tony Nyman
Topics: Industry News |
Provided by IGM FX and Rates |
Get a free demo
Login to IGM

In our piece NEXT WEEK - WHICH SIDE OF 100? , we questioned whether Fed negative rates speculation will weigh on the Dollar and prevent the DXY from reclaiming the 100.00-plus handle?

Well, the latest Fed comments indicates there could be some push-back against the controversial subject matter.


Looking at the sixth window of the US Dashboard as well, the implied probability of another Fed cut by December is just 15%, despite the COVID-19 related economic concerns. We suggest keeping an eye on upcoming speeches and possible comments on the subject from other Fed members and in particular a discussion on current economic issues by Fed Chairman Powell on Wednesday.

Here are views of some of the major banks:


There has been a feeling early in the week that the US Dollar’s gains could well be down to fears of a second spike in COVID cases once lockdowns are eased across the globe. Perhaps, but we also suspect it could be position adjusting ahead of Powell’s speech on Wednesday.

Per our technical charts: 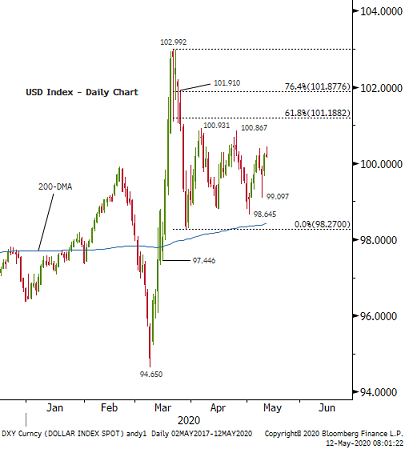