Energy Sector: The yin and yang of SRI/ESG

Energy Sector: The yin and yang of SRI/ESG

If you use social media and the entertainment industry as your filter, it doesn’t take long to identify the two dominant conceptions of what it means to be an energy company.

One is the classic, extractive behemoth whose mining, drilling and transportation actives destroy the environment and displace communities and whose business operations are punctuated by explosions, spills and the release of greenhouse gases. The other is technologically cutting edge, focused on renewable sources such as wind, solar and tidal and directed by socially conscious management.

Given the clarity of this distinction, the basic strategy for long-term investment in the energy sector – especially if you have an SRI/ESG focus --seems blindingly obvious: steadily cut investment in all companies whose business model is tied to fossil fuels and replace them with companies whose goals and output are certifiably renewable, low impact and carbon neutral.

As with most black and white narratives, the reality is much more complex. Oil majors are a rapidly growing players in green energy research, production and delivery. British Petroleum’s portfolio of assets includes 1.5 Gigawatts of solar generating power while Exxon’s annual investment in low carbon technologies is approaching $1 billion.

Seemingly pure ‘green’ plays, meanwhile, do not always sit neatly in all three of the ESG buckets. A US company making solar panels would appear to check a lot of the right boxes. But if they’ve sourced most of their production from China, what does that do for US communities and workers’ wages? And if most of their output goes on the roofs of well-off people who then quit existing grids, leaving less well-off people to carry the running and maintenance costs of existing infrastructure, do the green benefits outweigh the equality issues?

Given these trade-offs, and existing narrative that sidelines many big, established names despite their success from a business perspective, what value do ESG/SRI screens and/or raw data provide for investors?

The answer may lie at the company rather than the sector level. Energy companies that consistently record scores in key ESG areas are showing an awareness of the broader operating environment for the energy sector that their ‘old school’ peers. And, with overall flows to equity mutual funds struggling except for those with SRI/ESG mandates, the SRI/ESG information generated by Data Simply’s machine learning analysis provides a useful marker of a company’s attractiveness to the funds that are reliably receiving fresh investible capital. 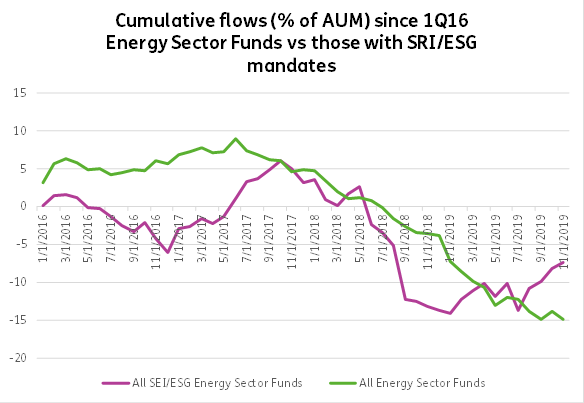 Anadarko Petroleum, a US-based subsidiary of Occidental Petroleum whose core business is oil and gas exploration, is one example of a company were a drop in its focus on ESG was followed by a drop in its share price. The bars in the histogram below represent the number of times in a month where words associated with environmental, social or governance issues appeared in that company’s filings with the S.E.C. The line-chart overlay represents the cumulative return of the company’s stock over the period. 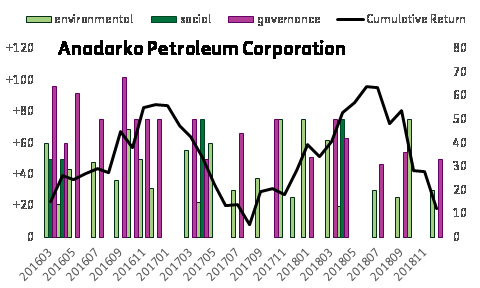 As you can see from the chart, when the company paid attention to ESG -- at least as measured by its filings with the S.E.C. -- the stock performed well. Later, the company’s attention waned and the stock proceeded to roll over. There was then a renewed emphasis on ESG causing the stock to bounce back. But alas, that second wave of enthusiasm, too, proved short lived.

Diamond Offshore Drilling is another case where ESG and performance show a correlation. 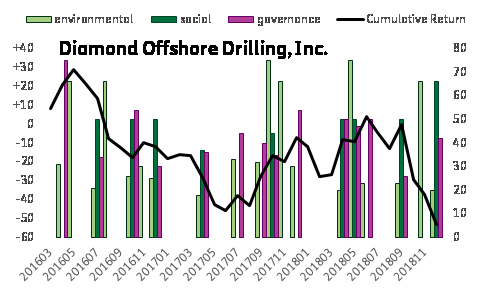 In early 2018, there was a burst of attention to ESG, as measured by S.E.C. filings. During that period the stock performed well. That performance, unfortunately, proved as ephemeral as Diamond’s attention to ESG.

One or two swallows do not make a summer. But broad trends suggest that, at the company level, investors and financial professions prospecting in the energy sector should add an SRI/ESG tool to the box.