06 May 2020 by Christopher Shiells
Topics: Industry News |
Provided by IGM FX and Rates |
Get a free demo
Login to IGM

Last week saw USD/TRY finally break above the 7 handle, which it had tested for the past nine sessions. This is seen as a psychologically important level as the last time the Lira was this weak was during Turkey's August 2018 currency crisis, which brought an all-time nadir of 7.2362.

Why is this important? Well the level is arbitrary, but the government and implicitly the CBRT had decided that this was worth protecting for some symbolic value (do not want to see comparisons to 2018 when the CB had to hike rates massively??). In fact for most of this year the CBRT and government have been slowing the depreciation of the Lira, as they have pursued an easing cycle of sharp rate cuts (1,525bp in total since July last year) to try and support the economy via credit driven growth. Note, Fitch warned in March that Turkey's high external financing requirement, with about USD170bn in short-term debt payments coming due this year, made it vulnerable to a deterioration in market sentiment, which is the main rationale for slowing the Lira's decline.

To some extent the CBRT has been successful, as the Lira only lost ca. 10% of its value vs the USD in Q1, whilst the likes of the BRL, ZAR, RUB and MXN lost 20% or more. The CBRT achieved this by running down its FX reserves and recycling the near record high FX deposits at banks (~USD195bn as of Apr 24 - see dashboard below) via Lira swaps to boost the reserves. State banks have been used as the agents to sell these USDs in FX markets to support the Lira. At the release of the latest inflation report, the CBRT stressed that it was not seeking to defend a specific level for the Lira and that is partially true since it is the dutiful state lenders that through the backdoor have used USDs and sold them in the TRY market to support the currency.

Thus, Turkey's foreign-currency regime is now seen as a dirty “managed float", not just because of state banks' offloading of USDs but because of the limits introduced by regulators on local banks' derivative positions with non-residents, designed to stand in the way of short sellers. This has effectively removed foreigners from the FX market, as can be seen by the non-resident holdings of equity and domestic debt securities, which on a cumulative rolling 52-week period have turned negative since the start of the year (see dashboard below). 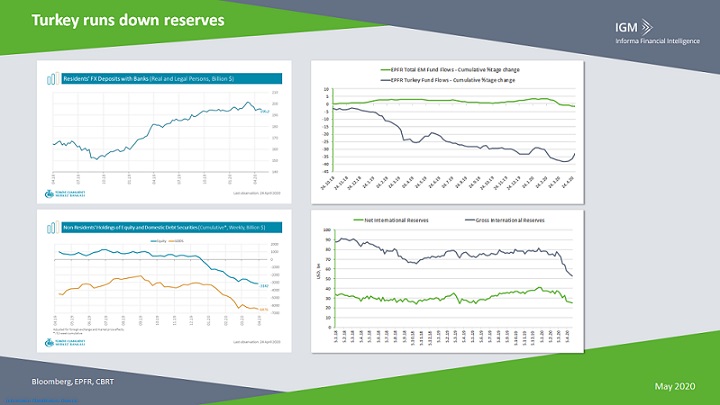 CBRT has created a problem of its own making

As mentioned, the CBRT has been burning through reserves this year in a battle to keep the Lira stable vs the USD. Since the start of March the CB's gross reserves excluding gold have fallen USD24.7bn to just USD52.7bn as of the week ended 24 April. However, it is the net reserves picture that is worrying, with the weekly CBRT data showing that these dropped to USD25.147bn as of 24 April using current FX rates (see dashboard above). However, the IMF-defined FX reserves measure, which exclude gold and short-term swaps, showed these net reserves falling below zero at the end-February, while the figure without the exclusion of gold dropped into negative territory as of mid-April.

This shows how the CBRT's reserves are now borrowed from state banks via swaps. However, the level of these FX swaps is hard to calculate, as last year the central bank switched from using its own swap facility for these transactions to using the Istanbul stock exchange. While the central bank publishes weekly figures for net and gross foreign currency reserves, data on short-term swaps is published on a monthly basis with a lag of several weeks.

However, it has been estimated that Turkey sold USD66bn of its reserves from January 2019 to March 2020, supporting the Lira, including USD32bn in Q1 of this year alone, reported Reuters citing local bankers. The quoted figures do not include the sales that would have taken place in April.

As shown above the CBRT has been protecting the Lira, which in the illogical world of Turkish monetary policy has been pursued as the central bank has been cutting rates and of late embarking on QE to help fund the government's measures to counter the effects of the country's severe COVID-19 outbreak. The CBRT is simultaneously printing money and then selling reserves to slow the Lira depreciation that this has caused.

Many believe that like in 2018 the CBRT will be forced to hike rates, and massively, as like then the CBRT and government is only making the ultimate economic pain harder by refusing to pursue orthodox policy measures.

But how long can it wait? It is gross reserves that still counts, of which it still has about USD50bn. The state banks have around USD20bn in additional FX liquidity, available for swaps, while there is approximately USD30-35bn of gross gold reserves at the disposal of the CB. So, at this rate of FX reserves depletion the CB can go on pursuing its loose policy mix possibly to year-end.

The latest inflation report contained a lower inflation forecast for 2020 (7.4%) and thus, additional monetary easing looks very much on the cards. Depending on how much pressure the Lira comes under, the government will need to find another source of USD funding sooner rather than latter to try and calm Lira depreciation.

Turkey may be hoping it can secure a USD swap line from the Fed, as there has been a noticeable charm offensive from Ankara to Washington over the last few weeks. However, a senior American official has played down Turkey's prospects of securing USD financing from the Fed as they only provide them to central banks that meet their eligibility criteria - which is based on a strong record of independence and solid economic fundamentals. A Fed swap line could be used for geo-political reasons to get Turkey to make concessions, not least on the S-400 purchase, but a Turkish official last week reiterated the government's plan to activate the Russian-made systems later this year after a delay caused by the pandemic. So at the moment, this avenue looks unlikely.

President Erdogan is hoping that there will be a turnaround in capital flows to Turkey once the Covid-19 pandemic is under control, but this is also unlikely given that investors will not be rushing back into Turkey anytime soon, as the EPFR fund flows data shows that investors have been avoiding Turkey for the last two years (see dashboard above). It is also very unlikely that Turkey's key tourist industry will bounce back quickly.

The last resort will be for the CBRT to hike rates dramatically and possibly put in place capital controls, before all its buffers are depleted.

Thus ahead of this potential crunch, there is scope for continued Lira weakness because of a combination of negative real rates, increased Try supply as a result of the central bank's government bond purchases, and outflows from local assets. Our Tech charts suggest that USD/TRY could target a return to those record highs recorded at the height of the 2018 currency crisis of 7.2362. 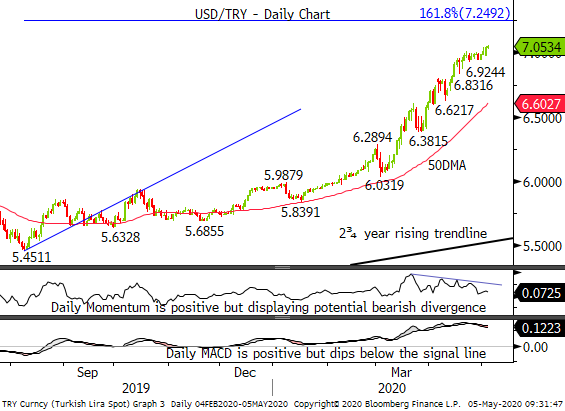