The 2-day FOMC meeting will kick off soon after this article is published and the firm market consensus as of now is that the Fed will cut Fed funds rate by at least 25bp at the meeting.

A kick-off of the Fed easing cycle would (1) keep the USD and core rates pinned down, which should pave the way for Asian FX appreciation against the USD (chart 1); and (2) should be conducive for EM carry trades again (Chart 2).

However, the first scenario may fail to materialise if the central banks in EM Asia unexpectedly adopt a more aggressive monetary easing stance in response to Fed's move. As a matter of fact, Bank of Korea and Bank Indonesia already lowered their policy rates earlier this month before it's too late.

No matter whether the first scenario materialises or not, we are confident that EM carry trades will turn popular again. 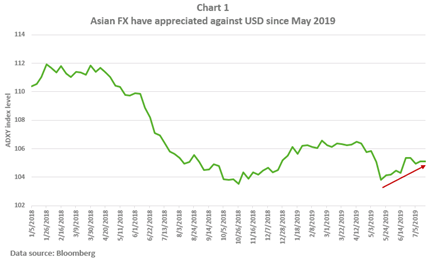 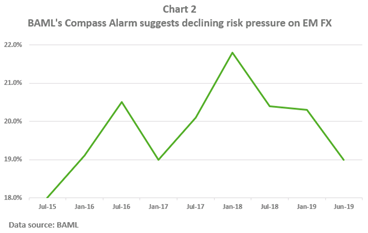 Chart 2 suggests that the pressure on EM FX has fallen to a level very close to the low registered in July 2015. Historically, lower this pressure is, more incentives the investors will have to enter the EM carry trades.

Within Asia, we like going long in INR/CNH to earn the rich carry generated by INR over CNH. One of the fundamental reasons justifying this trade is CNH will remain more trade-challenged than INR because it is difficult for China to reach trade agreement with the US in near term.

Compared to China, India is more fundamentally solid. Besides being less trade-challenged, India's FY2019-2020 budget suggests the government will be more disciplined in controlling the fiscal deficit.

In our view, INR is the best EM Asia FX counterpoint to the weakness in the China-linked bloc, as the currency continues to enjoy impressive FDI and FPI flow support since PM Modi's landslide election victory in May. Our strategy is to set long position in INR/CNH at the multi-month uptrend support currently lying at 0.0991 for profit target at 0.1010.