On 7th May 2020, PBOC and SAFE officially issued the "Measures on Capital Management of Foreign Institutional Investors Investing in Securities and Futures in China". The key features of this policy are summarized below:

As per the state-owned media, the removal of the quota restrictions on QFII, RQFII is aimed at boosting financial opening. But we believe it, to a certain extent, is more or less driven by policymakers' concerns over FX reserves adequacy. Chart 1 shows that China's FX reserves have been failing to increase further since reaching USD3119bn in summer last year. With monetary easing underway, more FX reserves are needed, otherwise it will be increasingly difficult for PBOC to stabilize RMB FX. It's worth noting that the USD30.9bn increase in FX reserves in April was still far from big enough to offset the USD46.1bn decline in March. 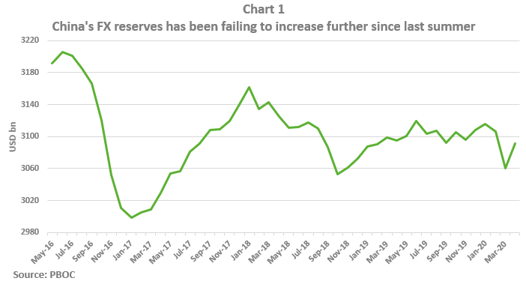 In regard to external trade, we note that China's imports from the US have not been doing very well (chart 2), since the phase-1 trade deal was signed in mid-Jan. We are quite sure Donald Trump takes those numbers quite seriously as with the presidential election approaching he very much needs to show his success in making China committed to purchase more US goods. In fact, we have noted a couple of developments recently: 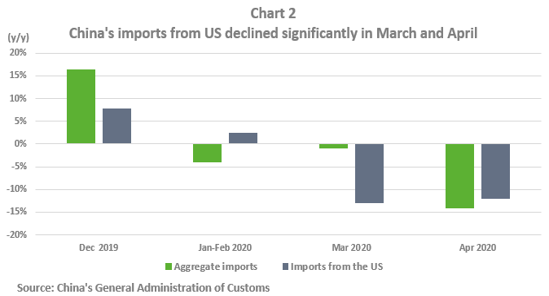 However, amid the slowing internal demand in China as a result of the COVID-19 pandemic and shrinking FX reserves, it should be extremely difficult for the top Chinese policymakers to guarantee China will 100% meet Trump's request. Against this backdrop, we reckon Donald Trump will take some aggressive moves, which may be quite hostile, on China later this month or in June.

CNH historically was well-supported in the month when the NPC meeting took place. Because the NPC meeting is scheduled for 22 May, there is a good chance that CNH will be trading on a firm note most of the time this month. However, this could be the last bit of strength that CNH will show before depreciation pressure re-emerges (chart 3) as a result of Trump's next hostile move against China. We expect renewed depreciation will bring CNH back to 7.16-7.18 against the USD later this summer. 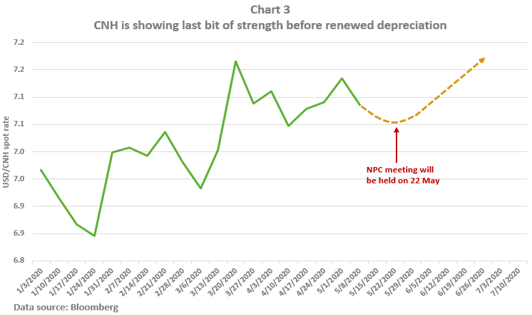