EM Viewpoint: CLP may start to lose out as political risk increases

27 Jul 2020 by Christopher Shiells
Topics: Industry News |
Provided by IGM FX and Rates |
Get a free demo
Login to IGM

This viewpoint assesses the mid-term outlook for the CLP after a tumultuous year because of the Covid-19 pandemic. However, before Covid-19 and after (whenever that may be) the domestic political agenda/social unrest was just as volatile, and put on hold due to the pandemic.

Chilean Peso has been the region's best performer this year

The Chilean Peso has been Latin America's best-performing currency this year, but is still softer vs the USD, down 4.5%, although this pales in comparison to the 24.5% drop in the BRL. Amid the peak of the Covid-19 pandemic and lockdown, the CLP's losses peaked at ca. 15% vs the USD. Since mid-March the CLP rebounded to pare most of this year's loss (+10% vs the USD since 18 March) as Chinese demand for copper, Chile's top export, broke records.

This has been mirrored by the EPFR country fund flows data (see dashboard below), which shows Chilean bonds saw massive net outflows between the end of February and the end of March, but have since begun to pick-up, whilst net outflows from Chilean equities have plateaued.

Looking at the impact of the Covid-19 pandemic

Coronavirus infections have surpassed 330,000 in Chile and more than 8,000 people have died (as of July 20). The outbreak and lockdown measures have been a significant drag on the economy. The central bank expects GDP to slump by between 5.5% and 7.5% this year, after Q1 growth of 3.0% q/q, recovering from Q3's 4.08% contraction (social unrest driven - see below).

The economy is recovering, but still falling. The economic activity index fell 15.31% m/m in May, after declines of 14.1% in April and 3.08% in March. The index in May was at its lowest level since September 2012. Mining accounts for 9% of total activity for Chile and it has been more resilient and limited during the downtrend. Mining activity fell 0.6% m/m in May after an advance of 0.8% in April and a decline of 1.4% in March. However, an increase in Covid-19 cases among mining workers could bring about additional restrictions and slow output, leading to an additional drag on 2020 growth. 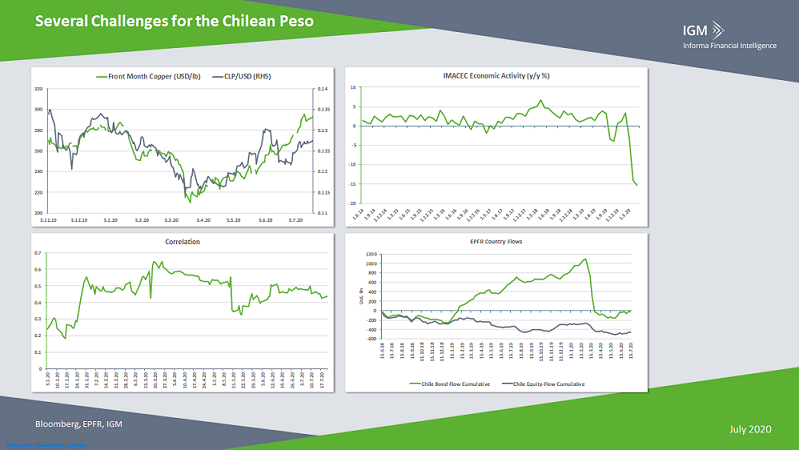 Chilean Congress earlier in July approved a law that allows people to withdraw 10% of savings from their retirement accounts (AFPs) to cover for lost income due to the coronavirus crisis. The bill is being voted on in the Senate this week.

It is widely expected that if the pension withdrawal bill becomes law in Chile this will spark big outflows from the funds, putting pressure on local bonds, but may temporarily boost the CLP. BBVA estimates up to USD18bn in pension fund outflows in total if the bill is approved. Given higher liquidity for foreign assets, it is expected that the pension funds faced with short-term needs for cash to meet these withdrawals would have to liquidate these external assets over the short term. This would drive near term CLP appreciation, as the liquidation of these assets (both fixed income and equities) would lead to FX flows that would need to be converted to CLP. In the mid-term, there could also be a liquidation of local fixed income holdings, leading to steepening pressures on the sovereign/Camara curves.

However, the extent of the outflows from local currency assets is unknown. AFPs have little more than half of their USD200bn in assets under management in local fixed income and may try to maintain that allocation. Bice Invesionnes has estimated that if everyone withdrew the 10% of savings allowed by the bill, then the AFPs would have to sell about USD10bn in local notes “which would have a one-time effect of pushing local yields up about 30bp". Scotiabank estimates sales of as much as USD2.8bn in local currency Treasury bonds alone.

In the long-term, the effects will be more fiscal as the bill requires the government to cover for part of the withdrawn funds, and lower pensions. It has also perhaps added to Chile's risk premium as resources once seen as untouchable are now in play every time there is an emergency, increasing country risk.

However, passage of the bill is not a forgone conclusion. The government has opposed the bill, as it only helps a small portion of people with enough savings and will affect future pensions. This may further fuel the social tensions that led to the huge protests of late 2019, which as we discuss later, may again rear its head with the Constitutional referendum in October. Instead, it hopes to convince lawmakers to support its own package of measures that reach many more people, according to Finance Minister Brione.

A constitutional referendum, delayed until October from April by the pandemic, could stir a return to the unrest that swept the nation last year. Recall in October last year, Civil protests swept through Chile in response to a raise in the Santiago Metro's subway fare, sparking a wave of anger over the increased cost of living, privatisation and inequality.

The coronavirus has dampened the risk of unrest in the short term, but in the coming months and years the economic crises brought about by the coronavirus will only heighten social pressures and create the potential for even greater instability and even more social unrest.

The social unrest at the end of last year was a major driver of the CLP to the downside and that has the potential to flare up again in October. The change in the constitution is the government's attempt to placate the protesters.

Several challenges for the Chilean peso

As mentioned at the start, the CLP has seen a strong rebound since mid-March, but looking ahead for the rest of this year, our view is that risks are tilted towards renewed weakness as investors brace for the return of political risk. The pension fund withdrawal impact is likely to be just a one-off move and ultimately the driving forces will remain political/virus and fundamental. The positive impact on the CLP will be temporary. Also working against the CLP is the BCCh's policy response, with the CB cutting rates to fight the pandemic and promising to keep rates low, this has reduced the currency's carry appeal.

Thus we expect that USD/CLP could see a near term drop towards the 756.87/758.88 support zone, but this would just open up opportunities to establish a long position, targeting 833 and then 850.

There is a risk that the CLP could see a catch-up rally with copper having lagged over the last month, which saw the correlation drop below 0.5 (see dashboard above). However the increased risk premium now being priced into the CLP could keep correlation below average.

Per our USD/CLP tech chart: 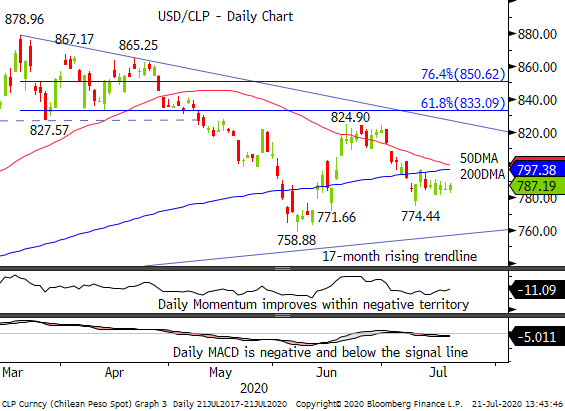