We saw a further escalation of the US-China trade war during the last week of May. After hinting at a potential restriction of rare earth exports to the US and announcing a plan to list out unreliable foreign companies, Beijing released a white paper putting all the blame on the US for the collapse of the trade talks and stressing China will not make any concessions to the US on the principal issues. 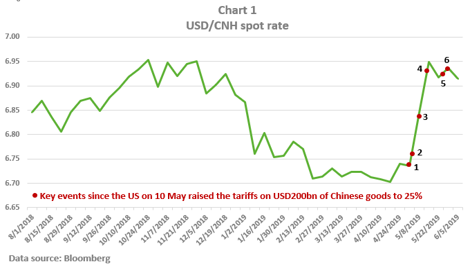 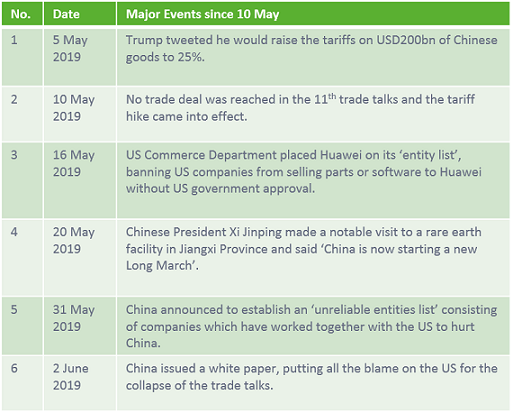 The above-said development (chart 1) indicates Beijing is ready for a strike-back instead of continuing efforts to negotiate with the US. In effect, we do not expect a trade deal from the G20 meeting on June 28-29.

At worst, the planned meeting between Donald Trump and Xi Jinping at the G20 summit could be cancelled. If not before G20, Trump in the rest of the summer will push out the deadline for tariffs to be placed on all of Chinese imports anyway unless a trade deal happens at G20.

In our view, markets may be just pricing a potential failure of the two leaders to reach an agreement at G20, without taking a potential decision of China to isolate itself into account. A possible repeat of "Long March" suggested by Xi already shows Chinese leadership's growing bias in favour of isolation.

In regards to the FX rate, we doubt PBOC will remain determined to defend CNY FX by setting lower-than-consensus USD/CNY fixing frequently after the white paper was released. In our view, Beijing might have already started to tighten the control over capital outflows since the 25% tariffs on Chinese goods came into effect on 10 May. With tighter capital outflow control already coming into play and the likelihood of a trade deal in the foreseeable future decreasing, PBOC now may be much readier to let CNY depreciate than a few weeks ago.

We herewith list out the duration and magnitude of CNH depreciation led by the forward curve steepening (in terms of 12-month vs 1-month USD/CNH FX forward spread) in the most stressful occasions since PBOC changed CNY FX regime on 11 August 2015 (chart 2). 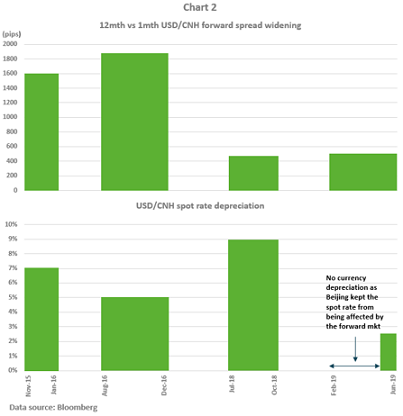 The track record based on the above three most stressful occasions suggests the spot rate depreciation in terms of both duration and magnitude is still too small to reflect the degree of stress arising from the escalating trade war.

Based on the assumption of 5% depreciation, which we already saw in the second half of 2016, we anticipate the USD/CNH will reach 7.04 in Q3.