USD/CNH reached as low as the 6.81 level at the beginning of this month. Recall, we said in the previous issue of this publication:

Based on this assumption, we believe USD/CNH for now has already largely priced in a victory of Biden, who did say in early-August that he would remove the tariffs on China if he won the election in November.

While FX players were still confident that Biden would defeat Trump in the election, we noted a few days ago Biden's clear lead over Trump as suggested by the betting odds (chart 1) no longer exists. As such, we won't be surprised if Biden fails to maintain his lead over Trump in some of the major polls before the first presidential debate takes place on 29 September. Because the market is very sensible, there is a good chance USD/CNH is already starting to price out some optimism over Biden's odds. Therefore, the risk of a bounce for USD/CNH from here should not be underestimated. In our view, 6.88-6.90 is reachable in the near term (chart 2). 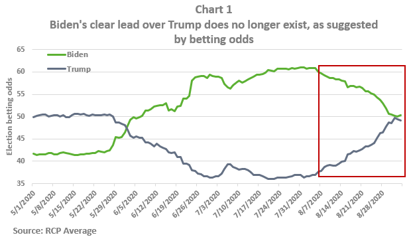 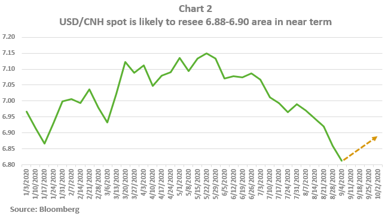 That being said, a downside attempt of 6.65 is not totally impossible in the long run even if Biden loses the election. Chart 3 suggests that China's external trade outlook has been improving since seeing a deficit of -USD7.1bn in Jan-Feb. If this positive trend continues, further appreciation of CNH to the 6.60-6.70 area against USD is still possible even without any reduction/removal of the existing tariffs. However, the above scenario has to be rewritten if Trump not only wins the election but also takes more hostile moves against China in his second term. 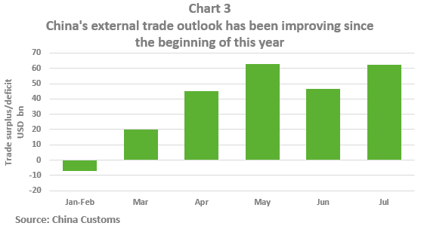