Joe Biden said in an interview on 5 August that he would remove Donald Trump's tariffs on imports from China if he won the presidential election in November. Biden's remark was taken very seriously by the markets as he has been holding a clear lead over Trump in polls since the beginning of Q2.

With specific regard to USD/CNH FX, a clean breach of July's month-low 6.9645 came immediately after Joe Biden said he would remove the tariffs on China. Since then, the pair has been pricing a potential rollback of the existing US tariffs on Chinese imports (chart 1). 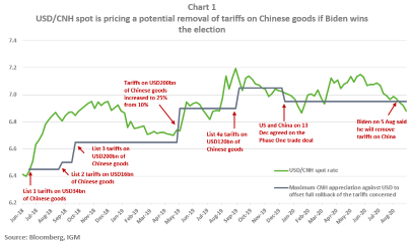 At the 6.90 level that we saw in the middle of August, USD/CNH appeared to have priced in a full rollback of the List 4a tariffs, which was initially targeted for USD300bn of Chinese goods, however later halved as part of the Phase 1 trade deal. A fall below 6.90 suggests USD/CNH is on the way of pricing as much as a 40-50% chance of a full rollback of List 3 tariffs (involving USD200bn of Chinese goods). In our view. USD/CNH will be at 6.80 when 50% of a rollback of List 3 tariffs is fully priced and at 6.65 when 100% of a rollback is priced.

With USD/CNH breaking below 6.90, we expect Chinese exporters' FX conversion ratio (chart 2) will be going up given better order visibility, weak USD, and a large yield pick-up to own RMB assets against USD, which may be another driving force behind the potential RMB appreciation in September. 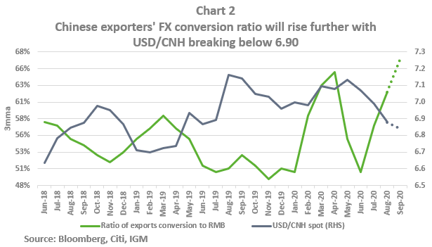 However, historically what polls suggest does not necessarily mean it will definitely turn out to be the actual election outcome. As such, we recently have seen USD/CNH risk reversals in the FX option market pricing a potential U-turn of the spot rate (chart 3). That to a certain extent reflects CNH bulls are increasingly biased in favour of selling low-strike USD/CNH puts to finance a purchase of high-strike USD/CNH calls as a hedge to defend their CNH exposure. 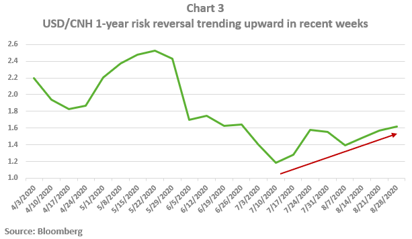