China Insight: What Tactics Are Good in Dealing With Ongoing RMB Depreciation

On 13th August New York time, the US Trade Representative's Office announced delaying till 15th December the 10% tariffs on about half of the USD300bn of Chinese goods, that were originally scheduled to come into effect 1 September.

Though the tariff delay should increase Beijing's interest in sending a delegation to Washington for another round of trade talks in September, we do not think a trade deal will be reached anytime soon. We reiterate our view that China is adopting "better-late-than-early" strategy and will continue to let the trade talks drag on till at least year 2020.

In our view, the more back-and-forth by Trump, the more volatile the USD/CNH is going to be. However, that won't reverse the depreciation trend of the RMB.
We saw a rangebound market followed by a deeper downward correction after USD/CNH set its new high of 7.1400 on 6 August. Nobody should be surprised by such a development if they make reference to what happened after PBOC changed the FX regime on 11 August 2015.

Experience learnt in the aftermath of the FX regime change on 11 August 2015 suggests a gradual rather than a one-off currency depreciation is far more acceptable to the Chinese leaders if devaluation (or depreciation) of the RMB is needed. This is particularly true this time around because:


Recall, RMB depreciated 13% against USD during the 16-month period starting from 11 August 2015. During those 16 months, there were 3 consolidation (or stabilization) periods with the shortest one lasting 3 months and the longest one lasting 5 months (chart 1), enabling many market participants to have sufficient time to have their FX exposures properly hedged if they wanted to.

We expect PBOC this time around will again let the RMB FX stabilize from time to time by intervention. If what we expect materializes, market participants in general should be still able to conduct hedging against RMB depreciation risk effectively.

Unlike 4 years ago, hedging RMB depreciation risk is far more affordable this time around, thanks to the cheapness of USD/CNH FX swaps.

Bear in mind, capital outflows still being very effectively curbed is one of the main reasons for the prevailing cheapness of the FX swaps. However, in the case massive outflows arise again, PBOC may have no choice but to tighten the liquidity, which as a result will drive the FX swaps upward and make hedging FX risk via going long USD/CNH forwards far more expensive. 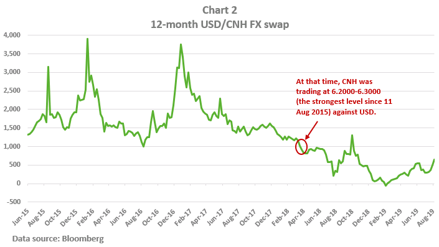 In regards to FX options, the USD/CNH implied vol curve has been inverted since USD/CNH surged thru the 7.00 level on 2 August. This type of vol curve inversion did occur a couple of times in the 16-month period starting from 11 August 2015 (chart 3), none of which however did sustain more than 4 weeks. 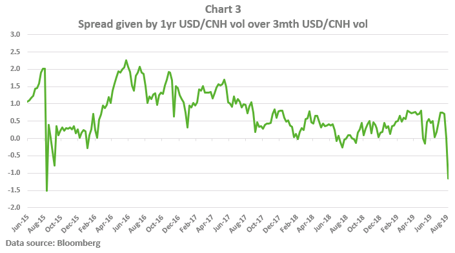 Failure of the curve inversion to be sustainable to certain extent was due to realized vols being well-capped by frequent PBOC intervention. We think this market pattern will repeat this time around. In our view, calendar spreads consisting of short positions in short-dated vols (e.g. 3-month) and long positions in long-dated vols (e.g. 12-month) are typically the preferred strategy in this market scenario.