PBOC on 6 September announced a cut in the reserve requirement ratio (RRR) for all financial institutions by 50bps and a cut for some city commercial banks by an additional 100bps, effective on 16 September.

As per PBOC, the RRR cut will release liquidity to the amount of CNY900bn (chart 1). The PBOC stressed that the 900 billion yuan of liquidity should enhance the source of funds for financial institutions to support financing needs of the real economy. 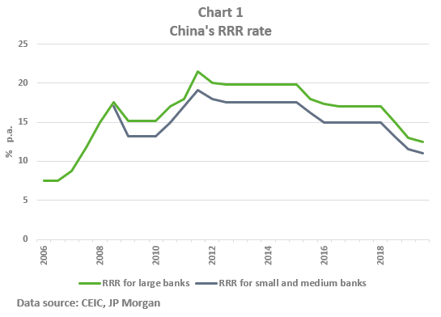 China's RRR cut further confirmed monetary easing is underway. We expect the loan prime rate (LPR) will fall further by as much as 10bp in the next fixing on 20 September (chart 2).

Meanwhile, the PBOC policy rate, i.e. medium-term lending facility (MLF) rate, will likely be trimmed by as much as 20bps twice by end of this year. A cut in the benchmark deposit and lending rates is also possible in Q4, but less certain than the MLF rate, if we see a sustained fall in the LPR fixing on 20 September and subsequently 20 October. 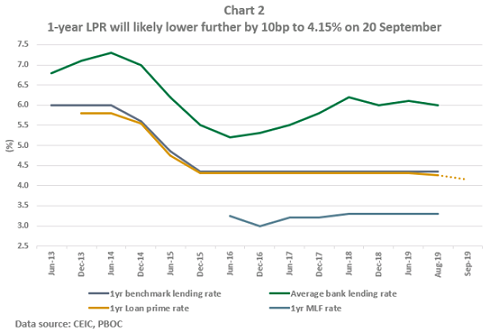 Accommodative monetary stance is favourable for rates and duration exposure. Recall, we provided our bullish view on China government bonds in the 21 August issue of this publication.

"We are bullish on China government bonds and expect CGB 10-year yield will reach 2.85% before the National Day on 1 October". 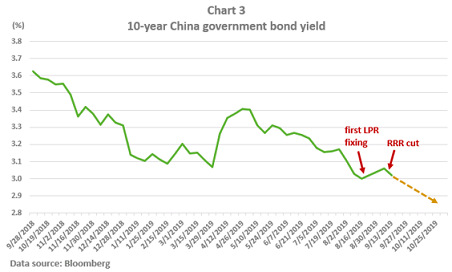