China Insight: RMB Depreciation Not Permitted as Yet

Chinese policymakers since the middle of May have started to express their intention to safeguard the currency against speculative attacks, given growing concerns in the market over an imminent depreciation of the RMB as a result of escalating US-China trade tensions:

Since learning a painful lesson after experiencing an unexpected currency devaluation on 11 August 2015, PBOC has become very careful in dealing with the RMB FX issue.

Experience learnt over the past years (especially in 2016) suggests mounting speculative attack on the RMB has always been reflected in a widening of offshore USD/CNH's premium over the far more regulated onshore USD/CNY. On many occasions, a sharp widening of the offshore premium resulted in a heightened fear of RMB depreciation in the onshore market, which finally became self-fulfilling. 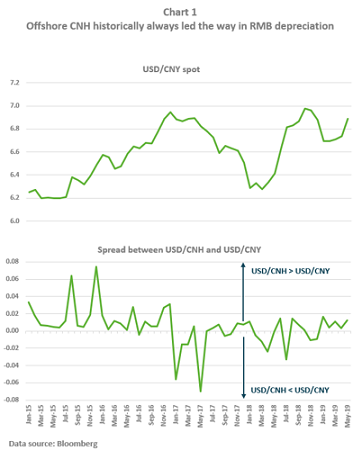 In contrast to most of 2016, the month of May this year was not particularly chaotic. At least, the offshore premium was maintained at a tolerable level (chart 1) during the month. This has suggested speculation over RMB depreciation in the offshore market remained tamed in comparison with that in the onshore market. Despite that, PBOC in order to keep the situation under control decided to plan a special CNH bill issuance. This move obviously aimed to tighten the offshore CNH liquidity available to the speculators who are ready to set CNH shorts.

Why the CNH? It is simply because historically the offshore CNH always led the way in RMB depreciation, which is reflected in a sharp widening in the above-said offshore premium.

Because the US-China trade war is underway, Beijing definitely would not rule out potential attacks on Chinese financial assets/markets. That could be one of the reasons why Chinese policymakers have been so high-key in expressing their intention to curb speculative selling in RMB since Trump's decision to increase the tariffs on USD200bn of Chinese goods 25% came into effect on 10 May.

Another reason could be Beijing's concerns over capital outflows. The outflows, which remained stable in March (chart 2), might have started to accelerate since 10 May. The experience learnt in 2016 suggests the scale of outflows is highly correlated to fears over currency depreciation unless very strict capital outflow controls are in place. We think Beijing will be trying its best to limit the currency weakness and curb the speculative selling in the currency for the time being. However, that does not necessarily mean in the eyes of PBOC that the USD/CNY must be kept below 7.00 level in the long run.

RMB depreciation is possibly very much alive as a policy option, especially if Trump and Xi fail to reach any agreement at the G20 summit in late-June and the US decides to put tariffs on all of Chinese imports.

What Beijing wants perhaps, is a currency depreciation at a manageable pace, if it as a policy option has to be put into play. Needless to say, tighter capital controls are needed to make this policy tool an effective one without sparking massive capital outflows.