China Insight: RMB Depreciation is Needed as Long as Trade Talks Drag on

Asian markets were shocked by Trump's announcement of the imposition of 10% tariff on the remaining USD300bn of Chinese starting, effective 1st September. The announcement came totally unexpectedly as nobody would think in advance that the face-to-face meeting between the US and Chinese trade negotiators would end up with further widening, instead of narrowing, of the gap between two countries.

What we have seen so far is just the first-order impact of Trump's tariff decision. Given that China has already run out of US goods which can be tariffed for the first time, there is good chance Beijing will respond to Trump with non-tariff retaliation. Non-tariff retaliation could include punishing the "unreliable" US companies selectively. Recall, China said at the end of May it would establish a list of so-called unreliable entities of foreign companies and people that seriously damage the interests of domestic firms. Second-order impact will surface once Beijing decides how it is going to retaliate, which we think will be known by middle of this month.

After that, investors will shift their attention to whether the next round of trade talks in Washington scheduled for early-September will happen as planned. Recall, China only sent a delegation headed by Vice Minister of Commerce Wang Shouwen, instead of Vice Premier Liu He, to Washington for trade talks in August 2018 when China had strong disagreement with the US on many issues. This time round China might be far less interested in making efforts to narrow down the gap between the US and itself than twelve months ago, so the possibility of sending a delegation headed by a low-ranked official should not be ruled out. At worst, China may discontinue negotiations straightaway by refusing to send a delegation to Washington. The third-order impact will arise if the worst happens.

In the USD/CNH FX market, on August 2nd we saw:

Reason for (1) & (2) is very simple - a currency depreciation is needed to compensate for the potential loss of export competitiveness caused by the new tariffs (chart 1). Chart (3) suggests the market was pre-supposing depreciation would happen on an immediate one-off basis. 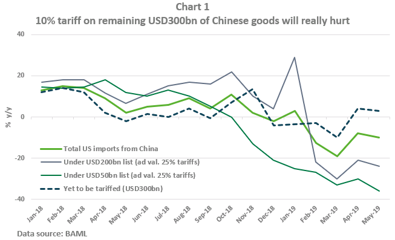 Within a few hours after RMB depreciated through the 7.00 level vs the USD, PBOC delivered two statements:

Historically when RMB was under severe depreciation pressure PBOC usually liked to say "there is no fundamental reason for sustained weakness of RMB" and/or "the recent RMB weakness is not fundamentally justified". However, PBOC did not say anything like this on 5th of August.

In our view, Chinese leaders do not mind if the RMB depreciates much further, as long as their strategy in dealing with the Trump administration can carry on and namely on the below basis:

The cost(s) of better-late-than-early tactic: 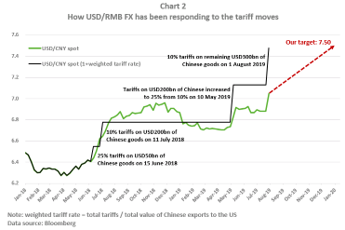 Compared to the RMB depreciation triggered by the change in FX regime in August 2015, the fall in RMB FX through the 7.00 level this time around has not caused much panic in front-end of USD/CNH forward curve. Take 1-month USD/CNH FX swap as an example, upside so far has been capped by 100 pips. That's very low, compared to 2018 year-high 310 (not to mention 1000-1200 area seen in 2015/2016). The calmness in the front-end, we think, should be attributed to PBOC liquidity management and forward book management that is keeping liquidity flush (chart 3). 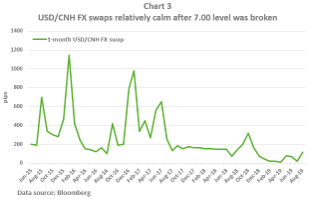 Despite calmness in the front-end of the forward curve, we still expect the RMB will depreciate further and finally reach 7.5 level against USD over the rest of the year as long as Beijing continues adopting a better-late-than-early strategy in dealing with the US on the trade matters.