PBOC announced on 10 October that the FX risk reserve ratio for forward USD purchases vs CNY would be lowered from 20% to 0% effective immediately. Before that, PBOC did the same thing in September 2017, leading to a 3-week rally of USD/CNH. However, this time around USD/CNH failed to gain much support from the reduction of the ratio. Instead, the pair resumed downtrend immediately as soon as a 2-day weak rally ended on 13 October. We attribute the sustained RMB appreciation regardless of the said policy change to a couple of factors.

First of all, China's balance of payments has been improving more notably this year than in 2017. With China getting the COVID-19 under control more effectively and having its productivity back to normal much earlier, its exports have shown rapid growth since the beginning of summer (chart 1). Meanwhile, from the perspective of capital flow, after experiencing a relatively large capital outflow in March, China saw an encouraging turnaround of the capital flow (chart 2). 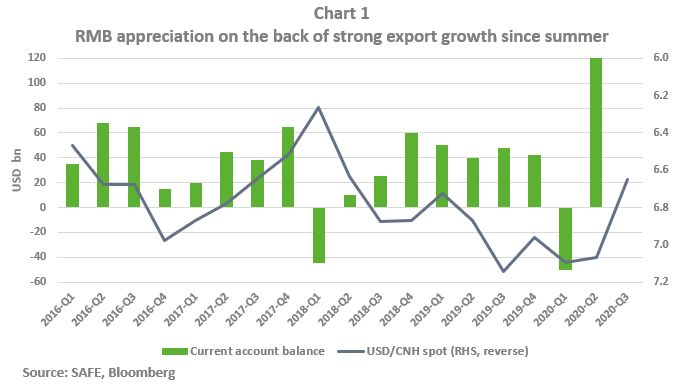 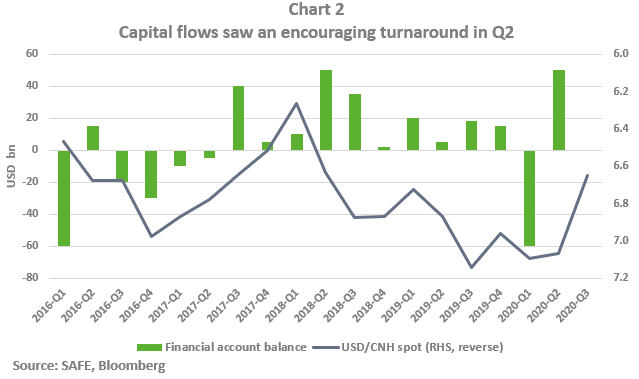 Secondly, PBOC so far this year obviously has been far less keen on using counter-cyclical factor (CCF) as a tool to curb RMB appreciation than the previous years. Narrowing of difference between actual onshore USD/CNY daily fixing and the average market model estimation is a good reflection of PBOC's growing bias against using CCF to curb RMB strength (chart 3). In our view, the top policymakers possibly have stronger preference for a strong RMB FX rate this year when the Trump administration is pursuing decoupling from China than in 2018 and 2019 when Trump was just in dispute with China mainly in trade and tariff issues. 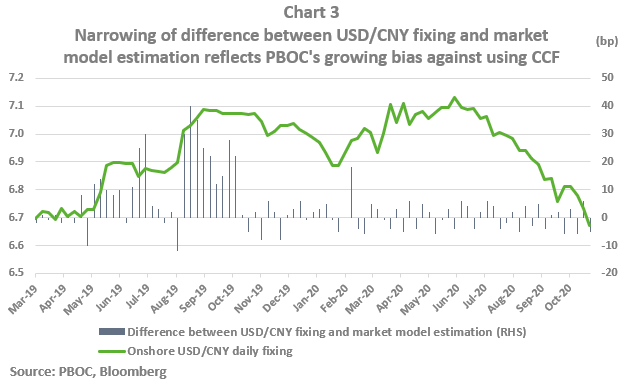 As a conclusion, further RMB appreciation looks quite justifiable on the back of the above factors. In our view, 6.60 is a very reachable level for USD/CNH in near term. A downside breach of this psychological support may ignite the hopes for a return of USD/CNH to 6.20-6.30 region that we did see in 2018.