PBOC once again raised the prospect of winding down its monetary easing policies, though the central banks in Europe may be considering to ease further amid the broadening of the second wave of COVID. On 6 November, PBOC official delivered remarks on the monetary environment at a conference.

Liu Guoqiang, PBOC vice governor: "Exit is a matter of timing, and it is also necessary. But the timing and method of exit need to be carefully evaluated, mainly based on the status of economic recovery". Sun Guofeng, PBOC director of the Monetary policy department: "The policy introduced during the special periods will be adjusted in due course". The remarks by Liu and Sun were very much in consistence with what PBOC governor Yi Gang said at Lujiazui forum back in June. At the forum, Yi said "we need to consider a timely exit of policy tools in advance".

Though PBOC's growing bias in favour of an exit of counter-pandemic monetary stimulus does not necessarily mean that monetary policy will be tightened immediately, it may result in a gradual reduction of liquidity supply. Chart 1 shows that liquidity so far this year has been notably tighter, despite the outbreak of COVID.

Heading into year-end, liquidity could turn tight much earlier and more severely than last year, reflecting PBOC's hawkish bias. As a matter of fact, 7-day and 1-month interbank repo rates in the week ending 13 November reached as high as 2.60% and 3.00% again, though year-end is still six weeks away (chart 2). 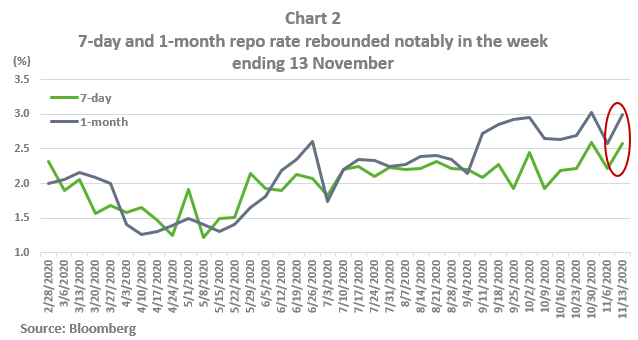 As far as the bond market is concerned, 10-year CGB yield set fresh year-high 3.26% in the same week (chart 3). We reiterate our medium-term view that 2019's year-high 3.44% is reachable and any significant downticks in the bond yields should be taken as selling opportunities. 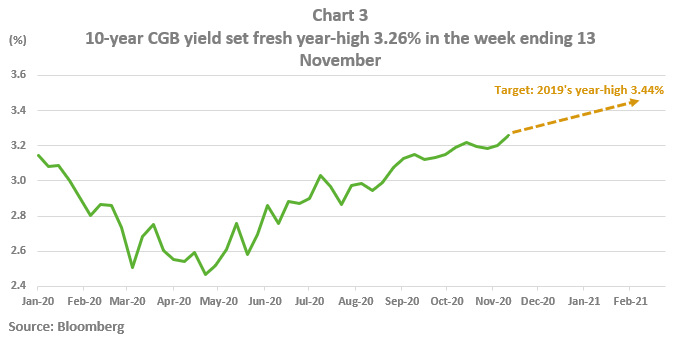