PBOC on 15 September conducted a CNY600bn 1-year medium-term lending facility (MLF), more than enough to roll over the same type of facility (sized at CNY200bn) that expired in the same week. Despite the rate being unchanged at 2.95%, the facility size was large enough to stir up speculation over a possible re-emergence of a looser liquidity environment before and after the upcoming Golden Week holiday.

However, what actually happened over the rest of the week suggested the surprisingly large MLF operation was mainly aimed at supporting market sentiment before the CGB auction held on 16 September. As soon as the auction was wrapped up, PBOC immediately showed its reluctance to let liquidity go any looser again. On 17 Sep, PBOC only conducted a small-sized 7-day OMO reverse repo, resulting in a re-emergence of net liquidity withdrawal (chart 1). 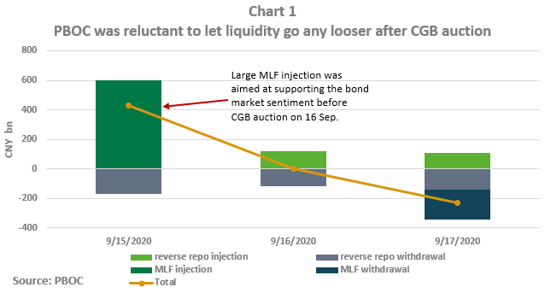 All of these signals indicate that PBOC is still biased in favour of a less ample liquidity environment, and that any liquidity loosening will unlikely last long. At the time of writing, the interbank 7-day repo is already back above 2.20%, 18bp higher than at the beginning of the week.

Heading into the Golden Week holiday in early October, we could see no significant change in PBOC's attitude, except for the routine pre-holiday liquidity adjustments.

In our view, the continued reluctance of PBOC to act generously will reinforce the market perception that the monetary easing cycle is already over and borrowing costs will be gradually creeping upward. In that case, there is a good chance we will see a strong selloff in bonds in October (chart 2).