China Insight: Implications of CGB Inclusion in The WGBI

As widely expected, FTSE Russell on 24 Sep in the New York afternoon announced that China Government Bonds (CGBs) will be included into the World Government Bond Index (WGBI), effective Oct 2021.

Major investment banks estimate that CGBs would receive a weighting of around 5.7% in the WGBI. Assuming AUMs benchmarked to WGBI index is around USD2.5tn, the inclusion would result in USD142bn inflows to the CGB market.

Assuming the phasing-in will last for 20 months, same as the time frame set for Bloomberg Barclay's Global Aggregate Index inclusion, CGBs will receive USD7bn inflows per month as a result of WGBIs month-end rebalancing.

Once included, China will become the second highest-yielding country in the WGBI (chart 1), which should be very appealing to yield-seekers.

Preliminary estimates suggest total passive inflows brought by WGBI inclusion alone could increase CGB's foreign ownership to 12% by end-2022. That combined with active flows, which are mainly yield-driven, would push foreign investors' share of CGBs further to around 14.5% (chart 2). 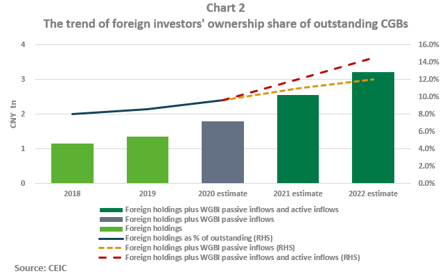 With regards to duration, the 3-year appears to be the best tenor across the CGB curve as it gives the widest yield premium over comparable US Treasuries (chart 3). 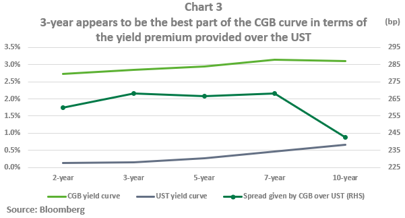