On 24 May, PBOC and CBIRC jointly announced to take over Baoshang Bank for one year due to serious credit risk. As far as we are aware, Baoshang Bank already showed multiple red flags on credit risk in 2017, with 28.8% y/y asset growth, around 30% of assets in receivable investments, 46% of loans in unsecured lending, and a decline of total CAR to 9.3% in the same year (vs the minimum requirement of 10.5% in the same year). We are surprised that the regulators did not step in until it was confirmed that 6 out of Baoshang's top 10 debtors had already defaulted on their debt obligations.

While balance sheet restructuring is underway, some protection is planned for Baoshang's depositors and creditors:


Nothing is certain yet for the outstanding BAOSHA bond issues due to lack of information released by the regulators so far. However, the third point listed above opens the possibility of a 20% and 30% haircut for the CNY6.5bn BAOSHA 4.8% Dec 2025 Tier 2 CNY-denominated onshore bond issue, which somehow is still trading at around 99% of the par value.

After the Baoshang takeover was announced, we have seen a few changes in the onshore negotiable certificate of deposit (NCD) market dynamics:

1. Sharp decline in the issuance scale of onshore NCDs (chart 1); 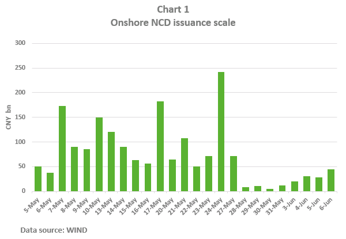 2.  Notable fall in the success rate of issuance, led by AA+ rated as well as AA rated and below issuers (chart 2); 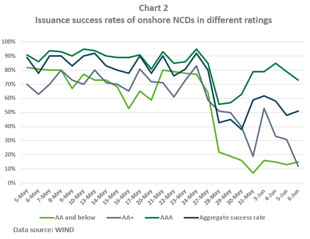 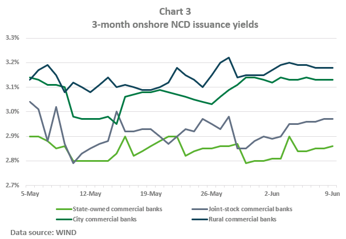 Baoshang’s case unlikely marks the start of a series of takeovers. However, we should be wary of the credit risk of small Chinese banks from now on and we expect to see more divergence among China banks in terms of funding costs.