Ant Group announced a delay of its IPO (supposed to be the world's biggest IPO of all time) on 3 November. Before the delay was announced, CBIRC and PBOC on 2 November jointly published the consultation paper for "Provisional Rules on Online Microcredit Business", which proposed a package of new measures against online microcredit companies (OLMCCS), including Ant Group.

In our view, the new measures are aimed at exerting more control over online microcredit companies for the sake of the major state-owned banks.

Of the new measures, two are particularly worth noting. First, lending outside home province (i.e. the province at which OLMCCS concerned is headquartered) is banned unless special approval is obtained from CBIRC. Second, 30% funding contribution by OLMCCS is required for each online loan transaction. These two measures, we think, are going to curb the online lending by OLMCCS quite effectively, as a result prompting the small banks (i.e. the sources of funds for OLMCCS' online lending business) to re-park their funds with interbank market instruments. As such, onshore interbank CNY 7-day repo, which already dropped sharply from 2.40% to 2.00% in the week of 2-6 November as a result of huge pool of Ant Group A-share IPO subscription money being released back to the banking system, may continue to be upside-limited in near term (chart 1). The newly-introduced rules on OLMCCS will likely help delay or relieve the seasonal liquidity tightening into the year-end.

As far as the bond market is concerned, we think 10-year CGB yield will be consolidating below 3.20% possibly with downward bias for a while (chart 2). However, we reiterate our medium-term view that 2019's year-high 3.44% is reachable and any significant downticks in the bond yields should be taken as selling opportunities. 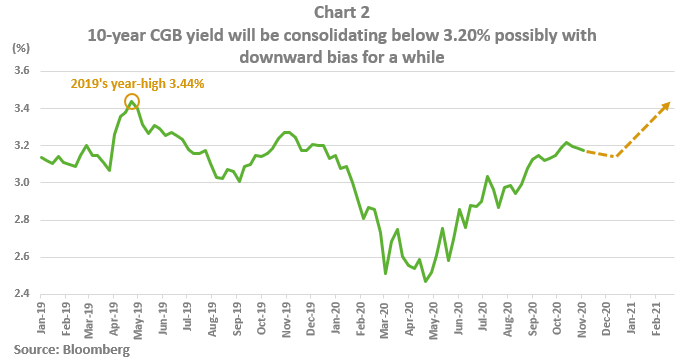