China Insight: Government May Re-focus on Deleveraging Later This Year?

PBOC's takeover of Baoshang Bank for one year due to serious credit risk in May and its provision of credit enhancement to a NCD issue by Bank of Jinzhou in June, suggest some Chinese small banks are suffering a deterioration of their balance sheet quality. The main reason for that, we think, is a growing difficulty of small banks' debtors to meet their debt obligations.

Since Boashang and Jinzhou cases were widely reported by the onshore media, interbank lenders have become increasingly worried about the credit risk from smaller and weaker financial institutions. This is reflected by the spike in the yield on 6-mth negotiable certificates of deposit (NCD) for AA+ and AA rated banks, signaling heightened concerns for lower rated banks (chart 1). Tighter interbank liquidity for weaker financial institutions spilled over to tougher financing conditions for asset managers, with Bloomberg reporting that a number of repo transactions have defaulted. 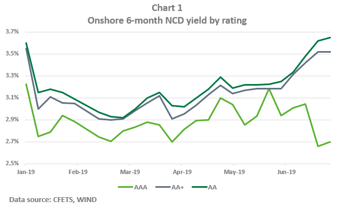 We are not sure whether repo defaults we have recently experienced are due mainly to liquidity shortages or credit problems. Admittedly, the pace of onshore bond defaults this year is similar to the pace we saw in 2018, suggesting there is no sharp deterioration in corporate credit risk. However, with the US-China trade war de-escalating, President Xi may pursue financial deleveraging again later this year, even at the expense of a moderate increase in credit defaults. As a matter of fact, we are quite surprised that corporate bond issuance has been weak since May, regardless of the falling financing costs and moderate releveraging being underway (chart 2). 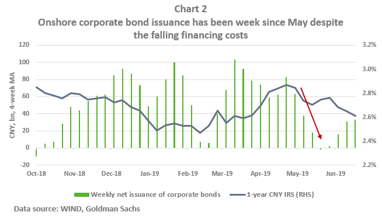 In spite of a slowdown from the high of USD16bn in May, aggregate bond inflows recorded USD11bn for June. CGB had decent USD4bn inflows, slightly higher than May's USD3.6bn. Inflows to NCD saw decent increase to USD4.7bn from USD3.7bn in May, thanks to PBOC's decision to bail out Baoshang. In contrast to the above-said categories, corporate bonds failed to see a notable increase in inflows in June. 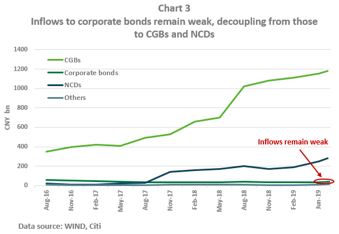